Olive branch to Israel, olive oil for Palestinians from Turkey 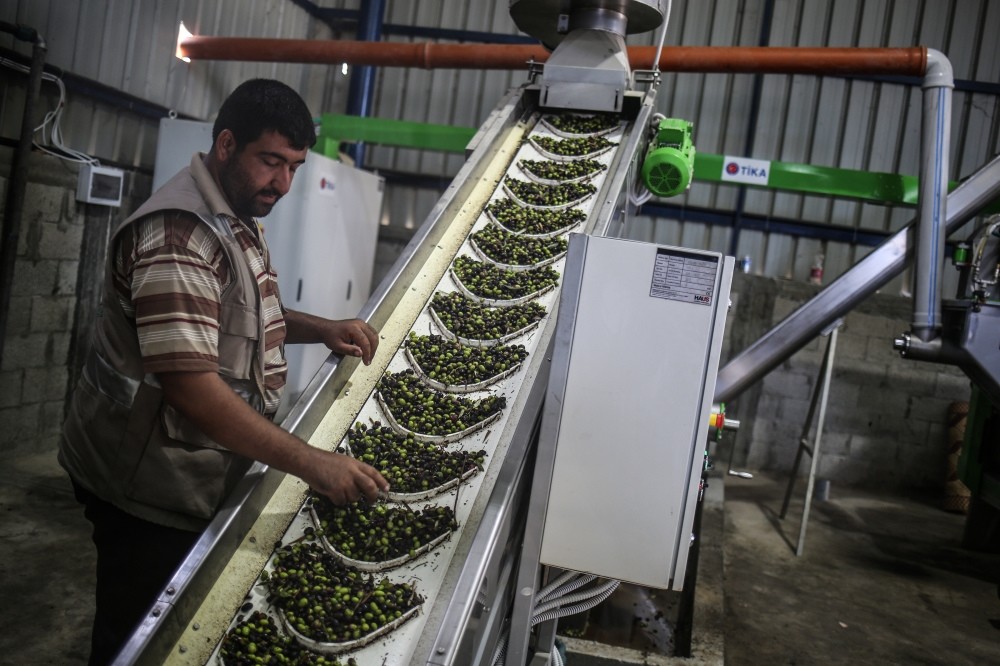 The plant is expected to boost olive oil sales for local farmers as it will accelerate production, a significant aid to the stunted economy of the Gaza Strip.
by Daily Sabah with AA Oct 18, 2016 12:00 am

An olive oil plant built by state-run Turkish Cooperation and Coordination Agency (TİKA) looks to help further economic self-sufficiency for Palestinians facing an Israeli blockade. The plant opened in Abasan al-Kabira, a small town thriving on agriculture in Khan Younis in the Gaza Strip, and is the latest instance of income-generating projects by Turkey for Palestinians. It comes amid Turkey and Israel's reconciliation efforts following a downgrade in ties due to Turkey's opposition to the Gaza blockade and notorious Mavi Marmara incident. The TİKA-built plant, which will be run by the local municipality, aims to improve olive oil processing in the region, a hub of olive growers in the southern Gaza Strip.

Speaking at an inauguration ceremony, Bülent Korkmaz, a TİKA representative for Palestinian territories, said the construction started in 2012 for the plant and was completed "despite Israeli blockade." The plant, that cost about $400,000, will give Palestinian farmers "an opportunity to sell their produces for better prices and thus, improve agriculture in the region," Korkmaz said. A TİKA official pledged that the agency will continue developing projects for Palestinians. Abasan al-Kabira Mayor Mustafah Alshawaf thanked TİKA for the plant and said it would help sustain agriculture in Khan Younis, the second largest city in the Gaza Strip. Alshawaf said the plant will save farmers time in olive oil extraction as well as help them to boost their funds in olive oil sales.

The olive oil plant comes at the heels of an aid campaign launched by Turkey following a deal with Israel. Turkey has sent two vessels full of humanitarian aid to Palestinian territories since July to address the immediate needs of Palestinians in the face of the Israeli blockade.

Turkey and Israel recently cemented a deal to restore their strained relations, and in dispatching the aid vessel, Turkey's first step after the deal was a show to make clear that it has not turned its back on Palestinians despite the normalization of relations with the Israelis.Apart from delivering humanitarian aid and construction of the olive oil plant, Turkey will carry out projects to rebuild Gaza and improve the lives of thousands who have suffered from Israel's attacks in the territory. They include the construction of residential buildings and a 200-bed Turkish-Palestinian Friendship Hospital. TİKA recently unveiled a $13 million project to build 320 housing units in the Gaza Strip for Palestinians whose houses were demolished in the 2014 Israeli military offensive.

Relations between Turkey and Israel declined over the past few years as the Justice and Development Party (AK Party) government in Ankara became more vocal in its criticism of Israel's treatment of Palestinians. The final straw came in May 2010 when the Mavi Marmara, among six civilian vessels trying to break Israel's blockade of Gaza to deliver aid, was raided by Israeli commandos. Nine Turkish activists and one Turkish-American were killed in the raid. Public outrage in Turkey led to massive protests against Israel and the suspension of diplomatic ties. Turkey formally asked Israel for an apology and compensation for the families of the victims and demanded the removal of the Gaza blockade as conditions to normalize relations. Although Israel was initially stubborn, it eventually accepted talks to restore ties. The talks culminated in a deal announced in June. Israel agreed to Turkey's humanitarian presence in Gaza and accepted that a payment of $20 million compensation would be given to the families of the Mavi Marmara victims.

Since 2007, the Gaza Strip has suffered a joint Israeli-Egyptian blockade that has deprived the enclave's roughly 1.9 million inhabitants of their most basic needs, especially food, fuel, medicine and construction supplies.

The Gaza Strip largely depends on foreign aid as the economy stalled under the Israeli blockade and apart from small industries, industrialization is almost non-existent. Agriculture in the region, where strawberries, olives, citrus, dates and several other species are grown, is viewed as a key to revive the economy. Apart from Turkey, international aid organizations help Gazans to diversify agriculture while the United Nations Food and Agriculture Organization (FAO) helps aquaponics farming, enabling locals to grow crops in their rooftop gardens.
RELATED TOPICS