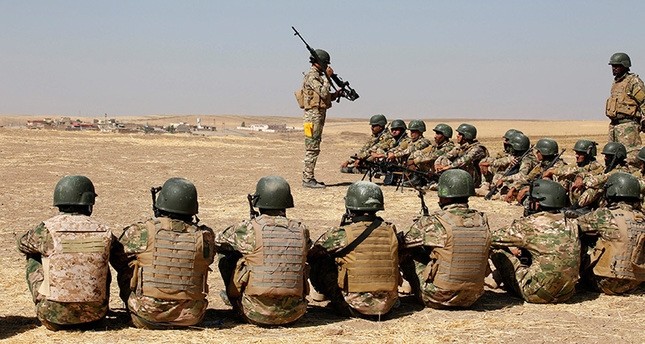 Fighters from predominantly Sunni Arab forces take part in a training session before the upcoming battle to recapture Mosul in Bashiqa, October 6, 2016. Picture taken October 6, 2016. (Reuters Photo)
by Daily Sabah with Reuters Oct 21, 2016 12:00 am
Turkey and Iraq have reached an agreement in principle that could eventually allow a Turkish role in the campaign to retake Mosul from Daesh militants, U.S. Defense Secretary Ash Carter said on Friday after talks with President Tayyip Erdoğan.

President Erdoğan has previously voiced frustration that NATO member Turkey has not been more involved in the U.S.-backed assault on the Iraqi city, once part of the Ottoman empire and still seen by Turkey as firmly within its sphere of influence.

Iraq, meanwhile, views Turkish military moves on its territory with apprehension and any agreement on Mosul would defuse a major source of tension between the neighbours.

As tensions recently increased between Turkey and Iraq due to a statement by the Iraqi central government which said that Turkish military units stationed in Bashiqa camp near Mosul were "occupying forces" and "should be immediately withdrawn," it was Iraqi Prime Minister Abadi himself who had originally demanded help from Turkey in anti-Daesh campaign.

In a 2014 press conference with then-Prime Minister Ahmet Davutoğlu, Abadi said that his government demanded "military, intelligence, arms and training support" from Turkey and help from "every neighboring country."

Carter then made clear that details on Turkey's potential role in the unfolding Mosul campaign still needed to be "hammered out" and a senior U.S. defense official noted that non-military assistance was also a possibility.

"That will obviously have to be something that the Iraqi government will need to agree to and I think there's agreement there in principle," Carter told reporters travelling with him in Turkey, voicing his own conditional support for some type of Turkish role in Iraq.

"But now we're down to the practicalities of that ... and that's what we're working through."

Turkey has been at odds with Iraq's central government over the presence of Turkish troops at the Bashiqa camp near Mosul, where it has trained thousands of forces to fight against Daesh.