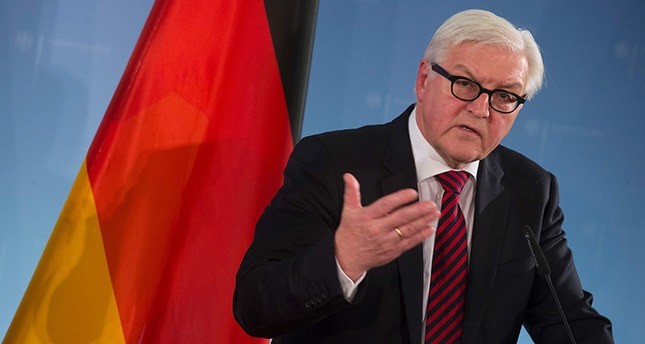 German Foreign Minister Frank-Walter Steinmeier announced Thursday he will visit Ankara on Nov. 15 amid tense relations between the two countries.

Ties between Germany and Turkey have been strained in recent months, largely due to what Ankara says is Berlin's reluctance to take strong action against terrorist groups.

Steinmeier's visit will be his first after the defeated July 15 coup, which killed 246 people and wounded around 2,200 others.

"This [coup] was an attack directed to the heart of Turkish democracy," Steinmeier said during a parliamentary debate in Berlin on Thursday.

He added: "We feel admiration for people who showed great courage that night to preserve [the] constitution and democratic institutions."

"We condemn every kind of terrorism, including the PKK, and we struggle against this with all the means of the state. This is our position and it will remain like this," he added.

Steinmeier also said Germany needed Turkey's ties with the EU. He added they will "disappoint" many people in Turkey, "if we close the door to Turkey and throw away the key."

President Recep Tayyip Erdoğan on Wednesday called on the EU to make a final decision on Turkey's accession to the union.

Speaking ahead of an annual EU report assessing Turkey's progress on EU membership and visa-free travel, Erdoğan said: "They shamelessly say that Turkey's EU negotiations should be reviewed. You are late. Review it as soon as possible."