PM Netanyahu thanks Turkey for plane to fight Israel's wildfires 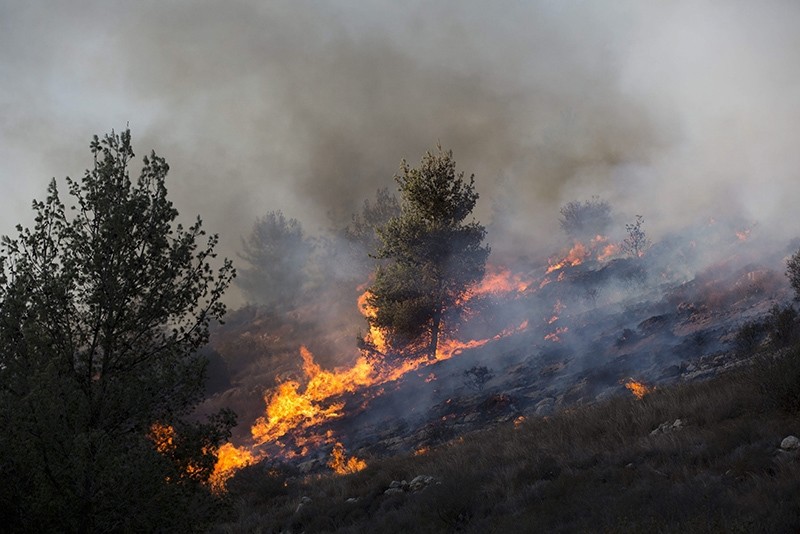 The Turkish Foreign Ministry announced that the country sent a plane to help Israel extinguish an outbreak of wildfires yesterday. Israel has been fighting wildfires around the country since Nov. 22 and has enlisted the aid of other countries as firefighters battle to put out flames damaging houses and forcing thousands to evacuate.

Anadolu Agency (AA) reported that Israeli Prime Minister Benjamin Netanyahu thanked Turkey for sending specialized aircraft to help put out the wildfires. Russia, Italy, Croatia and Greece have also offered to send planes to fight the blazes after Netanyahu asked for foreign aid, fearing a spread of the fires because of strong winds.

The military said it "deployed two Search and Rescue battalions in order to assist civilian efforts." It also called up about 500 reserve soldiers to back up the police and fire departments.

The rash of fires are the worst since 2010, when Israel suffered the single deadliest wildfire in its history. That blaze burned out of control for four days, killed 42 people and was extinguished only after firefighting aircraft from as far away as the United States arrived and brought it under control.

This week's fires were spread across several places in the country.

Around 50,000 people were evacuated from their homes and workplaces in the northern Israeli city of Haifa on Thursday as firefighters battled a series of bushfires, the local municipality said. Several roads and schools were also closed in the city. "Residents were taken to nearby places and are being tended to," Haifa municipality spokeswoman Or Doron said.

Police said the blazes started early Tuesday morning at Neve Shalom, a community outside Jerusalem where Israelis and Arabs live together.

Later, fires erupted in the northern Israeli area of Zichron Yaakov and elsewhere near Jerusalem. In all, hundreds of homes have been damaged and thousands of people have been evacuated. Approximately a dozen residents were treated for smoke inhalation.

In June, the two countries signed an agreement in Rome. According to the deal, Israel will pay $20 million in 25 days as a compensation for lost lives during the Mavi Marmara flotilla raid and Turkey will drop all cases against the incident.