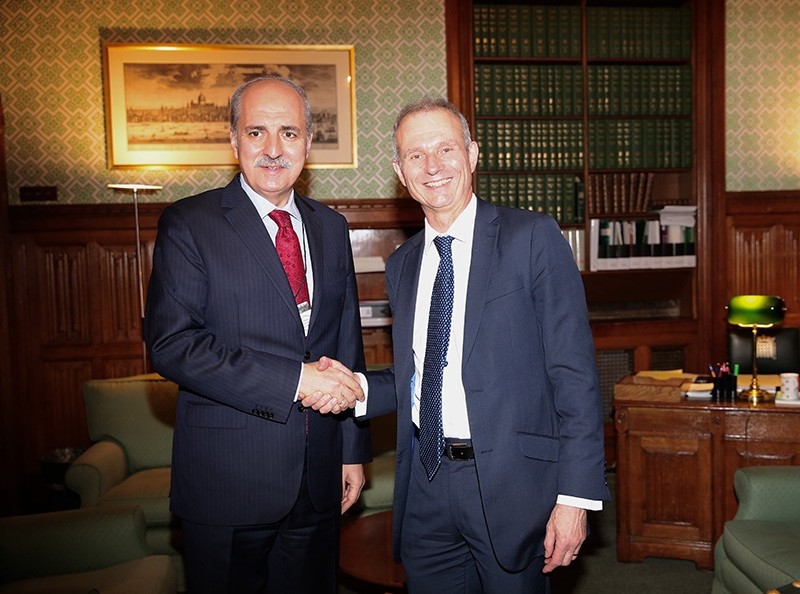 Turkish Deputy Prime Minister Numan Kurtulmuş on Thursday met House of Commons leader David Lidington as part of his visit to the U.K.

Kurtulmuş and Lidington discussed a wide range of issues, including the aftermath of the recent coup attempt in Turkey, peace talks on the Cyprus issue, developments in Syria and Ukraine and Turkey's war on terror.

Kurtulmuş stressed that Europe fails to understand the damage caused by the Gülenist Terror Group (FETÖ) in Turkey but thanked the U.K. for its prompt response in the first days following the July 15 overthrow attempt.

Regarding Turkey's recent rapprochement with the Shanghai Cooperation Organization amid problems with the European Union, Kurtulmuş said that Turkey's foreign policy is not changing axis and the country wants to diversify 'multilateral' foreign policy in line with national interests.

Kurtulmuş said that the United Nations and other international bodies have lost the ability to solve world political problems.

He added that the country faces threats from three terrorist organizations, namely the PKK, Daesh and Gülenist Terror Group (FETÖ) and needs the support of western organizations in war against terror.

Kurtulmuş also stressed that the fight against FETÖ, accused of launching the coup attempt on July 15 killing 246 people and injuring nearly 2,200 others, will continue for some time.

Earlier in the day, Kurtulmuş spoke at a reception held at the Yunus Emre Institute for Teachers' Day, in which he criticized the European Parliament's decision to halt Turkey's ascension to the EU. "Turkey does not deserve or accept such a thing. This decision is null and void for us," he said.

Kurtulmuş will continue meetings in London on Friday, including at Chatham House, the Royal Institute of International Affairs and will meet with representatives of the Turkish community.