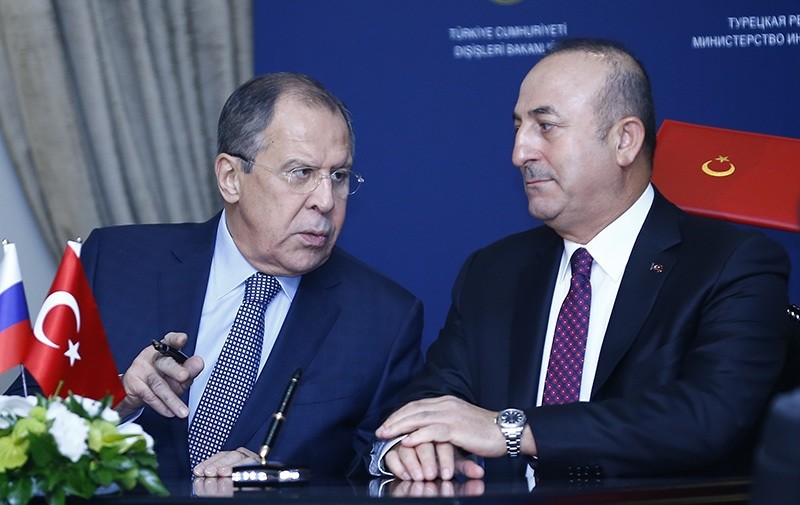 Senior Turkish and Russian officials underlined the urgent need for a cease-fire in Syria to end the humanitarian tragedy in Aleppo and facilitate a political solution. Meanwhile, President Erdoğan said Euphrates Shield has only targeted terrorists, not individuals or countries

Turkey and Russia have expressed their determination in establishing a permanent cease-fire to facilitate a political solution in Syria amid the ongoing humanitarian crisis following the recent fierce bombing campaign by the Assad regime to capture all of Aleppo from the opposition forces which has left more than 600 civilians dead in the past few weeks.

Lavrov, however, also vowed that Russia would continue its operations in eastern Aleppo and would rescue the city from what he described as "terrorists."

Despite few disagreements over the Syrian crisis, Turkey's foreign minister said, "We are in agreement that a cease-fire is needed so that this tragedy can come to an end."

The military operation was not aimed at any individual or country, he added. Turkey sees the Assad regime as having lost legitimacy and is pushing for a political transition without Bashar Assad. Russia, meanwhile, has been trying to preserve Assad's continued rule over the country.

Erdoğan's remarks came a day after he spoke with his Russian counterpart, Vladimir Putin, where, according to presidential sources, the two leaders highlighted the importance of ending the humanitarian tragedy in Aleppo and the need for a cease-fire.

In recent weeks, the U.S.-backed PYD has been cooperating with the regime in Aleppo. In fact, a statement released by Syrian Turkmen Assembly earlier this week had confirmed that the terrorist PYD had "completely destroyed" six of eastern Aleppo's predominantly Turkmen districts. Russia and the Assad regime, on the other hand, see the moderate FSA as a terrorist group.

Both the Turkish and Russian foreign ministers yesterday stressed that an immediate political solution is necessary, as Çavuşoğlu said, "If there is no political solution in Syria, if there is no national unity, if its territorial integrity is not ensured, you may clear it of Daesh today, but tomorrow another organization will appear… The swamp must be drained and for that, a cease-fire is needed, humanitarian aid is needed."

Underlining that the normalization of relationship between Turkey and Russia will give momentum to bringing peace in Syria, Russia's Lavrov said, "Though there is currently a layover in the negotiations [toward peace talks], the international community must also aid in giving some momentum to the negotiations… The cooperation between Turkey and Russia is to continue with concrete steps."

Located 40 kilometers (25 miles) from the Turkish border, Aleppo is Syria's second-largest city that used to be home to around 3 million people, mainly Arabs, including 400,000 Turkmens and 200,000 Kurds.

A year after the outbreak of the Syrian revolution in 2011, opposition forces took control of the city's eastern districts.

In 2013, the Assad regime began a campaign of indiscriminate bombardment on the city that has triggered a humanitarian crisis in the war-battered city.

During the meeting in Antalya, Turkey and Russia agreed on hastening the normalization process by lifting all sanctions as well as working on visa-free travel between the two countries. Çavuşoğlu said Turkey's stance on Assad was unchanged. The relations between Turkey and Russia were strained after a Russian jet was downed by Turkey over violation of airspace on Nov. 24, 2015. In response, the Russian government imposed sanctions on Turkish goods. The normalization process, which began in June, has paved the way for the lifting of sanctions.

Exactly a year after on Nov. 24, 2016, three Turkish soldiers were killed with 10 others wounded in an air attack against troops participating in operations against Daesh. Turkey has accused the Syrian regime of carrying out the attack. Responding to a question on this issue, Lavrov said that neither Moscow nor Damascus were behind the airstrike.

Çavuşoğlu also commented on the matter and said "during the initial period of our normalization, I told my counterpart Lavrov that it would be beneficial for them to speak to the moderate oppositions and he had once more affirmed that they are ready to speak to everyone including the opposition. We have never denied Russia's constructive role in Syria, even during the rift. It is very normal for Russia to also speak to the opposition group as well." He said, "There could only be a permanent resolution when there is a comprehensive system available."