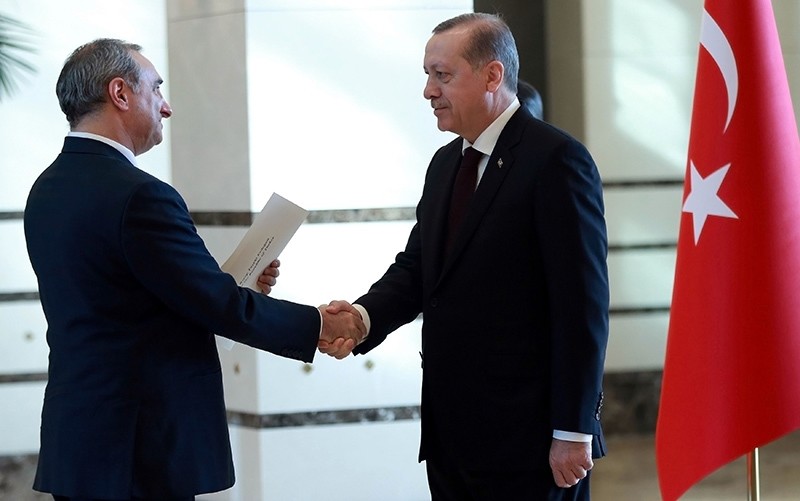 Israeli ambassador to Turkey Eitan Naeh (L) presents his letter of credence to Turkish President Recep Tayyip Erdogan (R) at the presidential Complex in Ankara, on December 5, 2016 (AFP Photo)
by Daily Sabah with Agencies Dec 05, 2016 12:00 am

As part of the steps taken in the new positive relations between Israel and Turkey, Israel's newly appointed Ambassador to Ankara Eitan Naeh (L), has presented his credentials to President Recep Tayyip Erdoğan Monday, becoming Israel's first ambassador to Turkey since the souring of bilateral relations nearly six years ago. Naeh was received by President Erdoğan in Ankara at the Beştepe Presidential Complex, with accompanying family members, as well as diplomatic staff from the embassy. Meanwhile, President Recep Tayyip Erdoğan announced in September the appointment of a former foreign policy adviser Kemal Ökem as Turkey's new ambassador to Israel. Likewise, Ökem is expected to assume his duties in Tel Aviv next week.

One of the Turkish nationals, Uğur Süleyman Söylemez, died in the hospital in 2014 after being in a coma for almost four years. The raid caused relations between Turkey and Israel to nose-dive, which the U.S. has been trying to rescue ever since.

Naeh is an experienced diplomat regarding relations with Turkey. He served as the second and first secretary in Ankara between 1993 and 1997, after which he was appointed as the head of the Turkish-Greek and Cyprus desk in the Ministry of Foreign Affairs in Jerusalem in 1999, a title he held for 10 years.

This focus of Naeh also indicates that energy issues, mainly concerning the Eastern Mediterranean gas fields, will be among the top priorities of bilateral relations between two countries. Prior to Ankara, Naeh was the current Deputy Head of Mission (second ambassador) at the Israeli Embassy in London since 2013, and previously served as Ambassador of Israel to Azerbaijan. Prior to Naeh, Gabby Levy was the Israeli Ambassador to Ankara until September 2011. However, her duty was suspended after relations between the two countries soured over the 2010 Mavi Marmara incident.

Israel agreed to increase reparations for the victims to $20 million and a draft of an agreement between the two states was written in February 2014. The countries also agreed that the Turkish Parliament would drop the lawsuits against the Israeli soldiers who were involved in the raid with a new law. Israel paid $20 million (18 million euros) in compensation in September and offered an apology over the raid and granted permission for Turkish aid to reach Gaza.