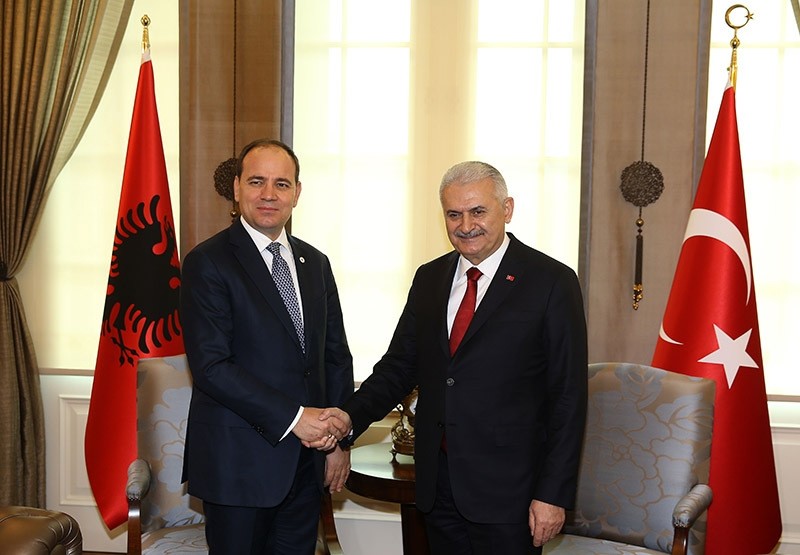 Prime Minister Binali Yıldırım met Albanian President Bujar Nishani and his delegation at the Çankaya Palace in Ankara on Wednesday.

During the meeting, Prime Minister Yıldırım stated that Turkey attached great importance to bilateral relations with Albania, which has origins in common history, and within this context would continue to improve already close political dialogue as well as cooperation in areas such as economy, trade, agriculture, tourism and transport.

Yıldırım also affirmed that another important area of cooperation was war on terrorism, underlining that Turkey was simultaneously fighting against terrorist organizations such as the PKK, Daesh and the Gülenist terror cult (FETÖ). The Prime minister stated that within this context Turkey placed importance on continuing cooperation against FETÖ, which poses a threat to stability and security in all the countries it is present.

The Prime Minister informed President Nishani about Turkey's large-scale infrastructure projects that have been completed or are still under construction, such as the Eurasia Tunnel, Yavuz Sultan Selim Bridge, Osmangazi Bridge and Istanbul's third airport, while also explaining the financing models of these projects.

Albanian President Bujar Nishani indicated that Albania was in solidarity with Turkey after the July 15 failed coup attempt, confirming that his country was willing to improve cooperation with Turkey in every area including war on terrorism, and would continue to make joint effort within this context.