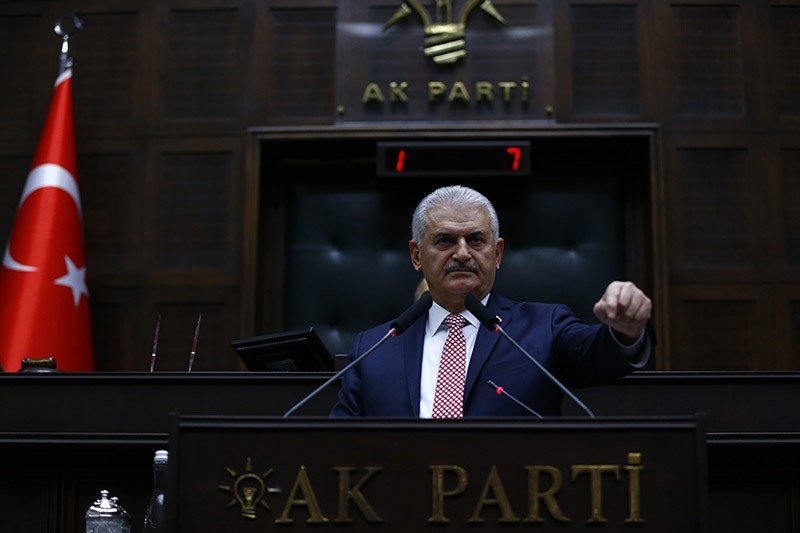 Turkey-U.S. relations have been on tenterhooks in recent months, as Turkey had urged that all elements affiliated with the PKK terrorist group to leave Syria's Manbij, located on the western banks of the Euphrates River, and cross back to the river's eastern banks after they help local Arab forces liberate the town from Daesh.

However, despite U.S. pledges to withdraw the PYD's armed wing, the People's Protection Units (YPG), the terrorists resumed advancing west of the Euphrates.

At the weekly meeting of the Justice and Development Party (AK Party) on Tuesday, Prime Minister Yıldırım stressed that the Obama administration was responsible for arming YPG terrorists in Syria, and boosting terror attacks against Turkey.

"What the U.S. does against terror is arming the terrorist YPG in Syria and this directly causes a rise in terrorist attacks against Turkey. I hope that the new [Trump] administration will put an end to this vileness, as it is now time for friends and foes to clearly separate themselves from each other," the prime minister said.

"For years, Turkey and the U.S. have been NATO allies and these rooted relations should not be left in the shade of a terrorist group. But now it is time to decide whether you are with Turkey or with the terrorists," Yıldırım added.

"They [referring to the U.S.] are pretending to fight Daesh. Turkey is the only country that is leading a fight. Neither the others [referring to the coalition] nor the U.S. is doing anything [against Daesh]. It's all talk and no action," he said.

While Ankara considers the YPG a terrorist group and the Syrian-offshoot of the outlawed PKK, which itself is listed as a terrorist organization by the U.S., Turkey and the EU, Washington insists on not recognizing the PYD-PKK affiliation.

In fact, Ankara has repeatedly argued that YPG forces have been ousting the Arab and Turkmen locals from areas which have been cleared of Daesh, in an aim to change the demographics of the region and assume full control of the captured areas.

Both President Recep Tayyip Erdoğan and Prime Minister Yıldırım in that respect have repeatedly voiced concern over such adjustments, saying the fight against Daesh should be executed through the support of local forces.

However, Ankara's calls were ignored by the U.S. as it continued to support the Syrian Democratic Forces (SDF), which is predominantly led by the YPG, and labeled it "the anti-Daesh coalition's most effective partner in the fight against the terror group."

Though the U.S. Embassy in Ankara released a statement on Dec. 28, 2015 claiming, "The U.S. Government has not provided weapons or explosives to the YPG or the PKK," evidence from October 2015 reveals that the U.S. had airdropped almost 50 tons of ammunition in Syria's Hasakah region. Subsequently, opposition fighters said that they had not received the ammunition and the PYD terror group leader Salih Muslim later went on to thank the U.S. for the supplies.

Polat Can, known as the spokesman and one of the founders of the YPG, shared a photo on his Twitter account showing him presenting a placard to McGurk.

While Washington had previously sent military advisers and arms to Kobani, to assist the YPG in its offensive on Manbij, on May 25, several photos appeared in media showing U.S. soldiers wearing the insignias of the YPG and Women's Protection Units (YPJ).

Regardless of the Obama administration's ignorance in recognizing the PYD/YPG as an offshoot of the PKK, U.S. Secretary of Defense Ashton Carter, in a testimony before a Senate panel at the U.S. Congress in April, confirmed links between the two.

Additionally, in February 2016 Washington's former envoy to Ankara, Francis Ricciardone, in remarks at the Assembly of Turkish American Associations' annual gathering, said that the U.S. should acknowledge the PYD and its YPG militia as part of the PKK.