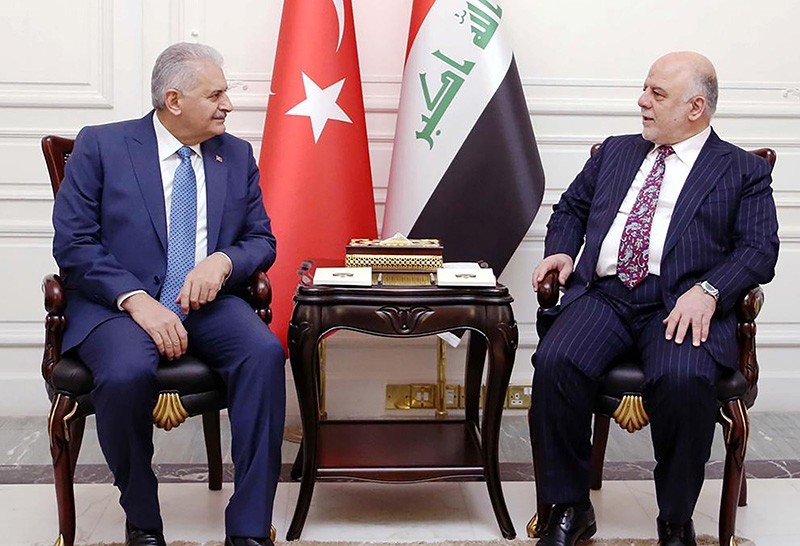 Prime Minister Binali Yıldırım arrived in the Iraqi capital Baghdad on Saturday in a visit that will officially mark the end of the diplomatic spat between two countries and start a new dialogue for cooperation in key areas such as the fight against Daesh and PKK terror, in addition to trade, energy, and water.

A meeting closed to the press was held between Yıldırım and his Iraqi counterpart Haidar al-Abadi. Further meetings are expected to take place with Iraqi President Fuad Masum as well as Speaker of Parliament Salim al-Jabouri.

In a joint press conference with Abadi after the meeting, Yıldırım said that the issue of Turkish troops in Bashiqa camp near Mosul will be solved with Iraq in a friendly way in line with clearing Daesh terror group. Explaining that the troops were stationed in Bashiqa out of a necessity, Yıldırım said that great measures have been covered to clear Daesh from the region.

Yıldırım added that the two parties have agreed to make the necessary efforts will be made in coordination with Peshmerga and Iraqi troops to clear Sinjar from terrorist elements, referring to PKK presence in the area. "For us, terror is the same no matter where it comes from. Therefore, Sinjar poses a primary threat for Turkey and we thank the Dear Prime Minister's sensitivity to leave this threat aside. We are ready to do the necessary cooperation in this issue too," Yıldırım said.

Yıldırım expressed his gratitude to Abadi for his latest statement which said that Iraq won't allow the PKK to use its sovereign territory to damage Turkey.

Noting that the trade volume between Turkey and Iraq have fallen from $12 billion in 2012 to $7 billion in 2016, Yıldırım said that reasons for the decrease is apparent and the issue had been covered in the meeting.

A joint statement released later Saturday said that Iraq and Turkey vowed "not to allow any terrorist organizations on their lands" and to jointly work in terrorism combat.

"The Turkish side has emphasized its commitment to Iraq's unity and respect for its sovereignty."

The Iraqi side said that their stance for the Bashiqa camp issue remains the same and the Turkey should withdraw its forces from the camp to resolve the issue.

The visit marked the end of the diplomatic crisis between the two countries that surfaced after the Iraqi government demanded that Turkey withdraw its troops from Bashiqa, which is a base for the Turkish military to train the Peshmerga in their fight against Daesh terrorists.

Sources from both sides have said that the visit would provide an opportunity to share their respective positions on recent regional developments and promote enhanced bilateral ties.

Turkey has a longstanding military training mission at Camp Bashiqa, where Turkish soldiers have trained both Peshmerga fighters and local tribal volunteers in combat techniques. The fighters are trained by Turkish military to fight against Daesh terrorist group, especially for their bid to take Mosul back.

In recent months, the mission's presence in Mosul in northern Iraq has led to tension between Baghdad and Ankara amid calls by some Iraqi lawmakers for Turkish troops to withdraw. The relations have recently seen a thaw as the Iraqi premier stated that bilateral relations are "back on track" with Turkey.

Abadi also announced that about more three months were needed to remove Daesh from Iraq.

Abadi announced the new plan after responding to comments by the commander of the U.S.-led coalition supporting Iraqi forces that it would take as long as two years to eliminate Daesh and its cells in Iraq and neighboring Syria.

The PKK's presence in Sinjar near Mosul is also another issue that is likely to be discussed during Yıldırım's visit in Iraq.