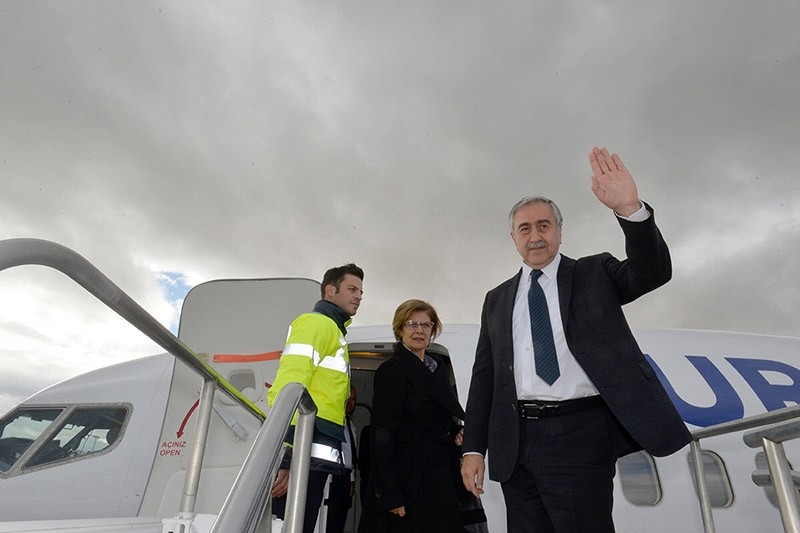 Turkish Republic of Northern Cyprus (KKTC) President Mustafa Akıncı said Sunday he expects talks in Geneva this week on reunifying Cyprus to be "tough" but expressed hope that the negotiations could lead to a new era.

Akıncı is scheduled to meet with his Greek Cypriot counterpart Nicos Anastasiades on Monday for talks billed as a historic opportunity to end the island's decades-old division.

Leaving for Geneva from Ercan Airport outside Nicosia, Akıncı told reporters that the talks marked a "crossroads" and it was vital to "achieve positive results and not just meet up".

"We are not at a point where Geneva will mark the final conclusion. We need to be cautious," Akıncı said.

"We are not pessimistic but we shouldn't assume everything is done and dusted. We are expecting a tough week."

Sticking points in the talks are set to be the presence of Turkish troops on the island, property issues and how much of the island is controlled by each of the two components of a future bizonal federation.

After bilateral talks, the two Cypriot leaders will be joined from Thursday by the island's three guarantor powers -- former colonial ruler Britain, Greece and Turkey.

"If all the sides show responsibility and determination... it will be possible to start a new era where both communities can live in equality, freedom and security," Akinci said.

He said the Turkish Cypriot side wanted to see a bizonal federation with a rotating presidency."If it's not possible to reach a mutually acceptable solution, the TRNC has the option of continuing as a democratic and secular society," he added.

U.K. Prime Minister Theresa May and Turkish President Recep Tayyip Erdoğan agreed in phone call on Saturday that necessary efforts must be made in order to reach a solution, and stressed the importance of reaching a settlement on the divided island.

Turkish troops had organized a military operation to the island to restore peace and to secure the rights of Turkish Cypriots, following an Athens-inspired Greek Cypriot coup seeking union with Greece.