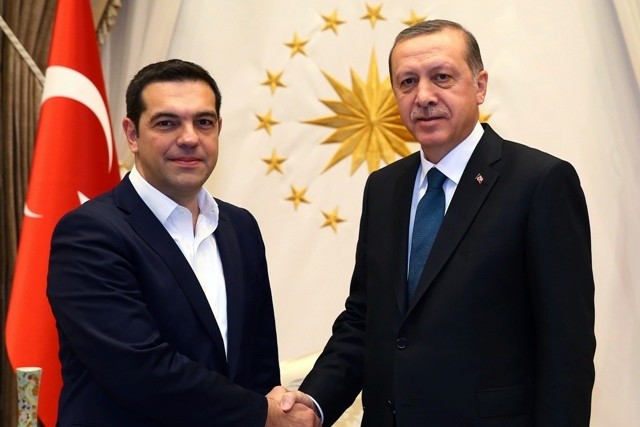 President Recep Tayyip Erdoğan and Greek Prime Minister Alexis Tsipras held a phone call late Monday in which they discussed the ongoing Geneva talks, reiterating its importance for the reunification of the long-divided Island.

According to information obtained from presidential sources, both parties stated that a constructive approach to the issue is crucial for the island. Emphasizing the importance of the current five-party Geneva talks, Erdoğan and Tsipras said that a positive outcomes were expected from the diplomatic effort.

Tsipras said earlier that he is ready to attend the Cyprus talks with top level representatives.

While Greece and the Greek Cypriot administration wants President Erdoğan to attend the meeting, it is said that they do not have information on whether he will.

The President of Turkish Republic of Northern Cyprus Mustafa Akıncı, and the leader Greek Cypriot Administration of Southern Cyprus Nicos Anastasiades gathered at the U.N. in Geneva earlier on the same day in an attempt to resolve outstanding final issues that could see the island reunified after four decades of division.

Akıncı and Anastasiades met for several days of closed-door meetings in Switzerland under the auspices of the U.N.'s Cyprus envoy, Espen Barth Eide.

President Erdoğan previously discussed the Geneva talks with U.N. Secretary-General Antonio Guterres and British Prime Minister Theresa May on Saturday. They agreed that the upcoming negotiations could be an important opportunity in reaching a final settlement.