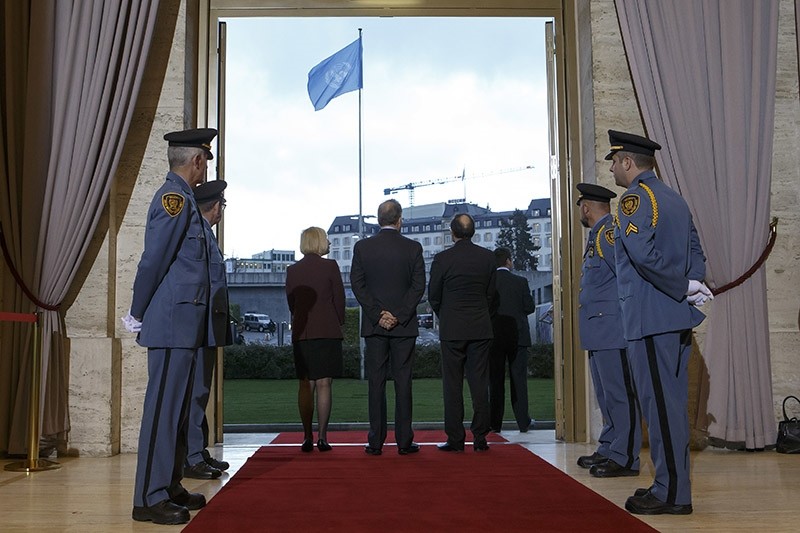 Special Adviser to the UN Secretary-General on Cyprus, Espen Barth Eide (R), Elizabeth Spehar, (L), deputy to Eide, and Michael Moeller (C), Director General of the UN Office at Geneva, stand at the entrance prior to a new round of Cyprus peace talks
by Daily Sabah with AA
Jan 09, 2017 12:00 am

Turkish and Greek Cypriot leaders gathered at the U.N. in Geneva on Monday in an attempt to resolve outstanding final issues that could see the island reunified after four decades of division.

The first day of negotiations will concentrate on issues including governance, property and security according to a Turkish Cypriot official.

In remarks made before his departure for Geneva, Akıncı told reporters that the Turkish Republic of Northern Cyprus (KKTC) would continue on its own way if a solution was not reached.

Last week, Akıncı urged all parties to work with responsibility to reach a settlement.

Reunification talks will be followed by a conference on Thursday. The Turkish and Greek Cypriot leaders expected to be joined by the three other states involved in the process, guarantor countries Turkey, Greece, and the U.K.

Turkish President Recep Tayyip Erdoğan discussed the Geneva talks with U.N. Secretary-General Antonio Guterres and British Prime Minister Theresa May on Saturday. They agreed the upcoming negotiations could be an important opportunity in reaching a final settlement.

Reunification talks resumed in May 2015; both sides have repeatedly expressed optimism that a solution could be found.

The issue of territory is one of the most intractable on the agenda. Although both sides were believed to be close to agreement on the amount of territory to be run by the Turkish Cypriot government, there are still disputes over which administration will run certain towns and villages.

Any agreement will mean redrawing existing boundaries and potentially moving thousands of residents from their homes, 42 years after many were displaced when the island was first divided.

The Turkish Cypriot side wants to keep 29.2 percent of the island's territory.

Greek Prime Minister Alexis Tsipras said that he is ready to attend Cyprus talks at the top level.

According to the statement of the country's prime ministerial office, it was said that Tsipras continues to work in order to receive successful result from the talks, and if the Turkish side has the same prospects, he is ready to attend the guarantor states' meeting at the 'top level' which will be held on Jan. 12.

While Greece and Greek Cypriot administration wants Turkish President Recep Tayyip Erdoğan to attend the meeting, it is said that they do not have information on whether he will.

On the other hand, Greek Foreign Minister Nikos Kotzias said that not even a close result was obtained in his meeting with Turkish Foreign Minister Mevlüt Çavuşoğlu at the United Nations headquarters in New York.

Greek side insists on abrogation of a guarantor system and the withdrawal of Turkish troops from the island.