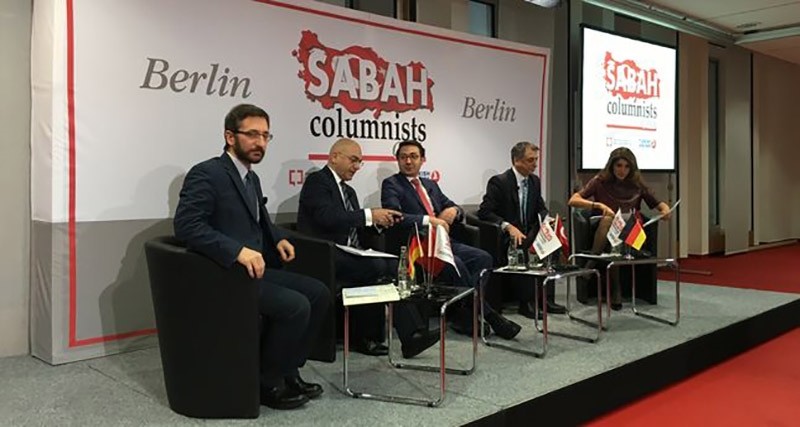 At a time of tensions over Europe's defense of terrorism-linked people from Turkey, a group of Turkish journalists were in Berlin to talk about how Germany should change its view of Turkey, especially after the July 15 coup attempt. The Sabah Columnists Club, consisting of journalists from the titular publication and its sister newspaper Daily Sabah, met their German counterparts in Berlin on Monday and traded views on European-Turkish relations.

Since the foiled putsch attempt and the start of heightened counterterror operations last year, Turkey has complained about the lack of support from Europe in its lone fight against terrorist organizations ranging from the Gülenist Terror Group (FETÖ), blamed for the coup attempt, to the PKK, whose supporters are harbored by a number of European countries.

Serdar Karagöz, the editor-in-chief of Daily Sabah, and Ozan Ceyhun, a former member of the European Parliament and Daily Sabah columnist, along with Professor Fahrettin Altun, Mahmut Övür and Şelale Kadak, columnists at Turkish Sabah newspaper, represented the Sabah Columnists Club in the German capital.

The event titled "Germany's role in the EU-Turkey relationship" took place on Monday afternoon at the Federal Press Conference Building with representatives from the media, political circles, academia and nongovernmental organizations among the invitees. Germany, along with France, has the ultimate say in Turkish-EU affairs, which have deteriorated in the past year as Turkey stepped up its anti-terror fight, to the chagrin of some EU countries. These countries are siding with supporters of the terrorist groups for what they call "human rights violations" in the anti-terror campaign. Turkey, in its decades-long venture to secure entry to the European Union, had fulfilled membership criteria thanks to a series of reforms in the past decade, only to be hit by more obstacles with the EU's criticism of the anti-terror fight, despite Europe's designation of the PKK and other groups as terrorists.

Wolf-Ruthart Born, Germany's former ambassador to Turkey, journalists from ZDF TV, Der Spiegel, Der Tagesspiegel, Die Zeit, Funke Medien, Focus and Wachsmuthmedia were among the guests at the panel. Mehmet Akarca, head of the state-run Directorate General of Press and Information (BYEGM) made a keynote speech at the panel while Karagöz moderated the event.

In his opening speech, Akarca highlighted that Turkey was currently facing multiple threats and issues. "Turkey is fighting against the PKK, Daesh and FETÖ terrorist groups and doing this in the name of humanity. We also have more than 3 million refugees," he said. He added that Turkey had a long history of coups that did not allow "breathing room" for the country to achieve development goals. He said it was "incredible" that the latest coup attempt on July 15 was viewed as "staged" in Germany. He likened it to conspiracy theories that 9/11 attacks in the United States were plotted by the CIA and invited "anyone who does not believe it" to visit Turkey to see the impact of the coup attempt.

Akarca also hit out at Europe's tolerance for terror suspects from Turkey, such as Fehriye Erdal, who was released by Belgian courts though she was implicated in the 1990s for the assassination of a businessman in Turkey in the name of a terrorist group.

Moderator Karagöz stressed that Turkey's two neighboring countries, Iraq and Syria, were "failed states" and that the region was suffering under severe conditions, adding that Turkey was also challenged by the PKK terrorist group and the "unprecedented infiltration and threat" of the Gülenist Terror Group (FETÖ). "Turkey should be a case study in the political sciences field for its ability to cope with terror threats and its struggle against them," he said. On Turkish-German relations, Karagöz said ties have been friendly in the past in terms of Turkish citizens living in Germany, who even viewed the German national football squad as "their own team." "However," he added, "in the 2000s, this started to change, amid rising racism and an Islamophobic approach to the community."

Karagöz said Turkey was concerned by unfair populist discourse against Turkey in Germany while the latter was exerting efforts to curb refugee flow into Germany "so that Germans will not be bothered," adding that Turkey was housing 3 million refugees and preventing them from traveling to Europe. Professor Altun, who also serves as a member of the Foundation for Political, Economic and Social Research (SETA), spoke about the new parameters of Turkish foreign policy. He outlined that Turkey has been looking for a new type of foreign policy since 2002, and that many changes have been made in recent years, geared towards a more realistic strategy.

"The most important new parameter is national security," Altun said, adding that new legislation regarding this parameter had been passed. He stated that Turkey was looking to end its dependence on other countries in foreign policy and has been targeted in a low-key war since 2013, pointing to attempts to topple the government, which has led to inevitable changes in policy.

Former member of the European Parliament, Ozan Ceyhun, pointed to the growing populism in Germany and underlined that the Alternative for Germany (AfD), with its anti- Muslim, foreigner and refugee policy, had become a major problem. Ceyhun stated his concerns about what would happen if the AfD was the third largest party in German parliament. "The xenophobia in Germany is very disturbing to us - mosques, Turkish associations and refugees are permanently under attack," he said, mentioning that these problems had not been so extreme two years ago.

Ceyhun said the true problem between Turkey and Germany is the failure to understand each other. "Some German journalists ask me why Turks in Germany support Recep Tayyip Erdoğan and I ask why those same Turks who voted for left-wing parties in Germany supported Erdoğan," he said. Ceyhun said Turks living in Germany were "certainly not pleased by tensions between Germany and Turkey."

Long-time journalist and columnist at Sabah newspaper, Mahmut Övür, spoke about the fight against terrorism. "We still advocate Turkey's EU membership, but some prejudices have to be broken," said Övür, highlighting that on July 16, one day after the FETÖ coup attempt, 51 German newspapers published the same title and news about Turkey and President Erdoğan: "The coup was staged."

Mahmut Övür added that each country had its own plans for terrorist organizations and that the fight against terror would not end as long as these groups were supplied with weapons. He underlined that Kurds could express all of their opinions, but through politics, not with weapons.

Economy columnist Şelale Kadak, explained that both the German and the Turkish economies were growing and had to help each other as before.

"Germany is the largest economic partner of Turkey, while Turkey is also one of the most important for Germany. There are around 6,000 German companies in Turkey, which are growing in double-digit figures. The 160,000 Turkish companies in Germany should also not be forgotten," said Kadak.

Kadak underlined that the economic relations of the two countries were at a very high level, despite many attacks, crises and Turkey's current difficulties.

The event organized by the Sabah Columnists Club is the latest in a series of panels across the world organized by the Turkish newspaper that provides a platform against a campaign of disinformation in the West in the wake of the coup attempt. The columnists, accompanied by foreign lawmakers and experts, held panels at the British Parliament in November, in Washington in December and most recently in Brussels in December.