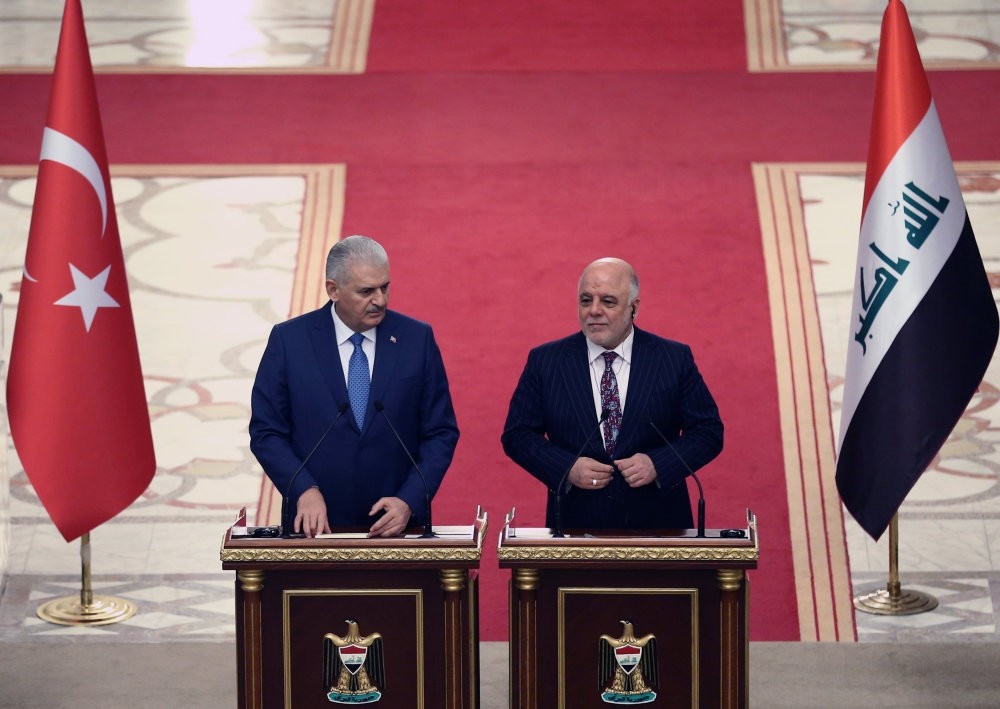 As part of Turkey's new foreign policy approach, which aims to make more friends and less enemies, Ankara has opened a new page for dialogue with Baghdad, aiming to increase cooperation against the PKK, Daesh terror

As part of Turkey's new approach to foreign policy, Ankara has opened a new page in bilateral relations with Baghdad after Prime Minister Binali Yıldırım's visit to the Iraqi capital over the weekend, a move that is expected to enhance and strengthen the counterterror measures taken by Turkey against the PKK and Daesh terror groups.

Ankara argues that the presence of troops in Bashiqa camp, who are there to train the peshmerga and other local forces, is out of necessity. In addition, Yıldırım also said as a result of training at Bashiqa camp, Daesh has taken major hits in the region. Moreover, the PKK's presence in the Sinjar region was another issue discussed with Baghdad. Turkey argues that the PKK terror organization is attempting to establish a new headquarters in the Sinjar region, in addition to the Qandil Mountains in northern Iraq.

Yıldırım said also on Sunday that the two parties have agreed to make the necessary efforts in coordination with peshmerga and Iraqi troops to clear Sinjar of terrorist elements, referring to the PKK presence in the area. "For us, terror is the same no matter where it comes from. Therefore, Sinjar poses a primary threat for Turkey and we thank the dear prime minister's sensitivity to ignoring this threat. We are ready to do the necessary cooperation in this issue too," Yıldırım added.

Meanwhile, President Recep Tayyip Erdoğan also affirmed yesterday during a speech addressing Turkish diplomats gathered in Ankara for an annual ambassadors conference that Turkey's joint efforts and cooperation with Iraq against the PKK and Daesh terror groups will continue. "We cannot imprison our foreign policy to narrow ideological frameworks. We have to continue our efforts through a diplomacy that aims for strategic activity," President Erdoğan said.

Deputy Prime Minister Nurettin Canikli also commented on the presence of Turkish troops in Bashiqa camp, saying Turkey is acting within international law to protect its national security against terror threats coming from a neighboring country. "This is why we are there, if the threat is eliminated, there will be no necessity for us to remain there," he added. In addition, Yıldırım paid a visit to the Kurdistan Regional Government (KRG), where he met with President Masoud Barzani and Prime Minister Nechirvan Barzani.

During his meetings with the President Barzani, Yıldırım also underlined that the PKK has been carrying out attacks against Turkey from Iraqi soil, and that they will do whatever is necessary to end this situation. Although Ankara's relations with the KRG have been strong, it has had disputes with the Iraqi central government, on several issues such as the Mosul operation and Baghdad's position, influenced by Iran, on the Syrian crisis.

While the KRG and Iraq's central government along with international coalition forces began an operation in Mosul in order to drive Daesh terrorists out of the city last year in October, Turkey launched Operation Euphrates Shield in Aug. 24, 2016, with the Free Syrian Army (FSA) in northern Syria to clear its borders from Daesh. Both operations are still continuing.

Nevertheless, Turkey's wave of normalizing relations with which countries it had disputes, such as Israel and Russia, as well as the recent toning down of discourse on the Syrian crisis, has been taken on a level with reconciliation attempts with Iraqi central government.

"Yıldırım's visit to Baghdad is of particular significance for regional equations and balances. The recent changes in foreign policy, softening the rhetoric and discourse on regional issues, bettering ties with Israel and Russia, have been influential in Turkey's attempt to increase friends and lessen enemies strategy," Bilgay Duman, an expert from the Middle East Strategies Research Center (ORSAM) said.

Duman underscored Turkey's attempts to establish a ceasefire in Syria, in cooperation with Russia and Iran, has been particularly influential on Ankara's approach to Baghdad.

"During the visit to Baghdad, Yıldırım was able to better explain Turkey's position toward regional issues, particularly when it comes to Turkey's simultaneous fight against the PKK, Daesh, and FETÖ [Gülenist Terror Group] terror groups," Duman said and added that Ankara, in a way, affirmed to Baghdad that Iraq's territorial integrity is important for Turkey and that these terror groups are also threats to Iraq as a country, and its territorial integrity.

"Iraq, due to its limited military capacity, will also need Turkey in fight against Daesh in the long run. In addition, during the post-conflict construction of Iraq, particularly of Mosul, Turkey-Iraq cooperation will be of significant importance," Duman also highlighted.

During the prime minister's visit, the fight against FETÖ was also discussed with Baghdad and Irbil, where the Yıldırım expressed gratitude to KRG government for their stance against FETÖ.

Meanwhile, the recent diplomatic rapprochement between Ankara and Baghdad is expected to enhance the economic cooperation and trade, as Iraq is one of the crucial markets for Turkey's exports. Although the bilateral economic relations were at a peak level in the years between 2012 and 2014, which reached a trade volume of more than 1 billion dollars, a significant decline has been witnessed in recent years. As such, the political rapprochement between the two countries is expected to boost trade relations as well.
RELATED TOPICS