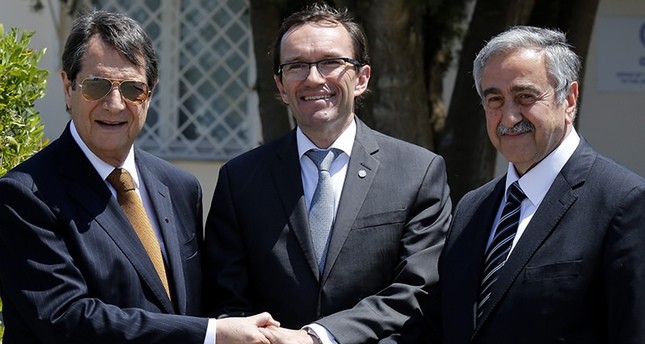 During the talks, both the Turkish and Greek Cypriot parties detailed their proposals regarding territorial boundaries in the long-divided island. The proposals have been taken into the official steel safe of the United Nations.

The UN envoy on Cyprus said earlier on the same day that the Cyprus reunification deal "is on track," ahead of Thursday's summit over the disputed island in Geneva.

Speaking at a press conference in Geneva, UN Secretary-General's Special Adviser on Cyprus Espen Barth Eide said: "We are on track. We have dealt some of the most difficult issues...We have solved many of them...There is still work to do.

"There is much work to do...We are roughly where we want to be at this stage."

He said that maps had been exchanged between the two sides. "Never before, have we [had an] exchange of maps created by Cypriot delegations themselves," Eide said.

Regarding the talks in Geneva on Thursday, he said the Cyprus summit would be at foreign ministerial, not presidential level.

"What's happening tomorrow is historic. Whatever the outcome [of the event is] is historic. Because, it is the first time in this process that guarantor powers will actually meet with Cypriots to discuss very difficult issues," he said.

"We do not of course believe that it will be over tomorrow," he said.

A British government spokeswoman told Anadolu Agency Wednesday it wanted to do whatever it could to support ongoing Cyprus peace talks in Switzerland.

"We welcome the progress made in the negotiations in recent months. We think there has been courageous leadership from the leaders of the communities involved in this.

"Resolving this long-running dispute and bringing lasting peace to Cyprus would bring benefit not just to people in Cyprus but also to the region," the spokeswoman said.

Three days of high-level talks over the divided island's future will be followed by an international conference on Thursday. The Turkish and Greek Cypriot leaders will be joined by the three other states involved in the process - the guarantor countries Turkey, Greece, and the U.K.

Turkish and Greek Cypriot leaders gathered at the UN in Geneva on Monday morning in an attempt to resolve outstanding final issues that could see the island reunified after four decades of division.

In remarks made before his departure for Geneva, Akıncı told reporters the Turkish Republic of Northern Cyprus would continue on its own way if a solution was not reached.

President Recep Tayyip Erdoğan discussed the Geneva talks with UN Secretary-General Antonio Guterres and British Prime Minister Theresa May on Saturday. They agreed the upcoming negotiations could be an important opportunity in reaching a final settlement.

Reunification talks resumed in May 2015. Both sides have repeatedly expressed optimism that a solution could be found.