Is Syrian intelligence behind Daesh attacks in Turkey? 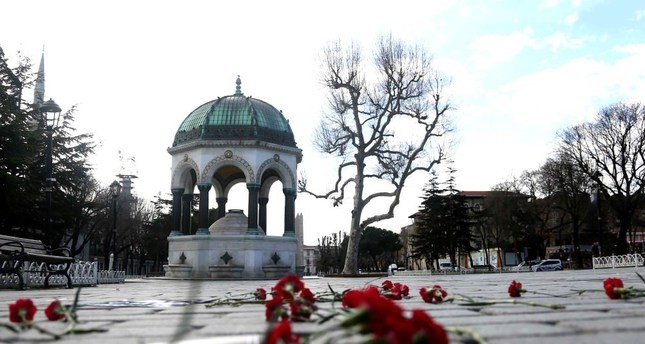 Carnations are left at the site of January 12, 2016 suicide attacks by Daesh in the historic Sultanahmet Square in Istanbul
by Ragıp Soylu
Jan 12, 2017 12:00 am

Almost a year ago a suicide bomber detonated himself in Istanbul's main touristic site, the Sultanahmet Square, killing a dozen people and injuring many. Turkish officials initially treated the assailant as a Daesh militant, since he was a 28-year-old Syrian— Nabil Fadli — who entered the country a week prior the blast, registering himself as a refugee.

A police investigation later found some surprising links between the attack and Al-Mukhabarat, the Assad regime's powerful intelligence agency, raising suspicions among foreign policy experts whether Ankara was trying to blame Damascus due to its long-standing hatred against the Syrian butcher.

Others were more sympathetic to the findings by Turkish officials. Considering that it was Assad regime who had extensive oil dealings with Daesh, in return of much-needed gas that was produced in the Tuweinan facility, which is located roughly 120 km southwest of Daesh's de facto capital of Raqqa, the largest of its kind in the country. The gas was pumped to Assad-controlled areas with the help of regime-paid engineers and Russian experts. Other reports suggested that the trade between Assad and Daesh-controlled areas was officially running without a problem as Syrian operators were providing cell phone service for Daesh territories.

The U.S. officials, on the other hand, have repeatedly asserted that Assad and Daesh were in a symbiotic relationship, one's victory was also bolstering the other.

But the most revealing confession came last week when a Syrian MP made an appearance on a pro-regime TV channel and said that the Assad's regime has infiltrated Daesh and was fully aware of the dealings behind the terrorist attacks taking place in Turkey.

"The Syrian security establishment and the Syrian intelligence services have infiltrated these networks [Daesh and other militant groups in Syria]. They have penetrated them and taken control of key structures within," said Secretary of the Syrian Parliament Khaled Abboud, in an interview on Syrian state TV channel last week, according to the translation provided by the Middle East Eye.

He said that all the fighting groups, including extremist ones such as Daesh, were in the outskirts of Damascus, then he asked, "Why have there been no bombings in Damascus? But there have been attacks on Turkish cities [instead]?"

The answer may partly lie in the Sultanahmet bombing. Sabah daily, our sister Turkish publication, reported last January that the suicide bomber Nabil Fadli had several phone calls with an individual who has connections with the Syrian Consulate in Istanbul. Police sources suggested that this unnamed suspect was a Syrian intelligence operative who was also actively engaging with refugees, allegedly canalizing them in the arms of Daesh. Sabah also claimed that Nabil Fadli was working for Al-Mukhabarat before joining the ranks of the terror group. A second news story suggested even that Fadli had been collecting intelligence for the regime when he was a fighter of Ahrar al-Sham, leading the conclusion that he was a double agent. Authorities, based on the phone records that they collected, were looking for the perpetrator of the attack, code named Dr. Sinan, another suspected Syrian intel officer.

Mukhabarat has a long history of infiltrating extremist organizations, in times support them and, later to use them against the Assad regime's enemies. A classified U.S. diplomatic correspondence released by the Wikileaks indicated that, Ali Mamlouk, a former Director of Syrian General Intelligence (GID), told American diplomats in 2010 that the Syrian intel was successfully penetrating terrorist groups such as Al-Qaeda, "In principle, we don't attack or kill them immediately. Instead, we embed ourselves in them and only at the opportune moment do we move." Mamlouk, who is now a special adviser for Syrian regime leader Bashar Assad, was among the architects of funneling foreign fighters into Iraq, in order to destabilize the country and botch American efforts after the invasion.

Commenting on Syrian MP's claims, Hassan Hassan, a Washington-based Syrian expert and co-author of a popular and much-praised book on Daesh, said that there was certainly a truth to the point that the regime has infiltrated all groups in Syria, including Daesh. "I think he was trying to make a point or deliver a message, that the regime is capable of ending these attacks," he said.

Previous investigations by credible sources and the interviews with former Assad regime officials confirm what Hassan asserts, Al-Mukhabarat has an ability to steer or even end Daesh terrorist attacks.

Abdul Halim Khaddam, the former Vice President and Foreign Minister of Syria, told a magazine last April that Assad in 2011 promised the world that they would soon suffer what Syria has suffered. "And in October 2011 the Mufti Hassoun, who is the religious authority closest to the power in Damascus, made an entire statement to announce that 'all the sons and daughters of Syria will set out to become martyrdom-seekers in Europe and on Palestinian soil. I say to all of Europe and to the U.S.: We will prepare martyrdom-seekers who are already among you.' "

Khaddam notes that at some point, practically half the Syrian population worked for Secret Police one way or another. There are currently more than 3 million Syrian refugees in Turkey, and Turkish intelligence is having a hard time to conduct a security review on these people, because in most of the cases they don't have identification and Turkey has no access to past records.

Tablet Magazine, American political magazine that interviewed Khaddam, reported that a French Daesh fighter with links to Syrian Intelligence was Boubakeur al-Hakim, a Franco-Tunisian born in Paris in 1983, who worked with the Syrian Mukhabarat between 2002 and 2005 before traveling to Tunisia, where he committed several political murders and planned the Bardo attack.

Nabeel Dendal, former director of political intelligence in Latakia, the Assad family's ancestral home, told The Daily Beast that "half the commanders in Daesh are working with the regime today", other defectors from the security sector say it's about one third. "According to Naser, the former head of political party affairs at the Syrian intelligence station in Ra's al Ein, in northern Syria, most of the top commanders of Daesh in Raqqa are linked with Syrian intelligence" The Beast reported.

A spokesman in the U.S. State Department said she can't confirm whether the claims that the Syrian intelligence indeed penetrated the Daesh network, "We do not have any information about these claims and cannot confirm the veracity of the statement by the Secretary of the Syrian Parliament", she said.

Finally, a senior Turkish intelligence officer told Daily Sabah that he can't personally confirm whether Syrian MP's claim represents the truth, "but it is highly possible that what he said was correct.

In 2015, Turkish President Tayyip Erdoğan made several remarks indicating that there was joint operations run by Daesh and the Syrian intelligence, which seemed a conspiracy ridden idea for many. Indications and this confession by a regime agent on TV suggest that a conspiracy may have been brought to life by Syria's Al-Mukhabarat.