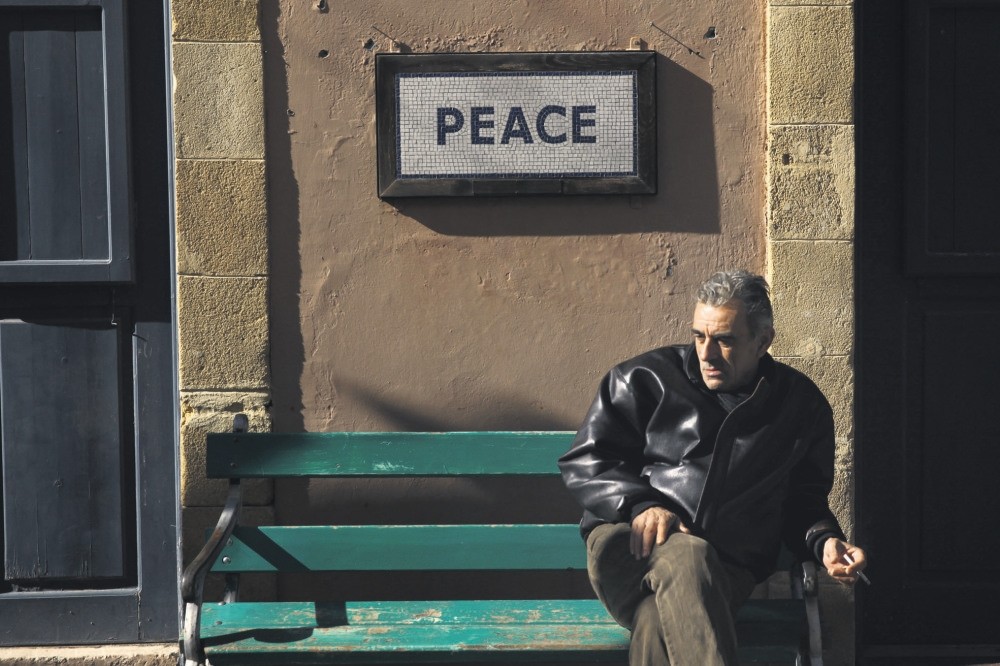 A man sits on a bench under a peace sign near the UN-controlled buffer zone in Nicosia, Cyprus January 9, 2017. (Reuters Photo)
by Daily Sabah with AA Jan 14, 2017 12:00 am
President Recep Tayyip Erdoğan asserted on Friday that Turkish soldiers will remain present in the Turkish Republic of Northern Cyprus (KKTC) no matter what. Speaking to reporters after Friday prayer, Erdoğan said that the KKTC has been putting in sincere efforts, while the Greek Cyprus side has been making new and different requests. Rebuffing talks that Turkish soldiers could leave the Turkish Cyprus side, Erdoğan said that it would never take place. Greek Cypriot President Nicos Anastasiades said Friday that Turkish troops must leave the island. "Our position remains... that we must agree on the withdrawal of the Turkish army," he told reporters in Geneva.

The president asserted that a peaceful and fair solution to the terms of presidency would be one term for the Turkish Cyprus side and two for the Greek Cyprus side.

As the first round of the Cyprus Reunification talks in Geneva came to an end on Thursday, the Turkish and Greek Cypriot sides decided to continue discussions as both parties agreed a permanent solution to the issue was required.

Meanwhile, Turkey's Foreign Minister Mevlüt Çavuşoğlu on Thursday said the Cyprus reunification talks would continue with technical discussions with a working group at the deputy level from Jan. 18, followed by ministers and then a prime ministerial level meeting.

He, however, confirmed that "there was no consensus among sides on when to hold the next Cyprus conference at the ministerial level."

The Conference on Cyprus convened Thursday under the auspices of the Secretary-General of the U.N., with the participation of the presidents of Greek Cyprus and the Turkish Republic of Northern Cyprus (KKTC), as well as the foreign ministers of Greece, Turkey and the U.K., the three guarantor powers and in the presence of the EU as an observer.

"This is the first time that brought all together to discuss the chapter of security and guarantees, the sixth and last chapter of the negotiations," the U.N. said in a statement following the conference.

"The participants recognized that this is the time to bring the negotiations to a successful conclusion. This is a historic opportunity that should not be missed. The participants therefore committed to supporting the process towards a comprehensive settlement in Cyprus. The common objectives outlined above will require concerted efforts by all concerned over the course of the next days," the U.N. said.

Foreign Minister Çavuşoğlu said, "We wanted the working group at the level of deputies to meet as soon as possible but the Greek side requested more time."

"We do not want to have an open-ended process," he added, "We clearly pointed out the position on the issues of security and guarantees. Our position fits with the position of Turkish Cypriots," Çavuşoğlu said.

"We believe that a solution on Cyprus issue will create new cooperation and trust in the East Mediterranean. It will be a win-win situation for everyone," he said.

"It is a fact that Turkey's guarantor power is highly important for the Turkish Cypriots," he stressed, adding that the presence of Turkish army in the island will be continued and it is something the Turkish Cypriot community wants.

Turkish Deputy Prime Minister Tuğrul Türkeş contended that Greek Prime Minister Alexis Tsipras had put forward a condition that all guarantees be lifted, which is why "the level of attendance remained low."

U.N. envoy on Cyprus, Espen Barth Eide, who talked to the media after the high-level meetings, described the preceding three days of talks by the two Cypriot sides as "on track."

Turkish and Greek Cypriots exchanged maps on proposed territorial boundaries Wednesday and the documents were sealed in a U.N. vault.

Reunification talks resumed last May with both sides repeatedly expressing optimism over a possible solution.

Once a final agreement is reached, it would be put up for a referendum to be voted on by the two Cypriot communities.

Akıncı has said a reunification vote could be held in mid-2017, if an agreement is indeed reached in Geneva.
RELATED TOPICS