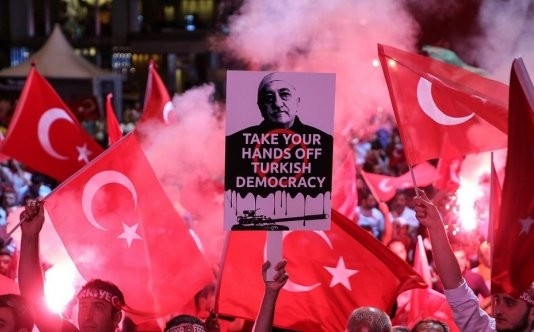 Prime Minister Binali Yıldırım said yesterday Turkey has three expectations from the new U.S. administration, which are the extradition of the leader of the Gülenist Terror Group (FETÖ), Fetullah Gülen, ceasing arms support to the PKK's Syrian offshoot the Democratic Union Party (PYD) and its armed wing the People's Protection Units (YPG) and repairing its negative image in the eyes of the Turkish public that came after the failed July 15 coup attempt.

Speaking to media representatives in the Parliament, Yıldırım said that Turkey is hopeful for a shift in the U.S.'s approach toward the Middle East.

"They [U.S.] are saying that they will work closer with Turkey for the future plans because their sphere of influence has been degrading in the region. They are good things. My adviser, İhsan Durdu, went to the U.S. because he was invited to the inauguration."

The prime minister underscored three expectations from the U.S. "First, it should extradite the head [Fetullah Gülen] of the Gülenist Terror Group."

Turkey officially submitted evidence to the U.S. back in October 2016 regarding Gülen's network that formed a quasi-state within the Turkish state and attempted to topple the government ultimately with the intent to take over the state via a vicious coup. Justice Minister Bekir Bozdağ traveled to the U.S. and met with his U.S. counterpart Attorney General Loretta Lynch on Oct. 26 in efforts to expedite Gülen's extradition. However, despite President Recep Tayyip Erdoğan and Justice Minister Bozdağ's determined efforts, the Obama administration has chosen to remain idle and has taken no action against the U.S.-based terror leader. Under normal procedures, Gülen should have already been arrested since Turkish authorities issued an official request for his extradition on Sept. 13 under a 1979 treaty between Turkey and the U.S. Ankara now expects the Trump administration to work closely with Turkey toward Gülen's detention and his ultimate extradition following a tiff with the Obama administration over several issues, such as cracking down on the presence of FETÖ in the U.S.

"Secondly, the U.S. should stop arming and cooperating with the PYD and the YPG. A terror group cannot be eliminated by using another terror group. The U.S. has been our NATO partner for many years. If there is a fight against terrorism, it will be carried out with Turkey instead bad groups," said Yıldırım.

Washington continues to read from a different page to Ankara concerning the PYD, with the former defending its policy by saying the PYD fights Daesh on the ground in Syria. Even though the U.S. says the PYD is the only effective force in the region, Ankara reiterates that there cannot be any distinction between good and bad terrorist organizations. Regarding the issue, at a senate panel in the U.S. congress in April last year, Secretary of Defense Ashton Carter made a puzzling statement about the PYD after asked by Sen. Lindsey Graham whether the PYD and the YPG are aligned with the PKK terrorist organization. Carter admitted the link between the PKK and the PYD and acknowledged that the PKK is a U.S. designated terrorist group, however, he refused to call the PYD a terrorist organization.

"Thirdly, Turkish people have a very negative perception of the U.S. that has deepened since the July 15 coup attempt. We are expecting concrete steps from the new administration to repair this situation," said the prime minister.

Despite the Turkish people's outrage toward Fetullah Gülen, the mastermind behind the coup attempt, Washington insists on providing shelter for him, despite evidence sent to the U.S. administration regarding his illegal activities. According to a survey conducted by pollster Andy-Ar in late July nearly two thirds of Turks believe U.S.-based Fetullah Gülen was behind the failed coup attempt in Turkey on July 15.