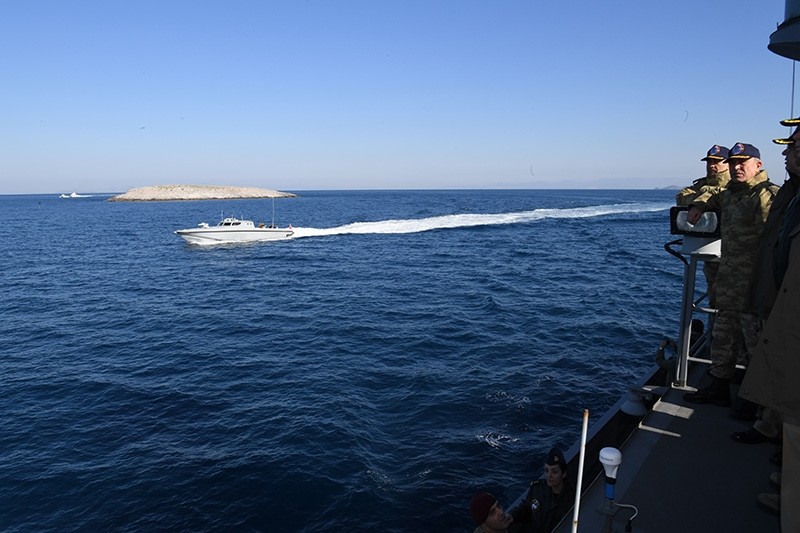 Turkish Chief of Staff Gen. Hulusi Akar carries out an inspection on TCG Meltem torpedo boat, while a small Greek patrol boat passing next to the vessel. One of the Kardak islets is seen in the background. (Photo: Turkish Armed Forces)
by daily sabah
Jan 29, 2017 12:00 am

Turkish Military Chief of Staff General Hulusi Akar paid a surprise visit to Kardak islets in the Aegean Sea on Sunday on the 21st anniversary of the military muscle show incident that brought the two countries on the brink of armed conflict, while relations are tense due to Greece's refusal to extradite eight FETÖ-affiliated pro-coup soldiers to Turkey.

Following the visit, Akar and the accompanying commanders cruised near the Kardak islets - known as Imia in Greek - which are claimed by both countries and had been a source of tension again between Turkey and Greece since late 2016. The Kardak Islets are a pair of two small uninhabited islets in the Aegean Sea, situated between the Greek island chain of the Dodecanese and the southwestern mainland coast of Turkey.

Immediately after Akar's visit, Turkish media reports claimed that a Greek military vessel tried to prevent the ship carrying Akar from getting close to the islets. Turkish Armed Forces (TSK) denied these reports in a statement, showing a photo of Akar on the vessel near one of the islets while a Greek patrol boat cruising next to it. The TSK also released a video clip from Akar's visit.

The relations between Turkey and Greece were recently strained by a top Greek court's refusal on Thursday to extradite eight pro-coup soldiers who fled to Greece after the July 15 coup attempt, which killed 248 people and injured over 2,200 others, while leaving the Turkish Parliament bombed. Turkish officials harshly criticized the decision for being highly political and ignoring bilateral and international treaties, stating that Greece once again disappointed Turkey by supporting terrorism.

General Akar's visit coincided with the anniversary of the deaths of three Greek soldiers who died when their helicopter crashed during a reconnaissance mission on Jan. 1996 at the height of military crisis between Turkey and Greece triggered when a Turkish vessel shipwrecked on the islets on Dec. 25, 1995.

Greece claimed that the accident took place on its territorial waters, which was denied by Turkey, who claimed that the aforementioned islets belong to Turkey. The Greek military sent a soldier to plant the Greek flag on an islet in the east, resulting in the deployment of troops from both countries around the islets.

The two countries also have contentious relations on issues as territorial waters in the Aegean Sea, the Cyprus question and the status of Turks in Western Thrace and Greeks in Istanbul, along with the status of Phanar Greek Patriarchate.