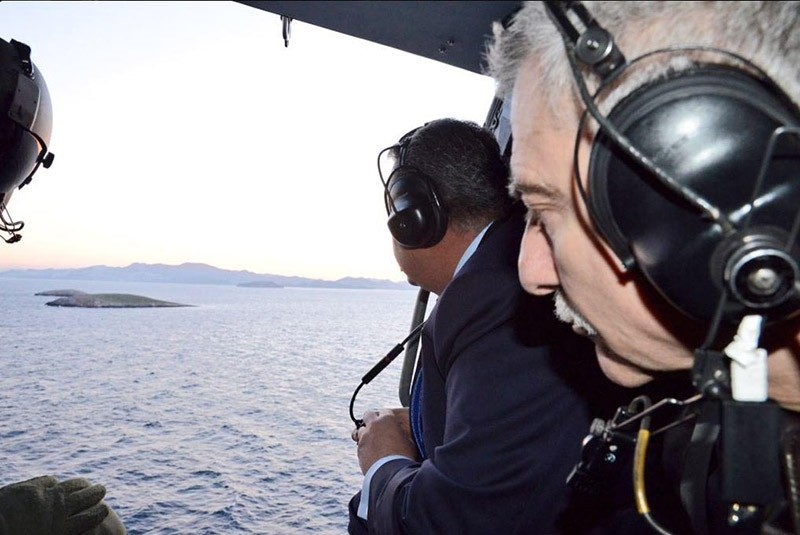 Amid the recent diplomatic spat between Turkey and Greece over a Greek top court's refusal to extradite pro-coup soldiers, Greek Defense Minister Panos Kammenos flew over the Aegean's Kardak islets on Wednesday, throwing wreaths to commemorate soldiers who were killed in the military muscle show during the tensions over islets 21 years ago.

Departing from the nearby Leros Island, Kammenos and accompanying commanders flew over the islets. Kammenos later threw a wreath to commemorate three Greek soldiers, Christodoulos Karathanasis, Panagiotis Vlahakos, and Ektoras Gialopsos, who were killed during a reconnaissance mission when their helicopter taking off from Greek frigate Navarino crashed on Jan. 31, 1996, at the height of the crisis. Several F-16 jets also flew over the islets during Kammenos' flight.

Turkish Chief of Staff Hulusi Akar, accompanied by army, navy and air force commanders, paid a surprise visit to the area and cruised near the Kardak islets on Jan. 29. He later visited Aksaz Navy Base Command located near Turkey's Aegean resort town of Marmaris.

Relations between Turkey and Greece have recently been strained by a top Greek court's refusal on Thursday to extradite eight pro-coup soldiers who fled to Greece after the July 15 coup attempt, which killed 248 people and injured over 2,200 others, and left the Turkish Parliament bombed.

Turkish officials criticized the decision harshly for being highly political and ignoring bilateral and international treaties, stating that Greece had disappointed Turkey once again by supporting terrorism, as it had done by sheltering members and activities of PKK and DHKP-C terror groups.

The two countries also have contentious relations over issues such as the Cyprus question, the status of Turks in Western Thrace and Greeks in Istanbul, and the status of the Phanar Greek Patriarchate.

However, the most problematic issue remains the control of territorial waters in the Aegean Sea. Citing bilateral and international treaties, Turkey says both countries have six-nautical-mile-wide territorial waters and airspace around their respective mainland and islands. In contrast Greece, citing international law, wants to increase its territorial waters to 12 nautical miles, which would leave practically the whole Aegean Sea under Greek control. Through a parliamentary motion in 1995, Turkey declared unilateral action by arguing that, if Greece were to extend the boundary to 12 nautical miles it would be considered a casus belli.

The Kardak islets are a pair of two small uninhabited islets, situated between the Greek island chain of the Dodecanese and the southwestern mainland coast of Turkey.

The area has been tense since late 2015 as Turkish and Greek coast guard and navy vessels frequently confront each other in the waters near Kardak, which are also known as Imia in Greek and claimed by both countries.

A military crisis between Turkey and Greece was triggered when a Turkish vessel shipwrecked on the islets on Dec. 25, 1995. Greece claimed that the accident took place on its territorial waters, which was denied by Turkey, who claimed that the aforementioned islets belong to Turkey. The Greek military sent a soldier to plant the Greek flag on an islet in the east, resulting in the deployment of troops from both countries around the islets.