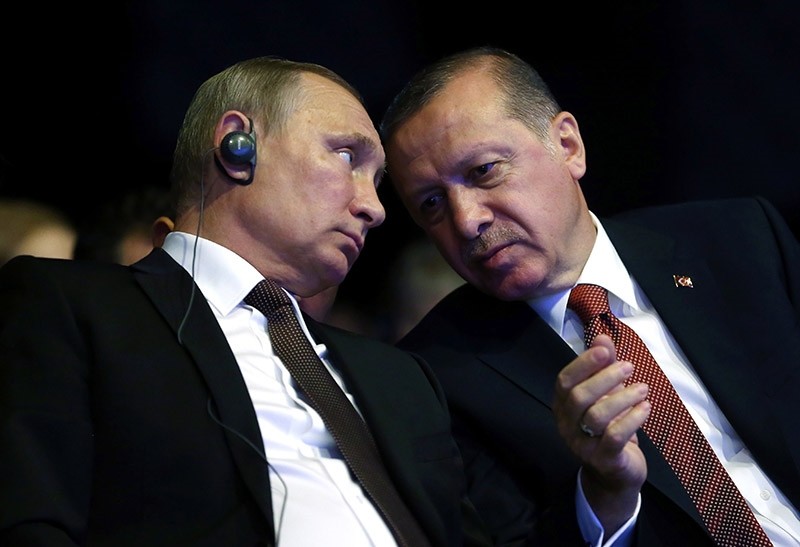 This file photo taken on Oct.10, 2016 shows President Recep Tayyip Erdou011fan talking with his Russian counterpart Vladimir Putin during the opening ceremony of the 23rd World Energy Congress in Istanbul, Turkey. (AFP Photo)
by Daily Sabah with Agencies Feb 03, 2017 12:00 am

President Recep Tayyip Erdoğan is expected to travel to Moscow to meet Russian President Vladimir Putin in the first half of March, the Interfax news agency quoted Turkey's ambassador to Russia, Hüseyin Diriöz, as saying on Friday.

Diriöz said the two leaders, who repaired relations last year after a diplomatic spat and are currently working together to broker a peace deal in Syria, would discuss how to improve relations, according to Interfax.

The planned visit would be the fourth meeting between the two leaders in the last six months, he added, and will further enhance the relations between the two countries.

The approval of a visa exemption for Turkish businessmen and politicians will also be covered during the meeting, Diriöz said.

Having suffered from the jet downing incident on Nov. 25, 2015, relations between Turkey and Russia recovered after the July 15 coup attempt. Turkey provided radar data showing the Russian planes had breached the border while Moscow insisted that the warplane did not.

In the wake of the crisis, Erdoğan and Putin exchanged harsh criticisms and ultimatums while the Kremlin directed accusations at Ankara and imposed sanctions on various Turkish trade sectors.

Since then two countries have stepped up relations in diplomacy, trade, and economic relations. In addition, Russia and Turkey have played a leading significant role in establishing a cease-fire in Syria's Aleppo and have put forward efforts to ensure a political transition is built as a permanent solution to the Syrian crisis.