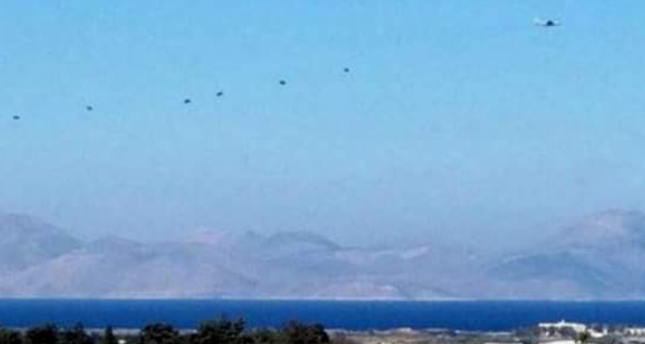 Photo obtained from social media shows Greek paratroopers landing on the Island of Kos.
by Daily Sabah with AA Feb 03, 2017 12:00 am

The Foreign Ministry warned Greece on Friday against its military activities on the Aegean island of Kos.

"According to the Paris Agreement in 1947, any kind of military activities were forbidden on the island of Kos, which was abandoned to Greece by Italy. Thus, a military drill on the island is a clear violation of international law. We call on our neighbor Greece to give up any arbitrary step contrary to international law that could create tensions."

He added that Ankara would take all legal actions to defend its political and lawful rights over the Aegean Sea.

On Thursday, some Greek media outlets reported that Greek paratroopers landed on Kos, an action that violated the Paris Peace Treaty that prohibits all military activities on the island.

Kos is part of the Dodecanese chain of islands, placed under demilitarization as part of a peace accord after World War II when Italy ceded them to Greece. The island is located some five kilometers south of the Bodrum peninsula located in Turkish mainland.

Turkish-Greek relations have been strained since a Greek court's refusal to extradite eight Turkish officers who fled in a military helicopter following the failed July 15 coup attempt.

Athens is a favorite hideaway for fugitive terrorists from Turkey and has denied extradition requests for 50 terrorists sought by Ankara in accordance with bilateral and international treaties since 2007. The number of rejected extradition requests includes 24 members of the Revolutionary People's Liberation Party-Front (DHKP-C) and one member of the PKK. Terrorists fleeing Turkey took shelter in refugee camps in Lavrion near Athens under the guise of asylum seekers, especially in the 1980s. Despite the closure of Lavrion in 2013 amid pressure from Turkey, Greece continues to be the primary destination for DHKP-C terrorists.

The Turkish army found 40 illegal refugees near the Maritsa River on the Turkish border, left by Greek authorities.

The group, consisting of Pakistani, Afghani and Syrian nationals, was brought to an immigration office after completing their paperwork.

One of the Pakistani immigrants, Osman Ali, said that they were headed to Germany where his brother lives but were caught by a Greek border patrol and then discarded on the Turkish side.

Security sources said that this kind of deportation, which is called "push back," is against international law; recently however, it has often been used by Greek authorities.

Earlier this week, Turkey said it might consider cancelling the readmission deal with Greece, which allows the latter to return illegal migrants - who traveled through Turkey - to Turkey, to be processed before they are sent back to their country of origin. The announcement came after Greece refused to extradite coup plotters to Turkey.

Turkey and Greece signed a readmission deal as a part of a migration deal between Turkey and the EU,

Illegal migrant arrivals on Greek islands have dropped significantly since the agreement came into effect, with the number dropping to around 20 people per day from 7,000 in 2015.