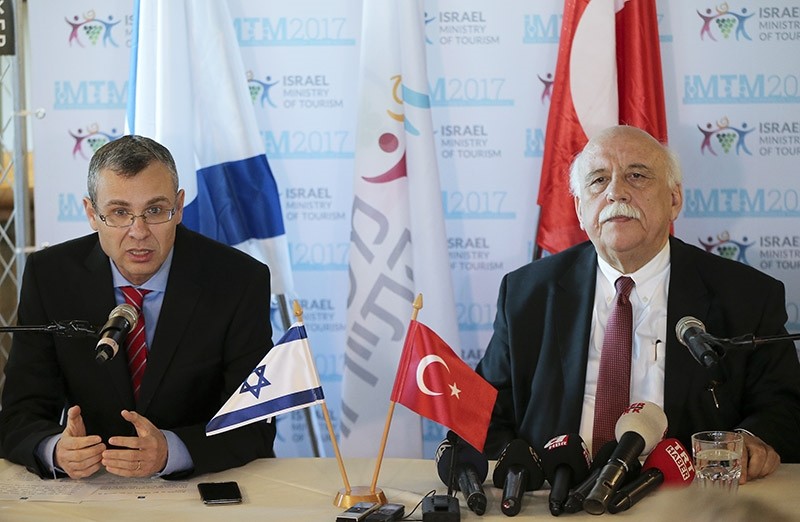 The Turkish minister met with Israeli officials during a regional tourism conference in Tel Aviv yesterday. Turkish-Israeli relations improved last year after the two sides showed their willingness to embark on a new era of cooperation in several areas.

"We discussed strengthening relations between the two countries," Avcı said at a joint press conference with his Israeli counterpart Yariv Levin. Commenting on the recent Israeli bill to legalize the settlements in Palestinian territory, Avcı said that he hopes the higher court makes the right decision. "I hope that the higher court will make a decision in line with United Nations decrees," he said.

Avcı asserted Turkey was doing all it can to achieve a peaceful solution to the Palestine-Israel conflict. "We are making concerted efforts; we are doing everything we can and we hope that our relations with Israel will contribute to establishing peace," he said.

Israel, meanwhile, has renewed its airstrike campaign against the Palestinians. Making a comment about whether the attacks could affect Turkish-Israeli relations, the Turkish minister said that both sides are experienced enough to avoid allowing relations deteriorate again. Turkey and Israel renewed ties last June following a six-year split over the attack on the Mavi Marmara humanitarian aid ship in May 2010, when Israeli commandos killed 10 Turkish activists on the Gaza-bound vessel in international waters.

President Recep Tayyip Erdoğan in late August 2016 approved a number of laws including the normalization deal with Israel, which was recently passed in the Turkish Parliament. According to the agreement, Israel paid $20 million as compensation for the lives lost during the Mavi Marmara flotilla raid and Turkey dropped cases related to the incident. Israeli soldiers were exempted from legal and criminal responsibility and individual Israeli nationals would not be held criminally or financially liable for the incident either. The deal was also approved in the Israeli cabinet. In addition, both countries appointed ambassadors as part of the normalization process.

Avcı was among the tourism ministers from 10 countries attending the International Mediterranean Tourism Market conference, which Levin described as the largest hosted by Israel. He said the Turkish government welcomes Israeli tourists in Turkey. "There were 260,000 Israelis who visited Turkey last year and I think it is possible to raise the number to 600,000, as it was before," he said, adding that there had been 30,000 Turkish visitors to Israel.

Levin, for his part, said Israel's tourism sector has been growing and that it saw the success of Turkish tourism as a model. "Israel is now seeing a new era regarding tourism with growth in the number of tourists who are coming to Israel," Levin said. "We are following in many aspects the measures that were taken in Turkey many years ago to build their tourism industry," he added.

As part of his official tour, Avcı is expected to attend the opening ceremony of a photo exhibit on Turkish-Israeli relations organized by Anadolu Agency and the Turkish Cultural Center. He will also attend the opening of an exhibit of historical photos of Jerusalem. During his two-day tour, Avcı will also travel to Palestine, where he is expected to visit Al-Aqsa Mosque and the gravesite of Palestinian statesman Yasser Arafat and also meet Palestinian Cultural Minister Ehab Bessaiso.

Last week, senior Turkish and Israeli diplomats met in Ankara for the first high-level meeting between the countries since the Mavi Marmara crisis, to discuss cooperation in energy, economy, culture and tourism as well as regional concerns.