German democracy to be tested with PM Yıldırım's visit to Germany 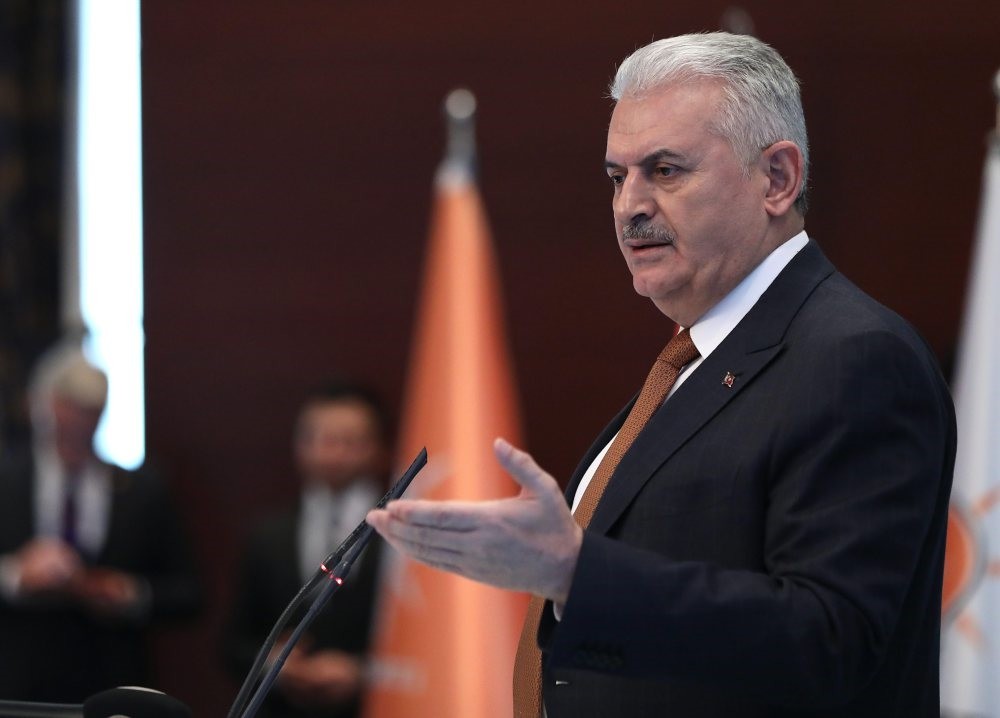 Despite these undemocratic calls to prevent the event, Prime Minister Yu0131ldu0131ru0131m will address the supporters during his visit to Germany upon invitation of the Union of European-Turkish Democrats.
by Daily Sabah Feb 17, 2017 12:00 am

Prime Minister Yıldırım will pay a visit to the German city of Oberhausen where he is due to address more than 10,000 Turkish-Germans while German politicians and the media have already begun campaigns to prevent the event

Turkish Prime Minister Binali Yıldırım will visit Germany on Feb. 17-19 to attend the Munich Security Conference and as well as to meet Turkish citizens living in the country and ask for their support in the upcoming referendum on the constitutional amendment. However, prior to his visit German media outlets already started a defamation campaign that urges local authorities to prevent the event and calls for counter-demonstration. Prime Minister Yıldırım will attend today the Munich Security Conference which is a major global forum to discuss on current and future security policies. Following the cönference Yıldırım is expected to meet with the Turkish people in Oberhausen at North Rhine-Westphalia on Saturday where he will address over 10,000 Turkish citizens at Arena Oberhausen.

The prime minister's visit to Germany comes amid efforts to get expat voters to rally behind the constitutional amendment package in the upcoming referendum, with hopes that the presidential system will contribute to Turkey's strength and stability in the international arena. However, the calls by German politicians to ban the event raise concerns about freedom of expression in the country. Germany's Bild website reported on Wednesday that Stephan Mayer, the interior politics spokesperson for the conservative Christian Democratic Union of Germany (CDU) and the Christian Social Union in Bavaria (CSU) Union parties called for the banning of the event. Likewise, Wolfgang Kubicki of the libertarian Free Democratic Party (FDP) challenged the reasons for Prime Minister Yıldırım's visit to Germany, saying that the prime minister was going to be, "On German territory to advertise for an autocratic system in Turkey."

Despite these counter-democratic aims to prevent Turkey's participation in the event, Prime Minister Yıldırım will speak at the Oberhausen Arena at the invitation of the Union of European-Turkish Democrats (UETD) since local authorities have a very limited legal capacity for prohibiting such events. Moreover, German media outlets have already started calling for demonstrations opposing the event. According to Oberhausen police, a left-wing youth organization under the motto, "Say no to the presidential system in Turkey," is organizing a counter-demonstration. Local police have reported that so far 500 people have registered to participate in the demonstration.

Even though German officials are welcome and encourage demonstration against the Turkish prime minister, Germany is not a paradise for freedom of expression all the time.On July 31 of last year, thousands of Turks living in Germany gathered in Cologne on Sunday in solidarity with their compatriots back at home, condemning the July 15 coup attempt by the Gülenist Terror Group (FETÖ). Germany's highest court had earlier decided to prevent President Recep Tayyip Erdoğan from speaking at the rally.

However, in stark contrast to the recent counter-Turkish rhetoric, on Sept. 3, 2011, German authorities allowed senior PKK commander Murat Karayılan to address a crowd at a cultural festival in the country. Germany, along with the rest of the EU and the U.S., recognizes the PKK as a terrorist organization, yet still remains one of the prime destinations for FETÖ and PKK members fleeing trials in their native Turkey where they face charges for illegal activity.

The decision by the Federal Constitutional Court, ruled on an action by Cologne police to prevent rally organizers from inviting the president to address thousands of supporters via video link at Sunday's rally, an action planned in protest of the coup attempt on July 15 in Turkey by a military junta loyal to FETÖ. Despite banning President Erdoğan from addressing the rally, one of the PKK terrorist organization's leaders, Karayılan, previously addressed PKK supporters in Germany via a video-conference call in 2011. Presidential spokesman İbrahim Kalın said that Germany's decision to block the video conference was unacceptable.

After German police searched the apartments of four Turkish imams Wednesday as part of an investigation into alleged intelligence-gathering activities, Justice Minister Bekir Bozdağ said on Thursday that allegations against the Turkish-Islamic Union for Religious Affairs (DİTİB) imams are "slander." The minister said that ''There is no doubt that unfair, unfounded and arbitrary practices and inquiries into Turkish religious officials will harm relations between the two countries."

The minister said Germany was too quick to believe the allegations raised by terror organizations and terrorists working against Turkey: "We condemn [German] raids on the homes of imams and invite the German authorities to terminate this unfair and arbitrary practice that violates human rights and the freedom of expression," Bozdag said.

Commenting on this issue, Parliament's Human Rights Commission head and parliamentary deputy Mustafa Yeneroğlu said on Thursday that police raids on the homes of four imams suspected of spying for the Turkish government in Germany were politically motivated.

Yeneroğlu said the raids on the DİTİB, were not new while noting they have increased recently: "The main purpose is to sever the DİTİB's ties with Turkey, transforming it into a fragmented and weakened association. I am gravely concerned about the future of the Turkish community there," he added.DİTİB Secretary-General Bekir Alboga also said Wednesday that the searches on the imams' apartments were not "intended for any DİTİB employees." Speaking to reporters in Cologne, Alboga said the investigation targeted, "a few individuals who have gathered intelligence by illegal means and reported it." He said they would not tolerate any unlawful acts in their institutions, adding that they would continue to cooperate on projects with stakeholders in "churches, politics, the media, and the state."

The DİTİB is an organization controlled by Ankara that manages some 900 mosques and religious communities in Germany. It's also the largest union representing Germany's Turkish community and has strongly denied any involvement in espionage, saying that a number of imams apparently misinterpreted a request by the Presidency of Religious Affairs (DİB) and sent information to Ankara.
RELATED TOPICS