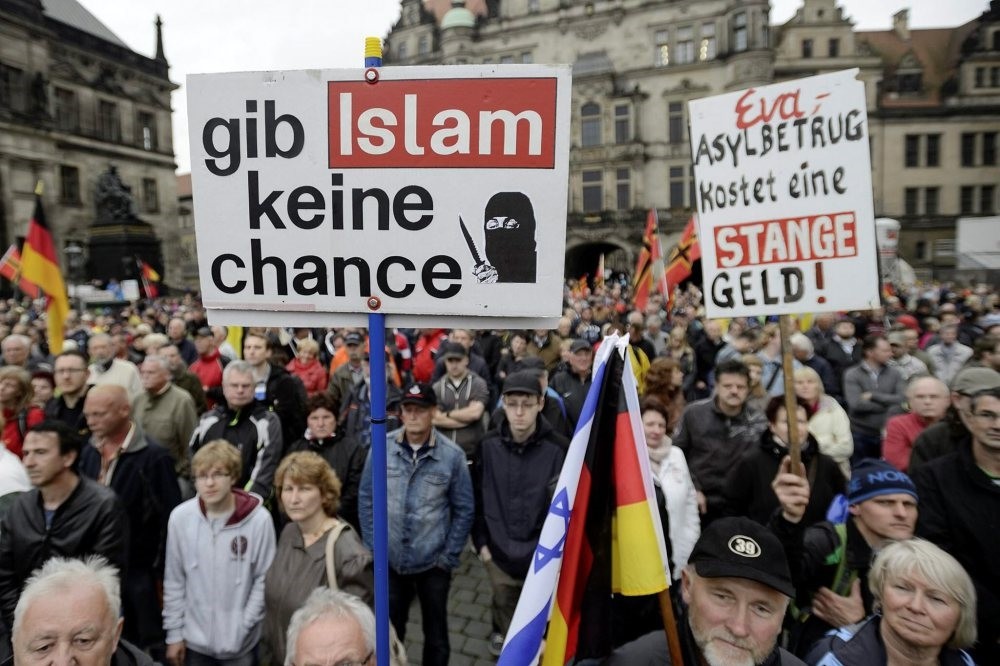 Ankara is closely following the worrying racist, xenophobic and anti-Islamic trends growing in Europe with concern, Turkey's Deputy Prime Minister Türkeş said, adding that Germany should not forget its horrid past resulting from bigotry

Turkey's Deputy Prime Minister Tuğrul Türkeş spoke an advisory meeting with local civil society groups in Munich during on Sunday to stress that "Turkey is watching the course of world events in matters of racism, xenophobia and anti-Islamism with concern," and urged Germany to keep in mind its past horrid experience with bigotry.

Experts have also commented on the escalation in racism, xenophobia and anti-Islamism throughout the world, especially in Europe, and highlighted rising bigotry with various examples of the matter. Asiye Bilgin, deputy chairwoman of the Europe-based nongovernmental organization the Union of European Turkish Democrats (UETD), told Daily Sabah that "as Muslims residing in Europe, we are following the incidents [regarding the rising anti-Islamism, xenophobia and racism] with great concern,"and added that even the center-left political parties in Germany are gradually altering their statements to be similar to the ones of right-wing parties.Like Bilgin, academic and foreign affairs specialist Enes Bayraklı drew attention to the "extreme increase in racism" in Germany, especially against refugees, as he noted that the recent attack against the Turkish-Islamic Union for Religious Affairs (DİTİB) by German police also fell under that category. As refugees and immigrants are a significant part of German society, with more than 5 million Muslims residing in the country, Deputy Prime Minister Türkeş affirmed to the representatives of the Turkish community and civil society groups in Germany that Turkey is ready to provide support to expat Turks by all means.

"Similarly to you, we [Turkey] are following the course of events on the matters of racism, xenophobia and anti-Islamism with great concern. We urge and always remind our European friends not to fall victim to this illness. We hope that the multicultural lifestyle, which was achieved at a great price, is not sacrificed for the sake of domestic politics," Türkeş added. He further called on Germany to bear in mind its negative experiences from history in this regard.

The Turkish deputy prime minister noted that nongovernmental organizations also have heavy duties regarding the issues of racism, xenophobia and anti-Islamism, saying "we must be united." Agreeing with Türkeş's remarks, prominent expert Bayraklı also said the rift in Germany's domestic politics is affecting Turkish-German relations, while drawing attention to the importance of DİTİB's role in Germany against rising radicalism. As Bayraklı stressed that the situation in Germany regarding bigotry is "very serious" he also said the previous "anti-Semitism in Germany is now taking the form of anti-Islamism. Indeed, not only in Germany, but also throughout Europe." He stressed that the ideology behind anti-Islamism is the same regardless of the form or shape it takes and noted that "Germany and all of Europe will be held responsible of the consequences of this issue."

Bilgin further stated that "the remarks on protecting multiculturalism and common sense are not receiving the attention they deserve. Just recently, Geert Wilders described Moroccans living in Netherlands as 'scum'… Thus, it is evident that racism has come from periphery to the center, not only in public discourse, but also action, with it having become a 'thing' of the elitists." She also underlined that since the refugee flux to Europe, anti-Islamism and xenophobia had moved beyond words and affect daily lives, as well as the security of the Muslim society and communities in Europe. "The report card of Europe on its anti-Islamism is highly concerning when considering that there were 91 attacks against mosques in 2016 along with burnt refugee houses and attacks against Muslim women wearing the headscarf," Bilgin added.
RELATED TOPICS