Erdoğan, Trump to meet each other by May at the latest 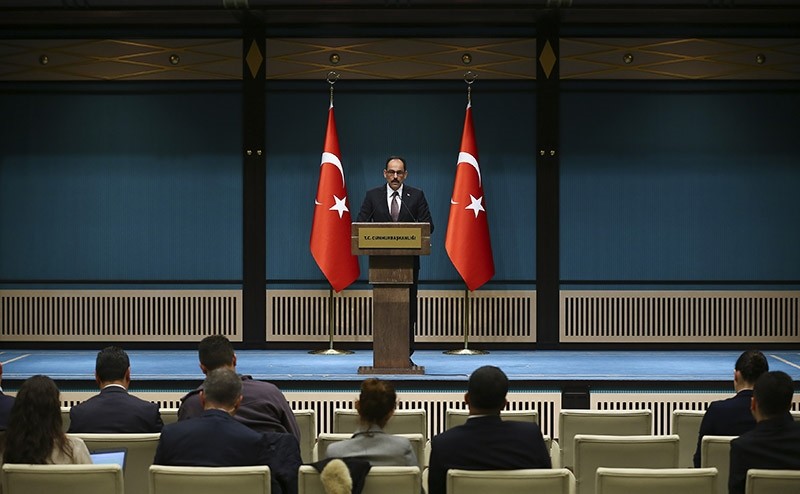 Presidential spokesman İbrahim Kalın said on Wednesday during a press conference that presidents Recep Tayyip Erdoğan and Donald Trump are due to meet by next May at the latest, when a NATO summit is scheduled to take place.

Kalın explained that Turkey is determined to continue pursuing Operation Euphrates Shield, which was launched in August 2016 to clear Turkey's border with Syria from terrorist groups such as Daesh or the PYD-YPG, and reiterated Turkey's willingness to take on Daesh-held Raqqa, once al-Bab's cleanup is completed.

Reminding that Turkey had already liberated northern Syrian cities including the axis lying between Azaz, Jarablus, and al-Bab, Kalın also said that Turkey's success will inevitably press the U.S. to further reassess its policies which, so far, have consisted of backing the PYD terrorists occupying large swathes of lands in northeastern Syria.

Kalın added that Turkey is currently in contact with the Trump administration, and has provided necessary evidence indicating that the PYD terrorists continue to operate in a disguised form in the western bank of Euphrates River, despite U.S. pledges that they would leave.

Highlighting the importance of an Erdoğan-Trump discussion about the Syrian question, Kalın said that they are trying to arrange a meeting as soon as possible, while also noting that the meeting would, at the latest, take place next May when both Erdoğan and Trump will be attending a NATO summit.

Relations between Turkey and the U.S. entered a strained period under the Obama administration, as the latter refused to cooperate with Turkey against terrorism, and even supported PKK/PYD terrorists on the ground in Syria.

Turkey reiterated that it will not allow an independent terrorist state presence along its borders, and launched Operation Euphrates Shield in August 2016 to fight against the PKK/PYD and Daesh.