Manbij is Turkey's next target in Syria: Erdoğan 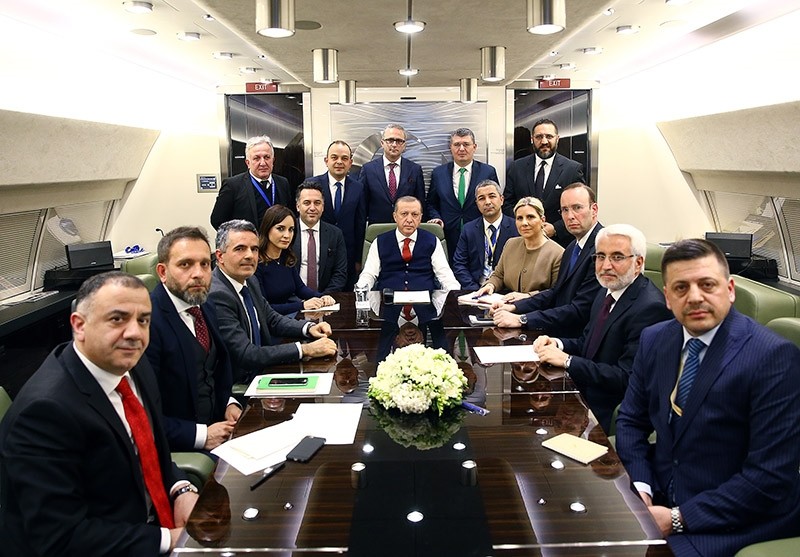 Turkish President Recep Tayyip Erdoğan said on Thursday that Turkey's next target in Syria is the liberation of Manbij and Raqqa, respectively controlled by the Syrian Democratic Forces (SDF), which is constituted and controlled mostly by militants from the PKK's Syrian affiliate People's Protection Units (YPG), and the Daesh terror group.

Talking with journalists in the presidential plane during his return trip from Pakistan, Erdoğan reiterated that Turkey shall not allow an independent terrorist state to be present along its border.

''After the liberation of al-Bab from Daesh terrorists, Turkey's new target in Syria is Manbij. Manbij is a city which belongs to Arabs, and the SDF must also not be in Raqqa,'' the Turkish president said.

Answering a question regarding U.S. support to the SDF, Erdoğan noted that the new Trump administration does not seem to have yet reached a final decision as to how the operation to free Raqqa from Daesh should be organized.

''Their chief of staff [U.S. general Joseph Dunford], and the new head of the CIA [Mike Pompeo] came to Turkey and we also told them that the SDF must be excluded from the Raqqa operation. It is impossible that Turkey accepts the presence of armed terrorists along its borders,'' Erdoğan said.

Erdoğan added that, if needed, Turkey can cooperate with Russia for this purpose, while also noting that Turkey does not plan on settling in Syria permanently.

On February 23, Turkish army and FSA units cleared the northern Syrian town of al-Bab from Daesh terrorists in a successful progress.

Turkey launched Operation Euphrates Shield on Aug. 24, 2016, declaring that it was exercising its right of self-defense codified under United Nations Charter Article 51. A National Security Council press release on Nov. 30, 2016 stated that the operation's objectives are to maintain border security and confront Daesh terrorism within the framework of the U.N. Charter.

It also emphasized not allowing the PKK terrorist organization, or its Syrian affiliates the Democratic Union Party (PYD) and its armed wing the People's Protection Units (YPG), to establish a corridor of terror on Turkey's doorstep.