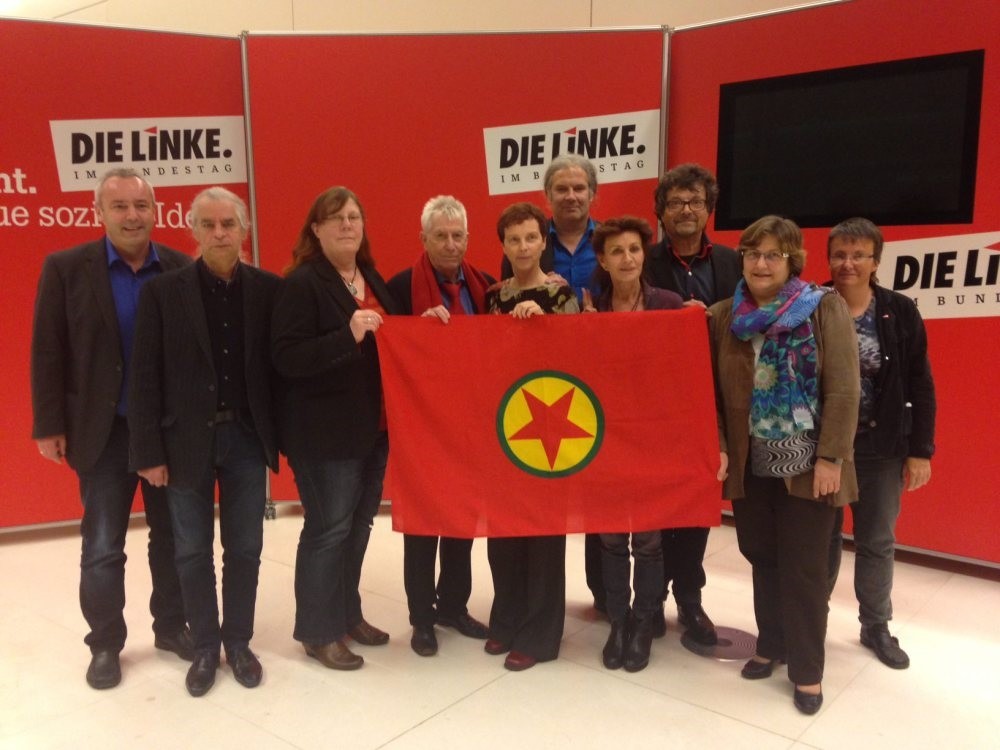 Several German parliamentarians pose with the PKK flag in the German Bundestag, in a photo from November, 2014.
by Daily Sabah Mar 04, 2017 12:00 am

While Germany allows PKK sympathizers to hold rallies across the country, even giving permission to its leader to address followers, on Thursday it banned speeches and meetings by two Turkish ministers'. Both Turkish ruling and opposition politicians reacted strongly to the scandalous decision. Experts claimed that Germany is trying to demonize the democratically elected and legitimate government in Turkey

German authorities' controversial ban on meetings by two Turkish ministers on Thursday caused tension between the two countries, as politicians from the government and opposition slammed the decision, describing it as an "anti-democratic practice." German authorities in the southern German town of Gaggenau controversially withdrew permission on Thursday for an event where Justice Minister Bekir Bozdağ was to speak to Turkish citizens in a rally and deliver a speech about the upcoming referendum on April 16 for the proposed constitutional amendments in Turkey, an event organized by the Union of European Turkish Democrats (UETD).

A statement released by the city of Gaggenau indicated that the event was canceled due to security-related concerns and the "limited capacity of the hall" where the event would have been held. Despite strong reactions by Turkish politicians, Gaggenau Mayor Michael Pfeiffer said the decision was not a political one. However, Bozdağ was not the only Turkish minister whose program was canceled by German authorities. According to the German Press Agency (DPA), an official from the city of Cologne said a March 5 event where Economy Minister Nihat Zeybekçi was to hold a rally through the UETD was also canceled.

Evaluating the crisis meeting between Turkey and Germany to Daily Sabah, Enes Bayraklı, from the Turkish-German University, stated that Germany is trying to demonize the elected and legitimate government in Turkey. "Germany is trying to reduce the influence of Turkey on its own citizens there. When Germany does that through undermining the legitimate government, it empowers left groups affiliated with terrorist organizations," he said. According to Bayraklı, in the eyes of the German state there are two types of Turkish people living in Germany: Good Turks and bad Turks.

"On one hand, the good ones are those who are close to the terrorist groups, and they also tend to be assimilated. On the other hand, the bad ones are conservative and close to the Justice and Development Party (AK Party)," he added.Bayraklı also pointed out that the upcoming referendum has likely had a cyclical impact, sparking the meeting crisis. Emphasizing Germany's demand for an asymmetrical relationship, like in the 1990s, between the two countries, Bayraklı stated that Germany does not want Turkey's active position in the economic and international arenas to protect its citizens. "Like it used to, Germany wants to intervene in Turkey's domestic affairs as well as it demands that Turkey not protect its citizens in Germany," he said.

Following the incident, the Turkish Foreign Ministry summoned German Ambassador to Ankara Martin Erdmann, and he was received by the deputy secretary responsible for European affairs, Mehmet Kemal Bozay. Turkey's written demarche was also delivered to Erdmann. Amid tensions between Ankara and Berlin, the foreign ministers of two countries' will meet in March 8.

Turkey's opposition parties criticized Germany after a local authority revoked permission for a meeting where Ankara's justice minister was scheduled to address members of the Turkish community.

Senior lawmakers from the Republican People's Party (CHP) and the Nationalist Movement Party (MHP) spoke to Anadolu Agency on Friday.

CHP Chairman Kemal Kılıçdaroğlu condemned the decision, saying the decision was not acceptable. "This is not right at all. You teach the world about democracy, but then you go ahead and ban two ministers from talking for this or that reason. We do not find this right at all," Kılıçdaroğlu said.

CHP group deputy chairman, Özgur Özel, said it was unacceptable to "censor" such a meeting, especially in a country that had high-level diplomatic ties with Turkey, adding, "It was an approach that questioned the sincerity of Germany's words on freedom of expression."

MHP group deputy chairman, Erkan Akçay, condemned "German executives who show this attitude," adding it was "wrong in every way" to prevent ministers from meeting their citizens. "Germany has to give up this wrong attitude as soon as possible," he said.

"It is very clear that this decision was a scandalous one beyond the municipality. It is a decision against diplomatic courtesy. Germany and German authorities, which keep mentioning democracy, the state of law, human rights and the rule of law, while accusing everyone else but themselves with non-compliance with democracy and human rights, have barred the Turkish community from its right of assembly, a principle of universal law, a human rights convention," Bozdağ said. Commenting on the future relations with Germany, Hüseyin Bağcı, from the Middle East Technical University (METU), stated that Turkey and Germany are avoiding a diplomatic debate at the top level at the present. "Neither Turkey nor Germany's prime ministers and presidents seem to have a comment about the current tension, thus it appears that both countries are trying to keep tensions down.'' Bağcı said. 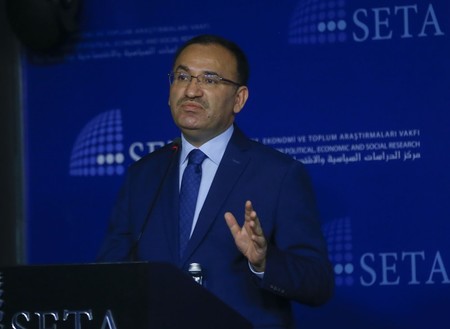 Bağcı also indicated that there is "Erdoğanphobia" in Germany, and it has increased tension between the two countries. "The German press continues to present President Recep Tayyip Erdoğan as a dictator, and this feeds the tension between the two countries,'' said Bağcı, adding that both Germany and Turkey should keep an open discussion to decrease tensions. Meanwhile, Foreign Minister Mevlüt Çavuşoğlu told reporters Friday morning regarding the issue that if Germany wants to maintain relations with Turkey it must learn how to behave. He added that Germany had to see Turkey as an equal partner, otherwise Turkey would respond without hesitation. The foreign minister also underlined that Germany's double standard toward Turkey and ongoing pressure would not discourage the Turkish people. Çavuşoğlu also called for cooperation between the two states, instead of Germany taking a patronizing stance.

On Friday, Turkey's development minister slammed Germany's decision to revoke permission for an address by Turkey's justice minister on Thursday to members of the local Turkish community. Speaking to reporters during an official visit Friday in Turkey's central Aksaray province, Lutfi Elvan described the move as "ugly" and "shameful," adding it "neither complies with freedom of speech nor democratic rights and freedoms." "It made us more upset as this incident happens in the heart of Europe and in one of the most important countries of the European Union, Germany," Elvan added. Turkey's EU minister blasted Germany for its decision to prevent the Turkish justice minister from addressing the expat community on Thursday, calling on the country to be consistent with democratic values. Speaking to reporters in Ankara on Friday, Omer Çelik said: "The right of assembly and demonstration is a democratic right. The countries that are most heard when it comes to democratic values must be consistent with these democratic values. The right of assembly and demonstration is a democratic right. Prevention of one of our democratic rights to meet our citizens, who are guaranteed by the principles of the Council of Europe and the European Union, means prevention of a democratic right."

Ruling Justice and Development (AK) Party group deputy chairman, Bülent Turan, condemned the move, saying, "Politics in Germany is prohibited, but there is freedom for terrorism."

German politicians not only canceled a Turkish minister's meeting, but also recently voiced opposition to President Recep Tayyip Erdoğan and Justice and Development Party (AK Party) officials holding rallies in Germany. On the other hand, the country is known for its broad tolerance of PKK terrorists that have fled from Turkey. Even though the PKK is recognized as a terrorist organization by the EU, it can freely hold demonstrations and organize events across Germany with the approval of the German government.

Germany's opposition left party criticized the planned appearance on Thursday of Turkey's justice minister at a political rally in southwest Germany and called on the government to deny him entry. While the German government has indicated that it has no plans to prevent Turkish officials from speaking to the 1.4 million Turkish voters in Germany, the issue of AK Party politicians holding rallies in Germany has been a hot issue between the countries' governments.

The registered 2.3 million Turkish voters living abroad will be able to cast their votes in 57 countries at Turkey's 119 foreign missions and 32 customs stations. With an estimated 3 million people, the largest Turkish community abroad is based in Germany.

A similar ban took place at a Turkish rally in Cologne following the July 15 coup attempt. Tens of thousands of Turks living in Germany gathered in the city to show solidarity with their compatriots back home to condemn the July 15 coup attempt perpetrated by the Gülenist Terror Group (FETÖ). Before the event, Germany's highest court decided to prevent President Erdoğan from addressing the rally via a video call. However, earlier on Sept. 3, 2011, German authorities allowed senior PKK commander Murat Karayılan to address a crowd at a culture festival.

Ankara has long criticized Germany for being a safe haven for PKK recruitment, propaganda and funding activities. The far-left terrorist group had more than 14,000 members and adherents in Germany, according to the 2015 annual report of German domestic intelligence agency, BfV.

Although the PKK is banned in Germany, which is home to a large Kurdish community, the terrorist group has been carrying out significant activities through various cultural associations. According to the BfV's annual report released in June, the PKK raised more than 13 million euros in Germany last year. The group, listed as a terrorist organization by the EU and the U.S., is responsible for the deaths of more than 44,000 people in a decades-long campaign against Turkey, and it has recently intensified its terrorist attacks.

Furthermore, Ankara also asked German authorities to take steps against FETÖ members residing in Germany. President Erdoğan criticized German authorities during German Chancellor Angela Merkel's recent visit to Turkey for their lack of a speedy process in the extradition of FETÖ members being sought by Turkey. "We've sent the U.S. 85 boxes of evidence, and we are still waiting for a legal decision," Erdoğan said, continuing his criticism of the U.S. where FETÖ leader Fetullah Gülen has been residing since 1999. He also called on German authorities to speed up their legal processes, as justice delayed is justice not served.