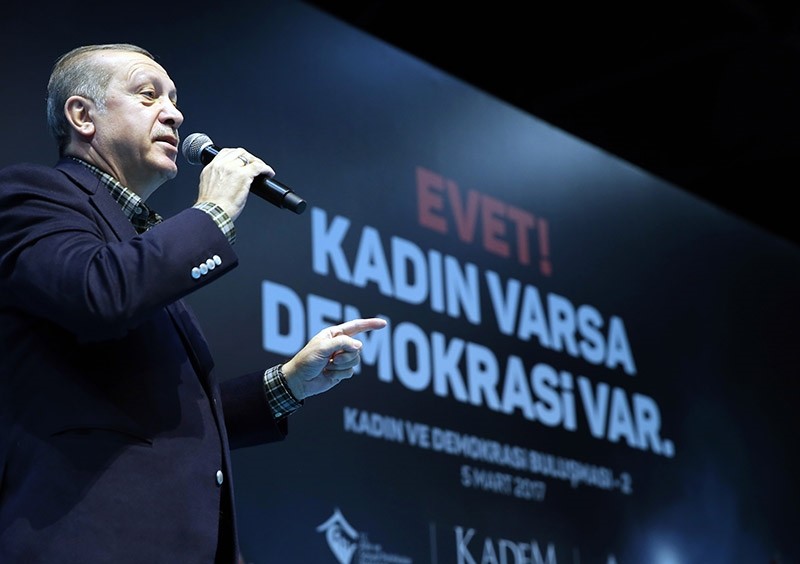 President Recep Tayyip Erdoğan has accused Germany on Sunday of practices reminiscent of the Nazi era after the country barred Turkish ministers and government officials from attending rallies gathering Turkish community, organized as part of the campaign of constitutional reform referendum scheduled on April 16.

Speaking during an event organized by the Women and Democracy Association (KADEM) in Istanbul, Erdoğan said German authorities think that by preventing Turkish ministers from meeting Turkish people living in that country vainly hope that the ''Yes'' votes in the upcoming April 16 referendum will turn into ''No''.

''Germany has gone astray from the path of democracy, its current practices have nothing to do with democracy and even comparable with those of the Nazi regime,'' the Turkish president said.

''We used to believe that Germany had left its Nazi experience behind, but revivalists prove us wrong. We don't want to see the resurgence of the Nazism in Germany,'' Erdoğan added.

Bozdağ strongly condemned the decision, saying that it was a purely fascistic practice. Despite strong reactions by Turkish politicians, Gaggenau Mayor Michael Pfeiffer said the decision was not a political one.

Turkish Economy Minister Nihat Zeybekci's planned address on Sunday to a Turkish community in the western city of Cologne was also cancelled by local authorities who cited ''security concerns.''

The German decision had drawn unified condemnation in Turkey.

Main opposition CHP Chair Kemal Kılıçdaroğlu condemned the decision, saying the decision was not acceptable. "This is not right at all. You teach the world about democracy, but then you go ahead and ban two ministers from talking for this or that reason. We do not find this right at all.''

MHP group deputy chairman, Erkan Akçay, condemned "German executives who show this attitude," while also noting that it was "wrong in every way" to prevent ministers from meeting their citizens. "Germany has to give up this wrong attitude as soon as possible,'' he also said.

Since the beginning of 2017, Germany adopted a harsher stance in its Turkey policy, which has been decried on several occasions by Turkish officials and political leaders who also warned German authorities that their decisions may have a dramatic impact on bilateral ties.

Earlier this year, Germany accused Turkish imams serving in Germany of espionage, hosted events and rallies organized by the PKK, an armed group that both Ankara and Berlin consider a terrorist organization, and alienated Turkish officials, when Chancellor Angela Merkel used the phrase "Islamist terrorism" during a press conference with Erdoğan in attendance on February 2.