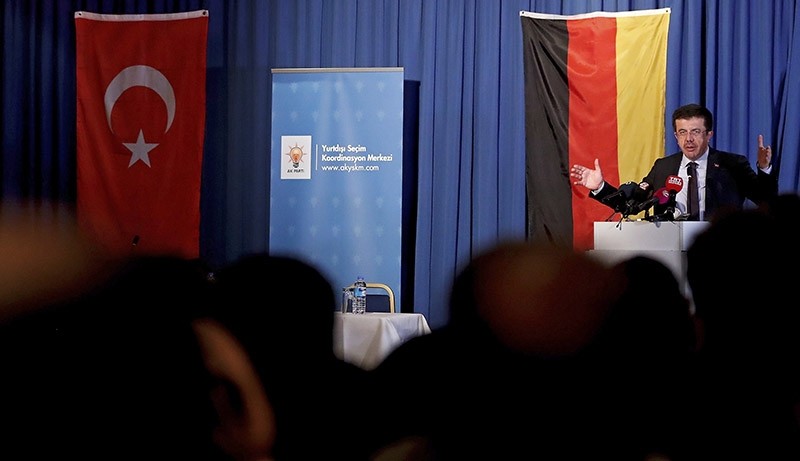 Turkish Economy Minister Nihat Zeybekci on Sunday met with the Turkish community at an event in the western German city of Cologne.

The meeting comes ahead of Turkey's April 16 referendum on constitutional reforms, including the crucial switch to a presidential system of governance.

The event was announced cancelled last week along with other meetings due to feature Justice Minister Bekir Bozdağ and Foreign Minister Mevlüt Çavuşoğlu, causing a rift between Berlin and Ankara.

Turkish officials, politicians condemned Germany's anti-democratic bans, with Turkish President Recep Tayyip Erdoğan warning Germany earlier on Sunday that its current practices are comparable with those of the Nazi regime.

Later on, German government has distanced itself from the bans.

In his speech Sunday, Zeybekci thanked Berlin for letting him meet with members of the community at the indoors event hosted by the local branch of Turkey's ruling Justice and Development (AK) Party.

The minister, who did not criticize German authorities, instead described Germany as a "friendly nation".

Ahead of the bans last week, there were calls from German opposition parties and media for a blackout on Turkish politicians ahead of the referendum.

Among Germany's 3 million-strong Turkish community, nearly 1.5 million of them are eligible to vote. They will be able to cast their votes at Turkish consulates in Germany between March 27 and April 9.