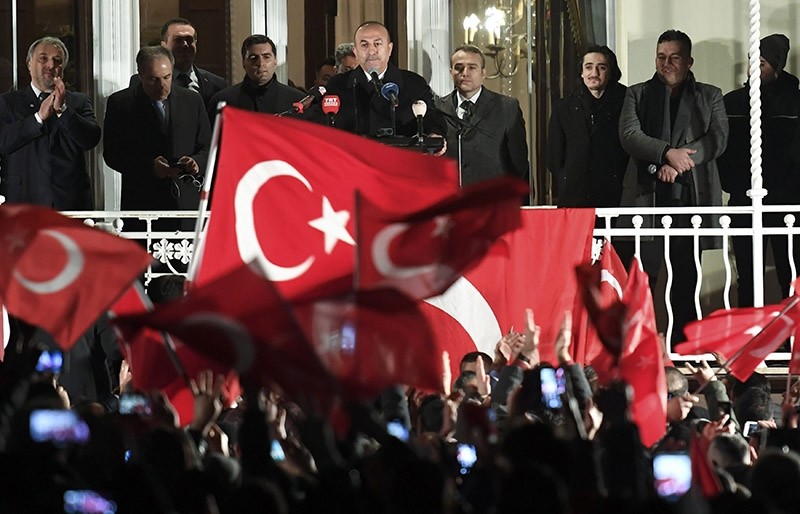 Foreign Minister Mevlut Cavusoglu speaks from a balcony during an election campaign rally for the upcoming Turkish referendum in Hamburg, Germany March 7, 2017. (Reuters Photo)
by Daily Sabah Mar 07, 2017 12:00 am

Foreign Minister Mevlüt Çavuşoğlu accused German authorities on Tuesday of systematically preventing Turkish officials from campaigning while addressing the Turkish community at the residence of the Turkish Consulate General in the northern German city of Hamburg.

As three of the foreign minister's previous meetings had been cancelled or relocated, Çavuşoğlu stated that Germany hinders Turkish officials' scheduled meetings by closing premises as a way to exert pressure on Turkish citizens.

Çavuşoğlu said that Turkey has always considered Germany a friendly nation, but underlined that the country's anti-Turkey sentiment and the pressure it has exerted on Turkish citizens were not reflecting this relationship.

"Preventions cannot keep us apart," Çavuşoğlu told the audience as he called on Germany to change its attitude.

The foreign minister also reminded that Turkey took it as a principle not to interfere in another country's domestic policy, stating that any politician from Germany could come to Turkey to meet with German citizens, as this would be the necessity of democracy.

Çavuşoğlu said that Turkey never spoke out against Germany to Turkish citizens living there, instead always stressed that their integration in Germany was of great importance.

The foreign minister also raised concerns about growing racism in Europe and added that he would meet with his German counterpart Sigmar Gabriel on Wednesday to discuss this matter.

Since the beginning of 2017, Germany has adopted a harsher and more hostile stance in its Turkey policy, which has been decried on several occasions by Turkish officials and political leaders who have also warned German authorities that their decisions may have a dramatic impact on bilateral ties.

Earlier this year, Germany accused Turkish imams serving in Germany of espionage, hosted events and rallies organized by the PKK -- an armed group that both Ankara and Berlin consider a terrorist organization-- and alienated Turkish officials when Chancellor Angela Merkel used the phrase "Islamist terrorism" during a press conference with President Recep Tayyip Erdoğan in attendance on February 2.