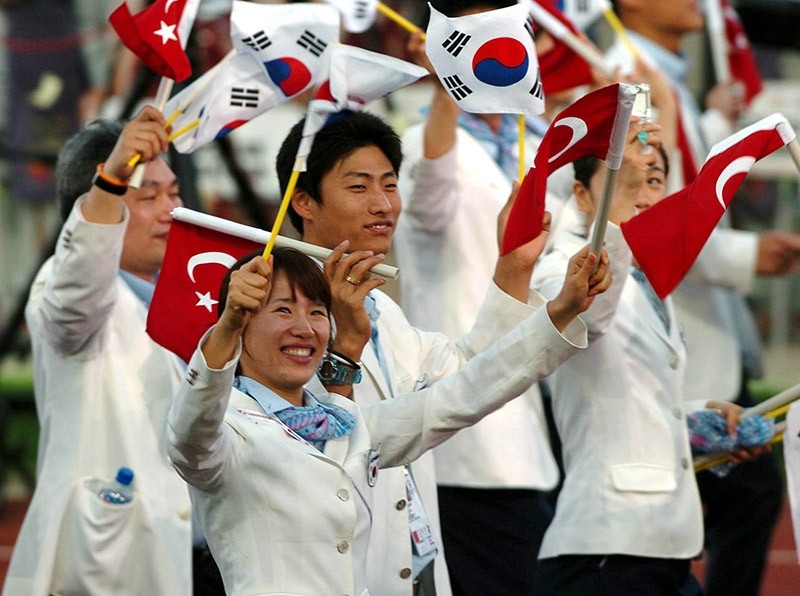 South Korean delegation waves at spectators during the opening ceremony of Universiade University Olympic Games in Izmir, on Aug. 11, 2005. (AA Photo)
by Daily Sabah Mar 08, 2017 12:00 am

As Turkey and South Korea enjoy favorable economic bilateral relations, the two countries marked the 60th anniversary of the establishment of diplomatic relations between the Republic of Turkey and the Republic of Korea on March 8. Along with the economic bilateral relations, Turkey and South Korea also share long-lasting historical ties, as Turkish soldiers participated in the United Nations (U.N.) mission during the Korean War, after which war veterans also helped to further develop ties between the two countries.

Highlighting 60 years of diplomatic relations, the Turkish Foreign Ministry released a statement describing the relations as an "important milestone for the Turkish and Korean people who are connected to each other by long-standing ties of affection, friendship and respect." While underlining that the relations between Turkey and South Korea have been elevated to "strategic partnership level," the Foreign Ministry's statement said Turkey's "excellent, multidimensional relations with the Republic of Korea, will continue to grow further, as they always have, on the basis of serving the mutual prosperity, well-being of our peoples, global peace and stability."

Furthermore, in the framework of the 60 years of relations "2017 was mutually declared as 'Turkish-Korean Culture Year,' which will be celebrated through numerous cultural activities in both countries."

Turkey joined the Korean War under U.N. Command during 1950 and 1953 in efforts to support South Korea in its struggle for freedom, democracy and independence, where a total of 741 Turkish troops were killed during the war. "The heroic struggle shown by Turkish soldiers during the Korean War was not only effective in winning the war, but it also enabled our deep-rooted friendship with the Korean people to evolve into a unique 'blood brotherhood,'" the statement said.