FM Çavuşoğlu: Germany must decide if it will remain Turkey's ally 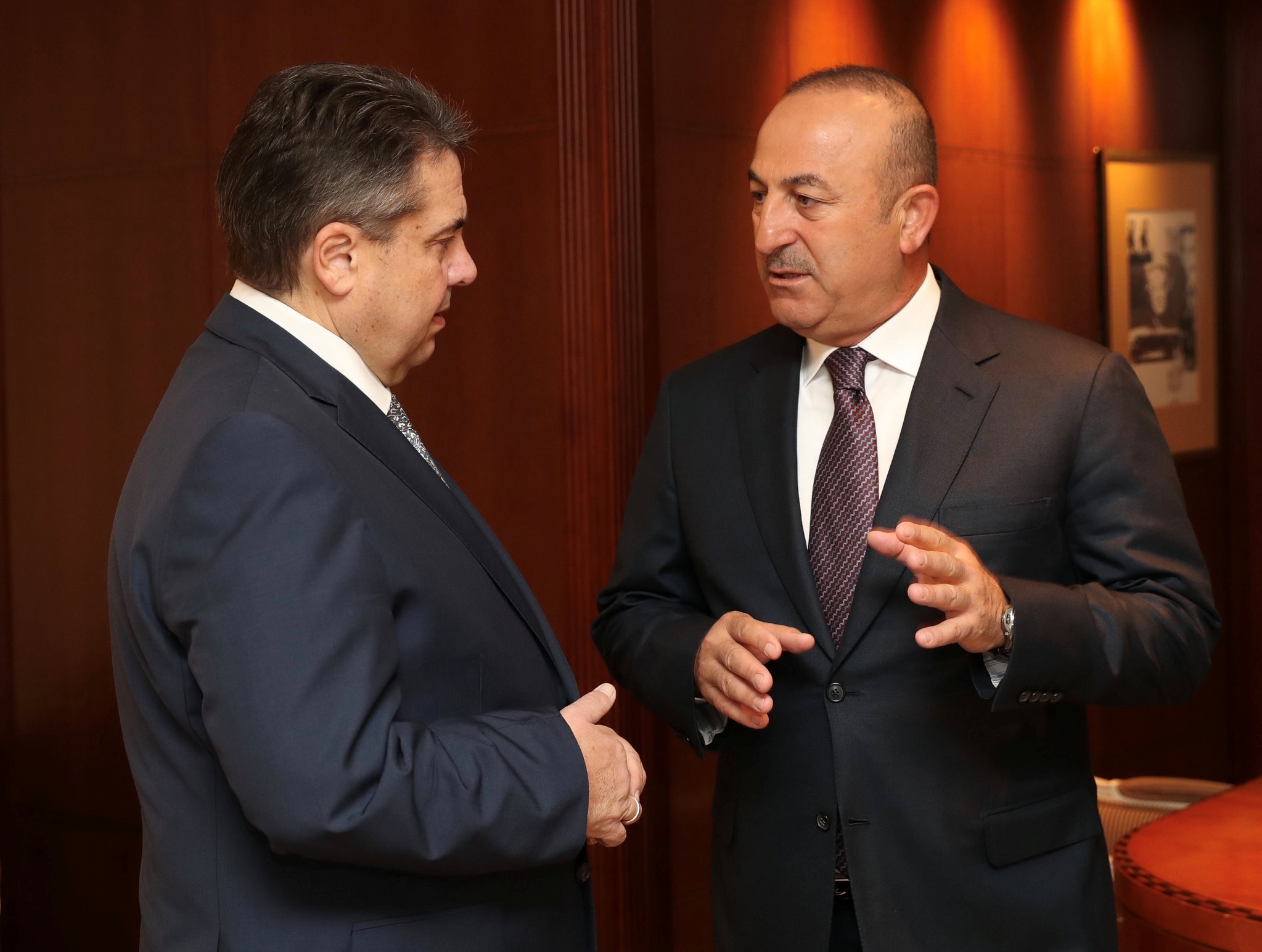 Foreign Minister Mevlüt Çavuşoğlu drew attention to how the systematic smear campaign against Turkey and President Erdoğan in Germany, has strained Ankara-Berlin relations, following a meeting with his German counterpart Sigmar Gabriel in Berlin after a controversial ban on Turkish ministers' conferences organized in German cities

Ankara delivered a strong message to Berlin during Foreign Minister Mevlüt Çavuşoğlu's visit to Germany, saying anti-Turkey and anti-Erdoğan sentiments, as well as Germany's indifference to the PKK terrorist organization and the activity of other terror groups across Germany are unwelcome by the Turkish nation and the government. He called on Germany to make a decision as to whether they will remain an ally of Turkey. "We discussed issues that are disturbing us, such as a systematic smear campaign against Turkey in attempts to turn our president into a subject of insult as well as the fact that the PKK and other terrorist groups freely conduct activities in that country," Minister Çavuşoğlu said after his meeting with German counterpart Sigmar Gabriel in Berlin. Ankara has long criticized Berlin for remaining indifferent to terror group activities in German cities, namely the PKK, which is recognized as a terror organization by the U.S., Turkey and the European Union, and the Gülenist Terror Group (FETÖ). According to an annual report by German domestic intelligence agency BfV in 2015, the PKK had more than 14,000 members and adherents in the country. The PKK has carried out controversial activities via various cultural associations in Germany.

According to the BfV's annual report released in June of last year, the PKK raised more than 13 million euros ($14.3 million) in Germany in 2016. The organization is responsible for the deaths of more than 44,000 people in a decades-long campaign against Turkey which recently intensified after the collapse of a ceasefire.

Furthermore, Ankara has also asked German authorities to take steps against FETÖ members residing in Germany. A recent report published by the Political, Economic and Social Research Foundation (SETA), an Istanbul-based think tank, has revealed that FETÖ has been using Germany, the host of the largest Turkish population in Europe, as the main center for its activities. It accused German authorities of having embraced the controversial structures of the organization with open arms. The report also said if Germany treats FETÖ the same way it treats the PKK terrorist organization, its relations with Turkey may be forced into a difficult position.

The meeting Berlin yesterday is the first meeting of government representatives since a diplomatic row emerged over German authorities banning the rallies of Turkish ministers who were planning to meet with Turkish citizens in Germany as part of the"Yes"campaign for the upcoming April 16 referendum in Turkey.

Çavuşoğlu said despite differences in opinion, both countries should focus on strengthening relations due to Turkey and Germany's ties as historic allies: "Germany must decide. Are we going to continue the [diplomatic] journey as two friends or are we going to separate from each other? We want to continue as allies," Çavuşoğlu said, underscoring that relations between the two allies should be exemplary and emphasizing that strained relations do not benefit either country.

"I also said [to my German counterpart] that we are disturbed by the systemic oppression against the Turkish community, a situation which has significant effects on the Turkish community in Germany. These do, in reality, point to a contradiction in German policy," the foreign minister asserted.

Police and local authorities in Hamburg have already canceled Çavuşoğlu's meetings twice. Last Friday, Cologne authorities withdrew permission for Turkey's Minister of Economy Nihat Zeybekci to use a hall to deliver a speech on the outskirts of the city. Zeybekci went on to address Turks in Cologne on Sunday.

Çavuşoğlu said Ankara finds it surprising that the ministers were banned from holding events for Turkish citizens, adding that the Turkish communities in Europe are important factors in Turkey's foreign policy and that all countries side with their diasporas abroad.

"[Germany's decision] does not align with democracy, human rights, basic freedoms or the standards of Europe," the minister said. Ankara urged Berlin to maintain impartiality regarding the upcoming referendum in Turkey, saying Ankara has not interfered with election processes in Germany.

After a journalist told Çavuşoğlu that German citizens fear visiting Turkey due to 'detention' threats, Çavuşoğlu replied, "You must be joking," adding that everyone enjoys their holiday in Turkey.

Çavuşoğlu also invited Germans to visit Turkey and wished German tourists with plans to visit Turkey a great tourism season. After his meeting with the German minister, Çavuşoğlu is set to attend the International Travel Trade Show in Berlin to promote Turkish tourism.

Under the auspices of these concerns, German Foreign Minister Sagmar Gabriel yesterday met with Çavuşoğlu at the Adlon Hotel, where he declared that tension between Turkey and Germany can be resolved through negotiations and ensuing the normalization of bilateral relations, underlining that tensions could damage both Turkey and Germany. Gabriel stated that the meeting was "good, open, honest and friendly while also challenging at the same time," and pointed out that "No matter how Turkey evaluates our thoughts and no matter how vast our differences of opinion are, there is no other option except to negotiate."

Gabriel also emphasized the importance of amicable relations between both Turks and Germans, saying: "Despite all the problems today, I think that the friendship and cooperation of [these two NATO allies] should be remembered for the great achievements that Turkey has contributed to Germany's development."
RELATED TOPICS