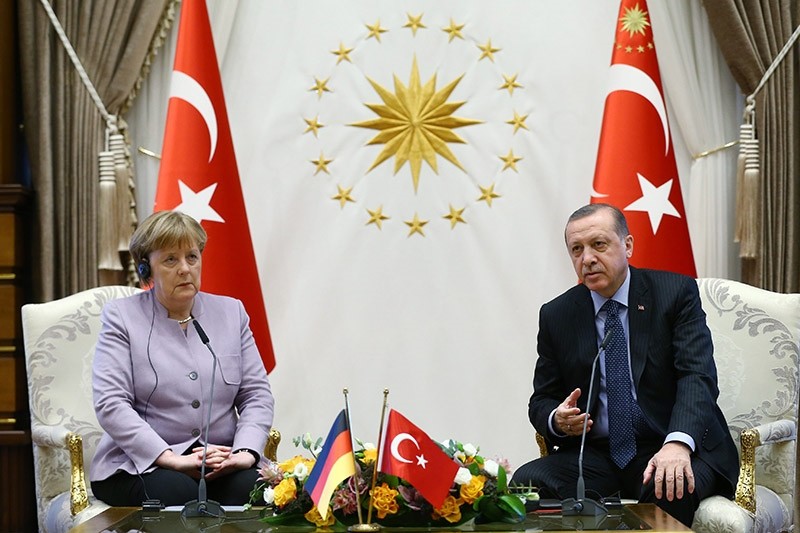 Turkey has criticized the German authorities for not taking a concrete stance against the PKK terror group's activities across the country, in response to German Chancellor Angela Merkel's comment that Berlin and Ankara have a difference of opinion on some issues and amid recent tension over the banning of Turkish ministers from holding rallies in Germany. Presidential spokesperson İbrahim Kalın said yesterday that Turkey has a different stance to Germany in its treatment of terror groups.

"We do have differences of opinion, as Merkel said. They always leave us without an answer when we ask why the terror groups are free in Europe and why they do not take any measures against those groups. They, themselves write how the PKK terror group has structured itself throughout Germany in the last 10 years. The main upsetting issue is Germany not taking any measures against the PKK despite all this," Kalın said.

"Europe must first halt the terror groups' activities. Anti-Turkish positions are being used as a tool," he added.

Ankara has long criticized Berlin for remaining indifferent to terror group activities in German cities, especially by the Gülenist Terror Group (FETÖ) and the PKK, which is recognized as a terror organization by the U.S., Turkey and the European Union. According to an annual report by German domestic intelligence agency BfV in 2015, the PKK had more than 14,000 members and adherents in the country. The PKK has carried out controversial activities via a number of various cultural associations in Germany.

"One of the most important topics in our political agenda [in Turkey] is some of the European states' ban against our ministers from meeting our citizens abroad. Such bans will not halt our connection with our citizens in Europe. The best answer from our citizens will be to go to the ballot box," Kalın added.

Ankara has repeatedly drawn attention to the rise of anti-Muslim, anti-Semitic, and xenophobic tendencies across European cities. Turkish politicians have argued that the rise of far-right populism in European politics is in contradiction with the democratic values that the continent has been proud of for years.

Foreign Minister Mevlüt Çavuşoğlu, whose events have faced cancelation in Germany, also spoke about the ongoing diplomatic standoff between Turkey and Germany yesterday.

Speaking after his arrival from Germany at a private event in Ankara, Çavuşoğlu said: "The meeting with German Foreign Minister Sigmar Gabriel lasted for 90 minutes. It was a friendly but very lucid meeting, where we addressed all matters. We told them that Germany's position is systematic, and that the ban was organized by German intelligence in cooperation with the police. They [German authorities] create all kinds of pressure, and finally shut down the businesses as this has been the situation for 20 years.

"I have told them to be honest and lucid, as I told my counterparts that they are on the side of the "no" voters [in the upcoming referendum on the constitutional amendments]. Germany should not side with anyone. We have visited Germany multiple times in the past and never made a statement against Germany. We tell our citizens to integrate with Germany society, while being aware of their rights. However, you [referring to Germany] are interfering with our referendum.

Over the past few days, German local authorities canceled several meetings that aimed to bring Turkish government officials together with Turkish citizens in Germany as part of the upcoming April 16 constitutional referendum in Turkey, scheduled in various parts of Germany, by citing poor excuses, such as the inadequacy of parking lots or security concerns. Turkish officials slammed Germany's hostile stance, saying that they were reminiscent of the fascistic practices of the 1930s.

The foreign minister also responded to Merkel's comments that accused Turkey of likening the German government to the Nazis, saying, "This is a very sensitive matter because we did not say the current German administration is a Nazi administration, we actually said that their practices are evocative of Nazi practices. There in Germany, the politicians and media call our president a dictator, they recently cursed at our Economy Minister Nihat Zeybekçi, calling him a 'leashed dog.' Such practices have not happened in Germany since the Nazi era, thus causing us to remember the practices of that [Nazi] era. Actually, the general situation in Europe is reminiscent of the situation prior to World War II."