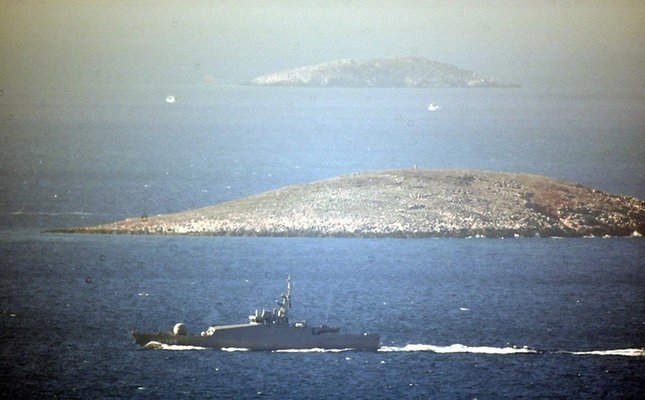 The disputed Kardak islets, which led to a diplomatic spat between Turkey and Greece
by Daily Sabah Mar 09, 2017 12:00 am
The Ministry of Foreign Affairs released a statement late Wednesday in which it criticed Greek President Prokopis Pavlopulos' remarks regarding his country's defense rights in the Aegean Sea.

"We are content that Greek President Pavlopulos desires to develop friendly relations with our country. Nevertheless, we also observe with concern and receive with astonishment his remarks showing a serious lack of knowledge in the fundamental principles of international law," the statement said.

"The Treaty of Lausanne has instated disarmament in the Aegean Sea after taking Turkey's [regional] security concerns into consideration. After Lausanne, the Paris Peace Treaty also more clearly defined and solidified the status of the Aegean... Our objection to Greece's military activity in the Aegean is a fundamental right bestowed upon our country within the scope of international law, and also a duty with regards to preserving peace and stability in the region," the statement added.

"Greece is determined, on the basis of international… and European law, to defend its borders, its territorial integrity and its sovereignty," the Greek President said Tuesday, implying that his country will increase military activity in the Aegean, which is illegal according to the abovementioned treaties.
RELATED TOPICS