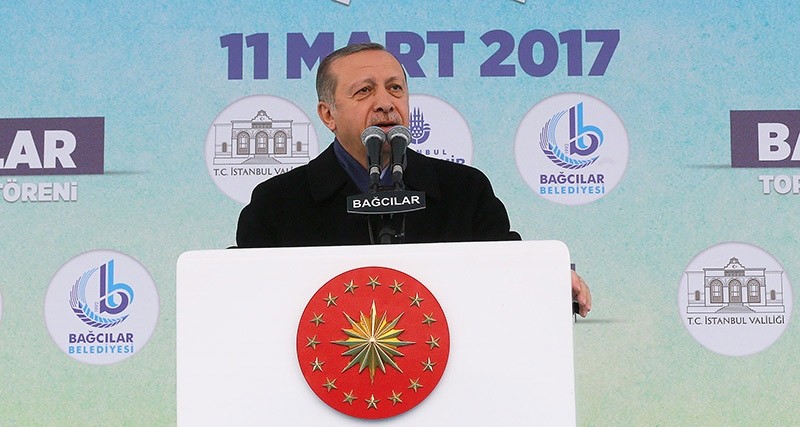 President Recep Tayyip Erdoğan has slammed the Netherlands on Saturday after the country revoked the landing permission of Turkish Foreign Minister Mevlüt Çavuşoğlu's plane in a bid to prevent the minister from meeting with the Turkish citizens in the Netherlands within the framework of Turkey's constitutional amendment referendum scheduled on April 16.

Speaking at a rally in Istanbul's Bağcılar district, Erdoğan said that the Netherlands vainly tries to influence the outcome of Turkey's constitutional referendum by attempting to hinder Çavuşoğlu from gathering with Turkish citizens living in the country, and who are eligible to vote in Turkish elections.

''Our citizens living over there will give the Netherlands the best answer in the upcoming referendum,'' Erdoğan said, referring to the Dutch authorities' obvious attempts to influence the outcome of the referendum in favor of the ''No'' vote.

Erdoğan noted that nobody could attempt to force the Turkish nation into submission, referring to how the nation foiled a coup attempt on July 15, by taking to the streets and standing against pro-coup tanks and soldiers.

Geert Wilders, the leader of the Dutch anti-Islam Party for Freedom (PVV) had also held a short demonstration in front of the Turkish Embassy at the Hague on March 7.

Despite all attempts to prevent him from meeting Turks in the Netherlands, Çavuşoğlu had vowed earlier Saturday to go to the Netherlands. Later on the same day, Dutch officials revoked his plane's landing permission on the Dutch soil citing excuses such as security concerns.