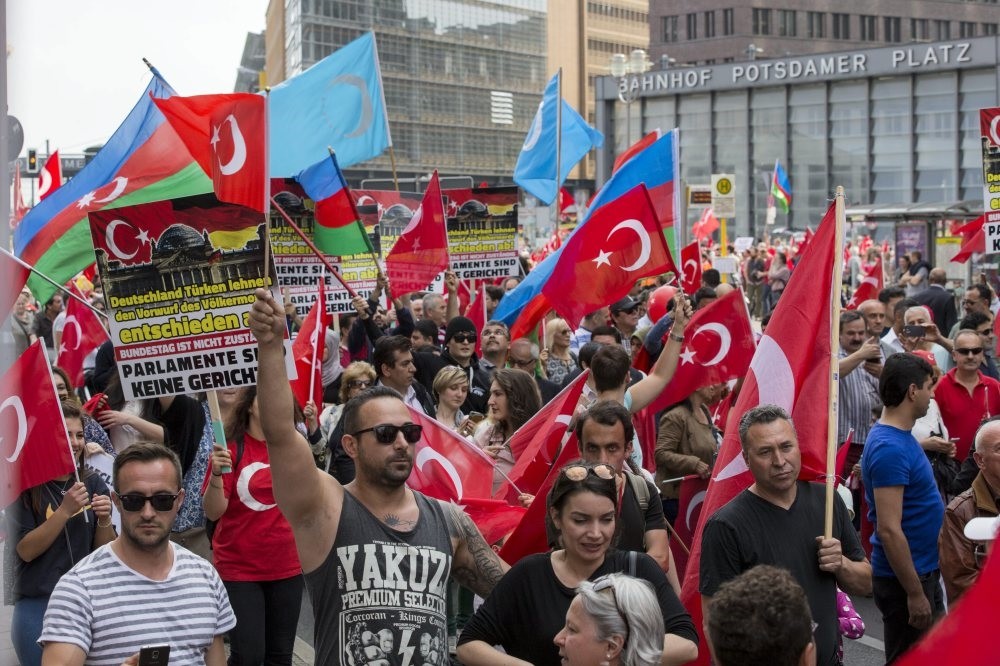 Turks in Germany spoke to Daily Sabah about the recent tensions in Turkish-German relations following Berlin's ban on Turkish politicians speeches, and blamed German government for its hypocritical attitude regarding freedom of speech and hostile manner against Ankara

Amid a continuing row between Ankara and Berlin that started after Germany prevented Turkish ministers from holding rallies in the country, Turks in Germany blame the German government for the escalating tension between the two countries. Germany, home to more than 3 million Turks, is Turkey's biggest trade partner. In addition, every year nearly 6 million Germans spend their holiday in Turkey. However, despite these strong ties, bilateral relations between the two countries soured after Germany undemocratically banned Turkish ministers' rallies across the country. Foreign Minister Mevlüt Çavuşoğlu said that Germany's efforts to prevent these rallies are part of a plan to systematically pressure Turkish citizens in Germany.

"This is systematic obstruction, and Germany is applying systematic pressure on our citizens. This is unacceptable. We always want to see Germany as a friend, but Germany's systematic anti-Turkey approach does not suit our friendship," Çavusoğlu said on March 7.

German-Turkish Ekrem Korkmaz, 46, echoes Çavuşoğlu. "I've been living in Germany for 20 years, and German pressure toward the Turkish community is not a new thing. The German state considers us a threat because of our strong desire to preserve our culture, language and religion," Korkmaz said, while sipping his tea in a fancy coffeehouse in Neukölln, Berlin. "The German state has always wanted to assimilate Turks in Germany; they never think about integration policies," he added. A new statistical survey of Germany, Datenreport 2016: Social Report for the Federal Republic of Germany, shows that Ekrem Korkmaz has a point. According to the results, 51 percent of respondents agree that "as an ethnic Turk, I feel like a second class citizen," while 54 percent of respondents agree that "regardless of how hard I try, I am not accepted as a member of German society."

Another German-Turk, Oya Güven, a kindergarten teacher, has a different perspective. Güven believes that German Chancellor Angela Merkel's conservative CDU is currently losing power and that Merkel's government intentionally increased tension with Turkey to stop sliding votes. "As you know, there is a general election in September, and the anti-immigrant Alternative for Germany's (AfD) rise in the recent poll caused deep concern for Merkel's party. I believe Merkel tries to consolidate right votes by fuelling anti Turkey sentiment," Güven said in Kreuzberg's famous Tadım Restaurant. In fact the most recent polls in Ipsos reveal that Merkel's CDU is bleeding. The Ipsos poll revealed on March 8 that Merkel's conservatives and the center-left Social Democrats (SPD) are running neck-and-neck ahead of national elections, while AfD rose to 11 percent.

Germany is the leading economic powerhouse in the European Union, and the country represents itself as a defender of western values. However, German arrogance that tries to lecture other countries over democratic values not only poisons Turkish-German bilateral relations, but also isolates Germany inside Europe. "If Ms. Merkel looks out from the glass box of the chancellor's office in Berlin, there is trouble on every horizon. To the east are the ever more authoritarian and Germanophobic governments of Poland and Hungary," Gideon Rachman from the Financial Times wrote on March 6. "And further east a hostile Russia. To the west, is the U.S. of Donald Trump; to the north the U.K. of Brexit. And to the south lies Italy and Greece, two troubled countries that increasingly blame Germany for their economic woes," Rachman added.Some others believe that tension between the two countries is a reflection of age-old Turkophobia in Germany. "Germans have always looked at Turks as second-class people. Thus, they cannot accept President (Recep Tayyip) Erdoğan's criticism and his calls to be equal partners," Mehmet Parlak, 37, said. "Of course, they [Germans) don't want Turkey's economic development. Look at this Tegel Airport: It's a shame for Germany. Turkey is building the world biggest airport, while they are not capable enough to build a modern airport in their capital," Turkish businessman Necati Çınar said while waiting for his return flight to Istanbul.

German government stats shows that 91 mosques were attacked in the country in 2016, and in September last year bomb attacks hit a mosque and a convention center in the eastern German city of Dresden. Rising anti-Islamic and anti-Turkish sentiment are an unfortunate fact in Germany; it's noticeable even by members of the various migrant groups. "The German press has depicted Turkish President Erdoğan like a devil for many years. I cannot understand why the German media obsesses so much about Erdoğan and Turkey," Russian-German taxi driver Igor Lebedev, 46, said. "If Germany was a serious defender of western values, they would pay attention to human rights failures in Russia. But they only criticize Turkey, while closing their eyes to Russia, Hungary or other parts of Europe." Lebedev added.

Nevertheless, Muslims and Turks are not the only one group in Germany having concerns about rising fascism across the country. For instance, last January the leader of Hamberg's Jewish community, Daniel Killy, told the Jerusalem Post: "We no longer feel safe here." He went on to explain how a combination of extreme right-wing forces and deteriorating security steeped in hatred" for Jews were resulting in anti-Semitism.

All the worrisome trends and ongoing anti-Turkey propaganda cannot prevent German-Turks attachment to Turkey. "I'm a son of first generation of a Turkish family, and I was born in Germany. Even though I'm a German citizen, Turkishness is my inheritance, and slanders against Turkey cannot change my feelings," Germany born engineer Serhat Demir, 27, said while shopping at Berlin's fancy shopping mall KaDeWe. "I'm a German citizen and not eligible to vote in the upcoming Turkish referendum, but after all of these incidents I will definitely attend President Erdoğan's rally in Germany," Demir concluded.
RELATED TOPICS