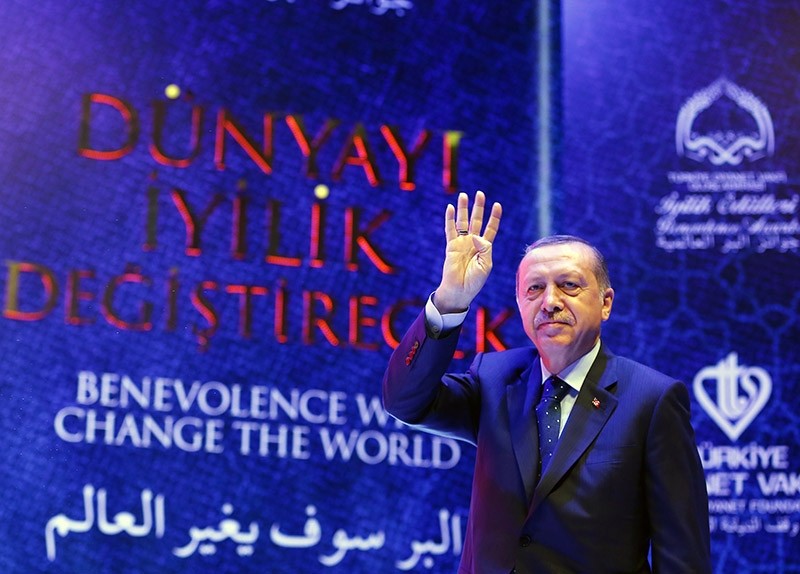 A handout photo made available by the Turkish President Press office shows, Turkish President Recep Tayyip Erdou011fan waving to his supporters during the International Benevolence Awards ceremony in Istanbul, Turkey, March 12, 2017.
by Daily Sabah with Agencies Mar 12, 2017 12:00 am

President Recep Tayyip Erdoğan on Sunday warned the Netherlands it would pay a price for preventing top ministers from holding rallies ahead of a referendum on switch to presidential system, as a crisis escalated with Turkey's key EU partners.

Erdoğan renewed his accusations that the Netherlands -- occupied by the Germans in World War II -- was behaving like the Nazis in its treatment of Turkish ministers. His previous comments accusing Germany of Nazism drew the ire of German politicians.

Analysts are predicting a tight outcome to the April 16 referendum and key Turkish ministers have planned major rallies in key EU cities to win votes from millions of Turks residing abroad.

But Turkey's Family Minister Fatma Betül Sayan Kaya was expelled after being prevented from addressing a rally in the Dutch port city of Rotterdam.

Also this weekend, The Hague refused to allow Foreign Minister Mevlüt Çavuşoğlu's plane to land ahead of a planned rally.

"Hey Holland! If you are sacrificing Turkish-Dutch relations for the sake of the elections on Wednesday, you will pay a price," Erdoğan told a ceremony in Istanbul, referring to the March 15 election in Turkey's NATO ally.

"They will learn what diplomacy is," he said, adding that what happened "cannot remain unanswered."

Faced with an upsurge in support for the ultra-right, European governments have come under pressure to take a hard line on Erdoğan who is accused by critics of authoritarianism.

Erdoğan reaffirmed his accusations from Saturday that the Dutch behavior over the Turkish visits was "Nazism, fascism".

"I have said that I had thought that Nazism was over, but that I was wrong. Nazism is alive in the West."

Later, speaking at a rally in western Kocaeli province, Erdoğan called on the international community to raise their voice and impose sanctions on the Netherlands.

"I call on all EU institutions and all institutions working to protect democracy, human rights and rule of law to raise their voices against Netherlands and even impose sanctions on it," he said.

"Netherlands acted like a banana republic as opposed to an EU member and a state of law," he added.

Police clashed with Turkish demonstrators in the Netherlands overnight while in Istanbul on Sunday a man climbed onto the roof of the Dutch consulate and replaced the Dutch flag with a Turkish flag.

The flag was later taken down and Turkish officials insisted the consulate had not been entered from the outside and "consular officials" had hoisted the flag on their own initiative. The consulate declined to comment.

A Dutch foreign ministry spokeswoman told AFP that the situation "remains unclear" and the Netherlands had "protested to the Turkish authorities" over the incident.

The latest row came after NATO allies Turkey and Germany sparred over the cancellation of a series of referendum campaign events there.

"The West has clearly shown its true face in the last couple of days," Erdogan said.

"What we have seen is a clear manifestation of Islamophobia," he added.

The president indicated that he himself plans to travel to Europe for rallies, a move that could potentially create an even greater row.

Erdoğan said: "I can go to any country I want if I have a diplomatic passport."

Çavuşoğlu, meanwhile, is set to address a rally in the eastern French city of Metz on Sunday.

The French foreign ministry has cleared his visit, a French official said.

"I thank France. France was not deceived by such games," Erdoğan said.

Kaya was stopped just outside the Turkish consulate by Dutch police, and after several hours of negotiations escorted back to the German border.

Kaya was given a hero's welcome by a crowd waving Turkish flags as she landed at Istanbul airport, saying she and her entourage were subjected to "rude and tough treatment".

The controversy sparked clashes in Rotterdam where after several hours of calm demonstrations, police moved in early Sunday to disperse over 1,000 people gathered near the Turkish consulate, charging the crowd on horseback and using dogs to regain control.

Protesters hit back, throwing rocks at riot police, while hundreds of cars jammed the streets blaring their horns and revving their engines.

The Dutch government said Kaya was "irresponsible" for attempting to visit after being told she was not welcome and Dutch Prime Minister Mark Rutte said "it was undesirable that she was here."

The Netherlands is home to some 400,000 people of Turkish origin, and Ankara is keen to harness votes of the diaspora in Europe ahead of the April 16 constitutional referendum on creating an executive presidency.

Germany is home to 1.4 million people eligible to vote in Turkey -- the fourth-largest electoral base after the cities of Istanbul, Ankara and Izmir.

Some 250 Turks gathered outside the Dutch consulate in Duesseldorf in a spontaneous demonstration on Saturday night, German police said Sunday, adding that "there were no incidents".
Last Update: Mar 12, 2017 9:55 pm
RELATED TOPICS