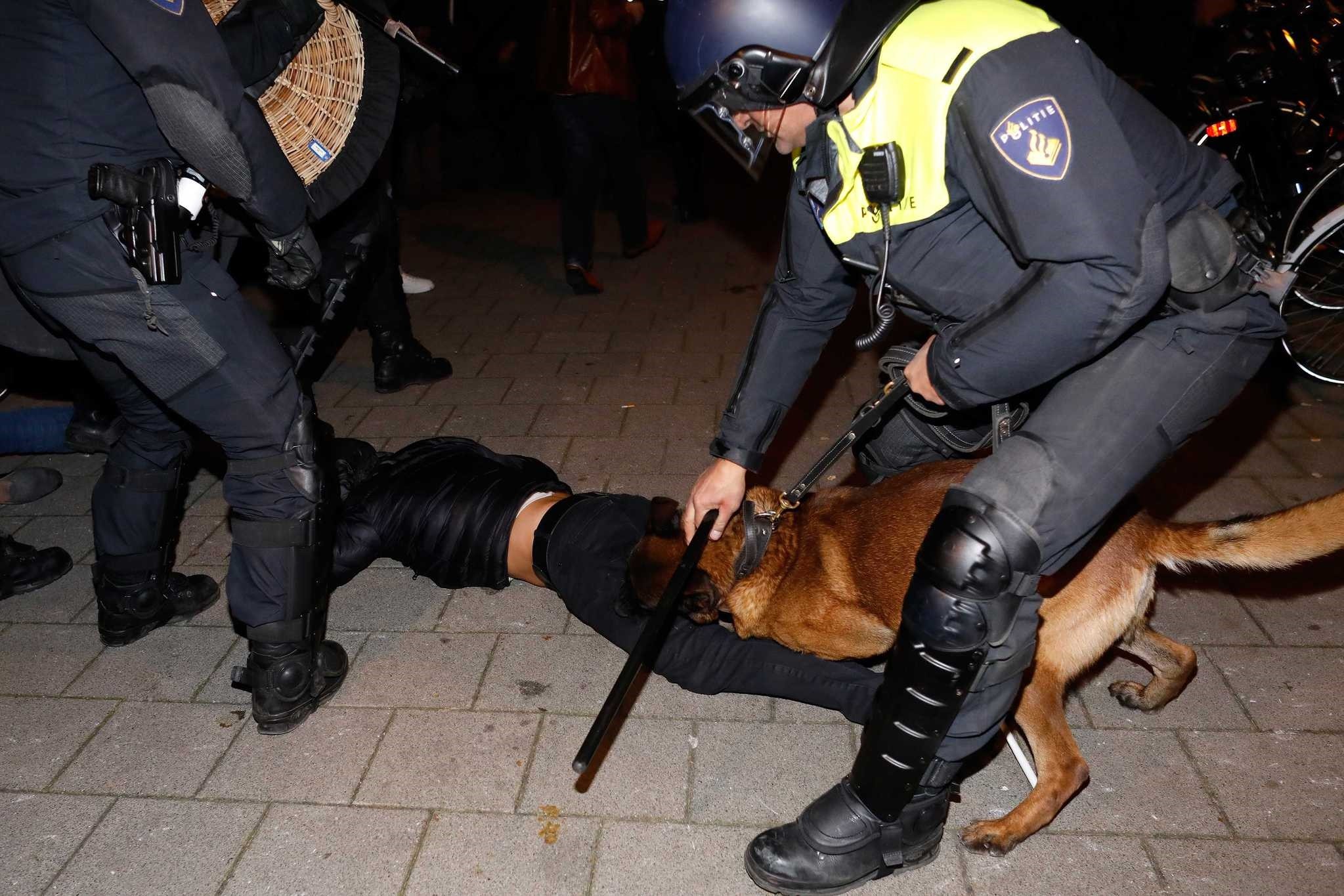 Dutch police forcefully dispersed peaceful demonstrators including the usage of K9 police dogs, water cannons and mounted police during which several protesters and reporters were injured, early Sunday.
by Mehmet Solmaz Mar 13, 2017 12:00 am

The undemocratic restriction against Minister Fatma Betül Sayan Kaya from entering the Turkish consulate and the treatment of Turkish citizens in Rotterdam by the Dutch authorities received harsh criticism from Ankara. Turkish politicians have said that retaliation will be made in kind against the actions by the Dutch authorities, which were termed ‘fascist'

The controversial treatment of Family and Social Policies Minister Fatma Betül Sayan Kaya by the Dutch government in Rotterdam, causing a severe diplomatic row between the two NATO allies, has received harsh criticism from Ankara, which said the Netherlands will face the consequences and pay the price for undemocratic actions against Minister Kaya and Turkish citizens in the Netherlands. Turkish authorities, including President Recep Tayyip Erdoğan, Prime Minister Binali Yıldırım and Foreign Minister Mevlüt Çavuşoğlu, slammed the incidents early Sunday, saying that the Dutch government's actions were signaling the rebirth of the fascist ideology. Dutch police detained Minister Kaya late Saturday, deporting her to Germany after declaring her an "undesirable alien."

Video footage shows the standoff between the ministerial convoy and the Rotterdam police, which was translated by an officer, meters away from the consulate. After being told to return with her convoy, Kaya retorted sharply: "I will go to the consulate building. That is a building belonging to my country and I am a minister of that country." She added: "There is no such international practice. I don't accept that decision, I reject it and I won't return to Germany." The treatment by the Dutch government received harsh criticism from politicians and thousands of people on social media channels. According to the "Charter of Fundamental Rights of the European Union," the EU built its union on certain fundamental values: "Conscious of its spiritual and moral heritage, the union is founded on the indivisible, universal values of human dignity, freedom, equality and solidarity; it is based on the principles of democracy and the rule of law. It places the individual at the heart of its activities, by establishing the citizenship of the union and by creating an area of freedom, security and justice."

Not letting Turkish citizens in Rotterdam meet the minister and not allowing the minister reach the consulate building, in addition to the detention of the minister's adviser and security officers and Charge D'affaires Sadin Ayyıldız, was questioned and criticized by Turkish politicians for being a violation of the union's founding values. Close to the consulate, thousands of Turkish demonstrators continued to protest despite Dutch police using guard dogs and batons to disperse the crowd. In Turkey, hundreds of people flocked to Dutch missions in Ankara and Istanbul to protest the Dutch government's moves. On Saturday, the Dutch government canceled the Turkish foreign minister's flight clearance and blocked the family minister's convoy from entering the Turkish consulate in Rotterdam.

The ministers were due to meet Turkish society ahead of the April 16 referendum concerning a constitutional amendment. The Turkish Foreign Ministry asked off-duty Dutch ambassador in Ankara, who was on leave, not to return "for a while."

Meanwhile, the Dutch Embassy in Ankara and the consulate building in Istanbul were sealed off by Turkish police due to security concerns. Turkish officials said the residences of the Dutch consul-general and the charge d'affaires were also closed off.

'I thought that Nazism was over, but that I was wrong. Nazism is alive in the West'

President Recep Tayyip Erdoğan yesterday harshly criticized Dutch authorities for the treatment of Minister Kaya, saying the incidents were undemocratic, fascistic and the result of anti-Muslim developments. Erdoğan said that Turkish-Dutch relations were being sacrificed for the sake of the upcoming elections in the Netherlands.

Speaking at an event organized by the Presidency of Religious Affairs in Istanbul, Erdoğan said:

"If you sacrifice Turkish-Dutch relations for the sake of the elections on Wednesday, you will pay a price," the president said, adding that the Dutch government's actions were not in line with diplomatic etiquette and that Ankara will retaliate in kind.

The president said the actions of Dutch authorities were a manifestation of rising anti-Muslim sentiments in the West.

"I had said 'Nazism was re-emerging,' and I had added, "I had thought Nazism had ended, but I was wrong.' In fact, Nazism is alive in the West."

During another speech in the western Kocaeli province late yesterday, Erdoğan called on the EU states to stop the rise in anti-Muslim tendencies and work towards common values.

Presidential spokesperson İbrahim Kalın said it's a shame for the Dutch government to succumb to anti-Islam racists and fascists early Sunday on Twitter.

The venue owner told Doğan News Agency that the rally will not take place in his venue and did not cite a reason for his decision.

A former Dutch foreign minister criticized his government's move to cancel the Turkish minister's flight clearance. The former minister from the Christian Democratic Party, Ben Bot, criticized Prime Minister Rutte and said cancelling the Turkish minister's flight was not understandable. "In my opinion, this [move] is closely related to the elections. We defended democracy and human rights," said Bot. Bot said the move was contrary to democratic values, adding: "We took a wrong step."

Meanwhile, Macedonian Minister of State Beycan İlyas also condemned yesterday Netherland's anti-democratic and racist attitude toward Minister Kaya. "We unmasked the true face of the Netherlands at Srebrenica, no more words needed. I fiercely condemn the Netherlands' anti-democratic and fascist attitude toward Turkey's Family and Social Policies Minister Fatma Betül Sayan Kaya. I call out to Europe: From now on, remove the word democracy from your dictionaries and be ready to accept the rising sun."

Hundreds of peaceful demonstrators waving Turkish flags gathered outside the Turkish Consulate in the Dutch city of Rotterdam on Saturday, demanding to see the Turkish minister as Rotterdam police used force to disperse the crowd.

An officer hit one of the protesters with his baton until the man collapsed, and afterwards released his dog on the man lying on the ground. The dog bit the man's leg for seconds as he shouted.

Anadolu Agency and TRT are not allowed to enter the Netherlands, and the police force in Rotterdam brutally prevented Turkish journalists from broadcasting.

'We will do everything to keep relations good with Turkey'

Dutch Prime Minister Mark Rutte said yesterday that it had been a tough decision given Turkey was "a NATO ally," but he insisted: "I really think we made the right decision here." Despite the angry words, Rutte said it was important to keep good relations with Turkey. "We will do everything to keep relations with Turkey as good as possible, as strong as possible," Rutte said. The Dutch move comes after Germany and other European nations blocked other campaign events aimed at gathering support for a Turkish referendum on a switch to a presidential system, which comes just four days ahead of high-stakes elections in the Netherlands that have been dominated by a polarizing debate over immigration and the role of Muslim citizens.

Dutch political leaders hit the campaign trail Saturday, criss-crossing the country to woo voters ahead of next week's elections, now overshadowed by the bitter row with Turkey.
RELATED TOPICS