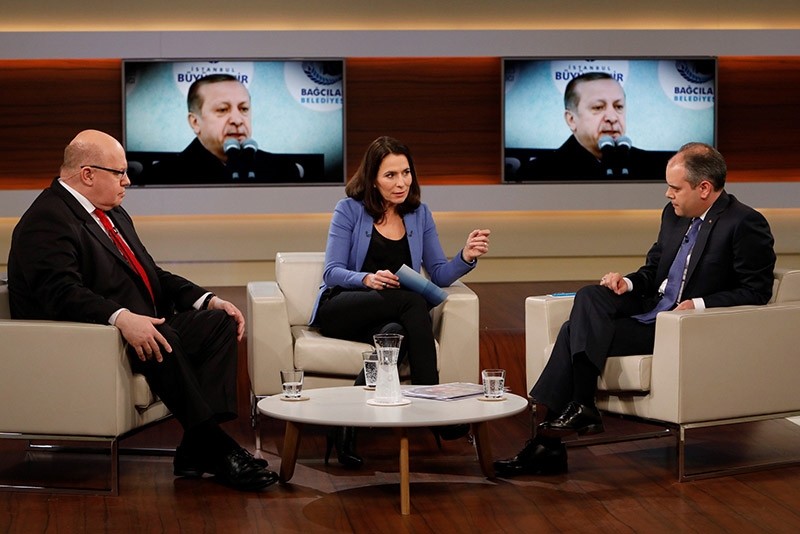 Youth and Sports Minister Akif Çağatay Kılıç and German Chancellery Minister Peter Altmaier were guests on the political talk show "Anne Will," which aired on the public broadcaster ARD Sunday. The main themes discussed during the program were the tensions between Turkey and Germany and recent events in the Netherlands.

"At an event in Cologne last year, which was organized after the failed Gülenist Terror Group (FETÖ) coup attempt, we wanted to have a live conference with our President Recep Tayyip Erdoğan, but that was prevented through a German court decision within 24 hours. In the following days however, a video message from the PKK terrorist Cemil Bayık was released during a demonstration of a pro-PKK association in Germany," said Youth and Sports Minister Kılıç criticizing the double standards of the German government.

He also condemned the German stance on the Turkish ministers' rallying in Germany and pointed out that authorities also wanted to cancel the appearance of Prime Minister Binali Yıldırım a day before the event.

Chancellery Minister Altmaier spoke partly in Dutch and criticized the Turkish government for the Nazi remarks. After being asked by moderator Anne Will whether the Dutch government had overreacted, what Altmaier thought about the Netherlands denying landing permit for Foreign Minister Mevlüt Çavuşoğlu and about the stopping of Family Affairs Minister Fatma Betül Sayan Kaya in the middle of the road, Altmaier answered with a mere, "We do not have to decide on this in Germany."

Mevlüt Çavuşoğlu, Foreign Minister of Turkey and a fellow NATO state, was denied permission to land in the Netherlands shortly before his flight Sunday. Minister of Family and Social Affairs Fatma Betul Sayan Kaya was also not allowed to enter the Netherlands at first, instead she flew to Germany and drove from there into the country. Kaya was first stopped by Dutch authorities at the Netherlands border, then on her way to the Turkish General Consulate in Rotterdam.

"You must leave the place immediately and return to Germany, if you do not do it yourself, we will take care of it," a high-ranking Dutch policeman threatened Kaya, clearly captured in several videos.

Afterwards, Kaya was escorted back to Germany by the Dutch police.

Meanwhile, thousands of Turkish citizens gathered in front of the Turkish Consulate in Rotterdam to protest the prohibitions against Turkish ministers. They waved Turkish flags and demanded to see the Family Affairs Minister, while the Dutch police intervened with police dogs and horses to separate the crowd.

At least seven people were injured and 12 others were arrested during the highly debated violent police action in Netherlands.

On April 16, the Turkish people are set to vote on a constitutional reform. Turkish citizens living abroad, including some 1.41 million Turks in Germany, can also take part in the referendum.

They will be able to cast their votes at Turkish consulates between March 27 and April 9.