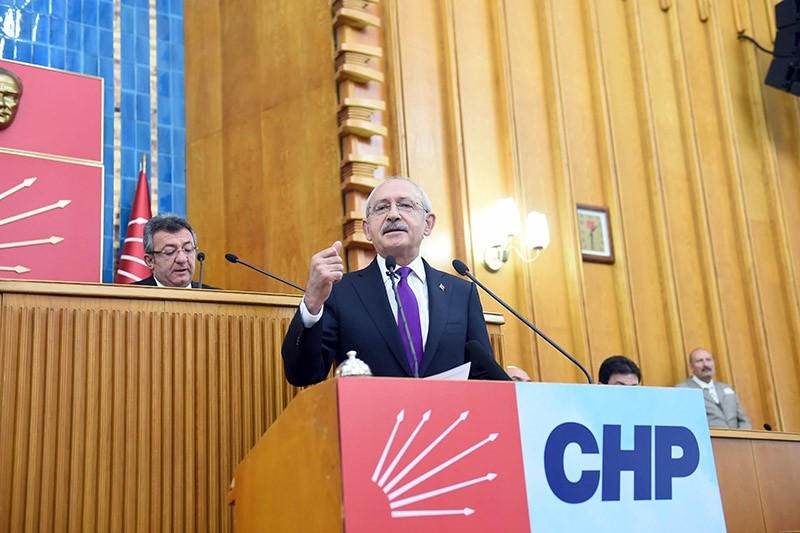 While the Turkish government accuses European countries of siding with the "No" camp vote in the upcoming April 16 presidential system referendum amid an escalating row with several countries over meeting bans, main opposition Republican People's Party (CHP) Chairman Kemal Kılıçdaroğlu said Tuesday that Europe actually wants a "Yes" vote as it has allowed such a crisis unfold.

Speaking at the CHP parliamentary group meeting Kılıçdaroğlu said, "These Europeans want a 'Yes' vote. Why else would they allow for such a crisis to unfold? They urge a 'No' vote through newspaper headlines. This is in fact means 'Yes.'"

The controversial headline referred to by Kılıçdaroğlu appeared on Monday in one of Switzerland's largest newspapers Blick, which read "Vote no against Erdoğan's dictatorship," in addition to an editorial call both in German and Turkish languages urging Turks to vote "No" in the referendum. The controversial front page drew harsh criticism from Turkish citizens.

Criticizing the Turkish government for allegedly moving too slowly in taking necessary measures following the crisis between Turkey and the Netherlands, Kılıçdaroğlu urged the government to recall Turkey's ambassador to the Netherlands. "Why did you not recall your ambassador? Why don't you recall him? Why are you not taking severe measures [against the Netherlands]?"

He said the deportation of a Turkish minister is unacceptable. "Turkey has not been aggrieved in such a way before," he said.

"You should do whatever is necessary. You cannot be aggrieved, but I am. I have to defend Turkey's interest. All kinds of sanctions should be imposed [on the Netherlands]," he added.

On Saturday, Foreign Minister Mevlüt Çavuşoğlu was refused permission to land in the Netherlands and Family and Social Affairs Minister Fatma Betül Sayan Kaya was deported from the country after being blocked from entering Turkey's Consulate General in the Dutch city of Rotterdam.

When Turkish citizens in Rotterdam tried to peacefully protest, they were met by police using batons, dogs and water cannons, in what some analysts called a disproportionate use of force.

The incidents drew strong criticism from Ankara, including diplomatic notes sent to the Netherlands in protest.