The Netherlands, Germany will regret losing Turkey as a friend 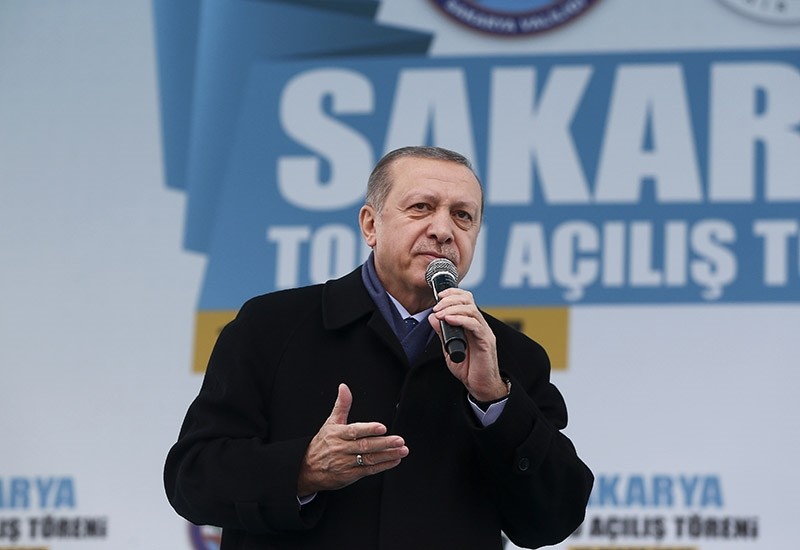 Upon the recent undemocratic treatment of Turkish ministers, journalists and citizens by Dutch and German authorities in their countries, Turkish authorites slammed the two powers, stressing that they have lost Turkey as a friend

As tensions between Turkey and the Netherlands continue, President Recep Tayyip Erdoğan, speaking to a large crowd in Sakarya on Thursday, slammed Dutch authorities as he called on Dutch Prime Minister Mark Rutte saying, "You may have become the ruling party [in the recent elections] but you have lost Turkey's friendship."

The ongoing row between Turkey and the Netherlands escalated into a diplomatic crisis after Dutch authorities blocked the Family and Social Policies Minister Fatma Betül Sayan Kaya's convoy from entering the Turkish Consulate in Rotterdam on Saturday, following the Dutch government's decision to deny flight clearance to the plane carrying Turkish Foreign Minister Mevlüt Çavuşoğlu earlier that day.

Local authorities in Rotterdam declared a state of emergency on Saturday to disperse a peaceful crowd protesting the undemocratic treatment of Minister Kaya by Dutch police. Many people, including journalists, were left injured after Rotterdam's mounted police exerted excessive force on protesters and released K9 police dogs on the crowd to clear the street.

On that note, President Erdoğan said, "Oh Rutte! You may have become the ruling party but you must know that you have lost Turkey's friendship. They claim they 'have meals together with the [Turkish] prime minister after the elections.' We have no such prime minister, it's over. You have lost."

In addition to the undemocratic treatment by Dutch authorities, Rotterdam Mayor Ahmed Aboutaleb also deployed a heavily armed special forces unit with permission to ''shoot in case of need'' as protesters gathered after Minister Kaya was barred from entering the Turkish Consulate building. The scandal surfaced on Monday as Aboutaleb said that he had deployed heavily armed security officers during a Dutch television program, called Nieuwsuur, which aired on the country's public broadcaster NOS.

Thus, President Erdoğan continuing on his statements against the Netherlands said, "As I always say, 'They are the new Nazism.' They are disturbed by this statement because they have experienced Nazi oppression. So, to the Netherlands I say, you murdered 8,354 Muslim brothers of mine in Srebrenica, how will you explain that? We do not forget this as we know very well who they are. They have murdered our Bosnian brothers and sisters."

The president further criticized the EU over not fulfilling its pledges to Turkey regarding visa-free travel for Turks.

Adding on to his remarks by further addressing some of the European states over their position against Turkey and recalling that the EU did not fulfill its pledges made to Turkey, President Erdoğan dismissed the Turkey-EU deal regarding the readmission agreement. "Forget it!" he said. In regards to the scandalous decision taken by the European Court of Justice's (ECoJ) ruling allowing employers to ban workers from wearing any religious symbols, including the hijab worn by Muslim women, President Erdoğan said, "Where is the freedom of expression and religion? They have begun a new form of combat between the cross and the crescent. There is no other explanation for this. I am telling you, Europe is hastily moving toward its days prior to World War II."

Meanwhile, Prime Minister Yıldırım also slammed Dutch authorities and said, "The Turkish nation will give the best response to the European countries on the referendum day, April 16." As Yıldırım evaluated the results from the recent Dutch elections, he stated that Turkey has "influenced the elections in the Netherlands." The prime minister also added that due to anti-Turkey positions and rhetoric, "Racism has reigned back in Europe" with the Dutch elections. Continuing by criticizing European states, especially Dutch and German officials, Yıldırım said that they are acting as "dictators" even though he said freedom and democracy are the cornerstones of European values.

'Constitutional changes package to benefit the people of Turkey'

With less than a month left until the critical referendum on the constitutional amendment which will introduce a presidential system, President Erdoğan stressed that it is to benefit the people of Turkey. "If we want your support today for the presidential system, it is because of our confidence that the new system will solely benefit Turkey and the Turkish nation. We see that the national democrats support the presidency system while the separatists and external forces oppose it. There is no reason for anyone who is a nationalist and a democrat to oppose the constitutional amendment," he said.

Furthermore, Erdoğan underlined that Turkey needs a stable government to be powerful and develop, while criticizing the problems that Turkey faced in the past were due to the two-headed system. "Do you know the cost of 11 years of a coalition government, from 1991 to 2002 for my country? It was $850 billion. If Turkey was controlled by a stable government since 1991, Turkey would be able to grow twice of what it is today, which means more than $1.7 trillion of wealth for Turkey," the president asserted.

Similarly, the prime minister elucidated on the details of the constitutional amendment package to the public in Çankırı, saying that "no" supporters are afraid of change.

The prime minister also noted that the benefits of the constitutional changes will likely provide a significant opportunity for further maintaining stability in Turkey as well as economic development. Emphasizing the need to remove the two-headed executive system, Yıldırım stressed that the decision-making process is expected to gain momentum with the presidential system.
Last Update: Mar 16, 2017 7:51 pm
RELATED TOPICS