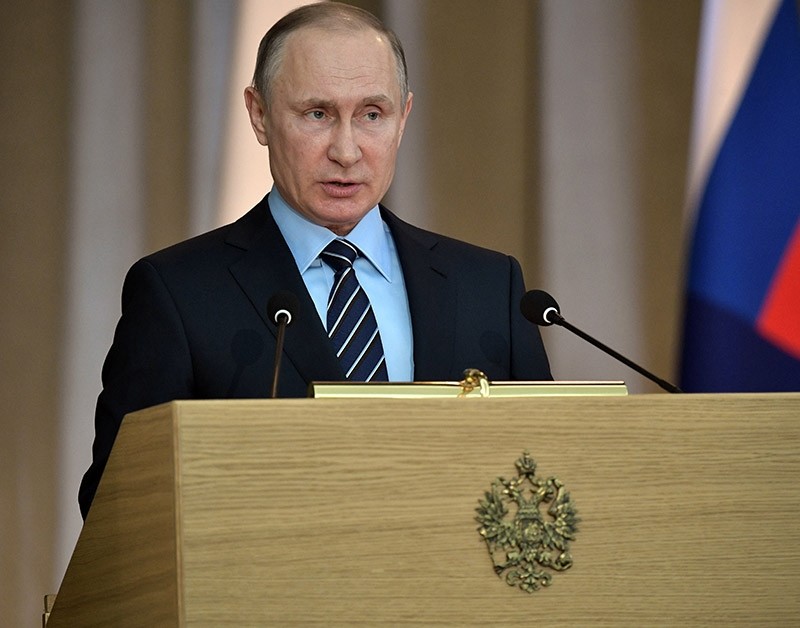 Russian President Vladimir Putin speaks at a meeting of the Russian Prosecutor General's Office Board in Moscow, Russia, 14 March 2017. (EPA Photo)
by Daily Sabah Mar 16, 2017 12:00 am

Russian President Vladimir Putin has said that relations with Turkey were returning to normal and that the two countries were entering a mutual advantage period.

Putin accepted ambassadors, who had recently taken office from 18 different countries at the Kremlin Palace Thursday.

The Russian president assessed bilateral relations, as Turkish ambassador to Moscow Hüseyin Diriöz presented a letter of credence to him.

Putin stated that his March 10 meeting with President Recep Tayyip Erdoğan productive, and that they had discussed big energy projects such as the TurkStream natural gas pipeline and the Akkuyu Nuclear Power Plant.

The Russian President also said that the two leaders evaluated the fight against terrorism in Syria and plans regarding a political solution.

"Thanks to the energetic role of Russia and Turkey, a ceasefire was reached between regime forces and armed opposition groups. We know Turkey's role [in this] and attach great importance to it," said Putin, adding that through these efforts Syria talks had been initiated in Kazakhstan's Astana.

A number of collaboration agreements in energy, trade, and intellectual property were signed during President Erdoğan's one-day visit to Moscow.

The most prominent agreement was the memorandum of understanding signed to establish a joint investment fund between the Russian Direct Investment Fund (RDIF) and the Turkish Wealth Fund (TWF), in a bid to further increase bilateral economic ties and boost investment flow.