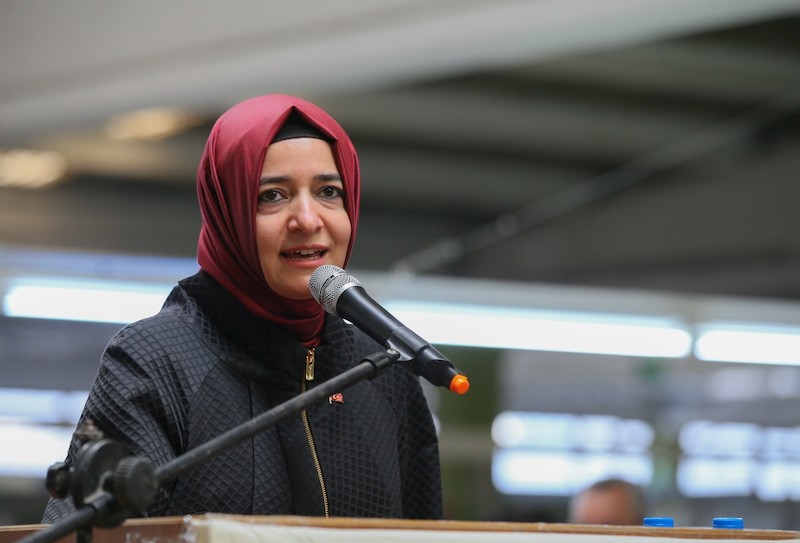 Family Minister Fatma Betül Sayan Kaya Friday described how she was treated like a terrorist by Dutch police and that she was held at gunpoint when authorities barred her from addressing Turkish nationals in Rotterdam last weekend.

Kaya gave an account of her ordeal during a visit to a women's nonprofit in the western province of Denizli.

"As if I were a criminal, a terrorist, the Dutch authorities escorted by riot police searched for me," she said, referring to the Netherlands' efforts to prevent her from reaching the Turkish consulate in Rotterdam, where she planned to speak in support of constitutional change in Turkey.

She said police officers searched her convoy, holding a photograph of her.

Although the convoy reached the consulate, a ring of armed police prevented her from entering.

"We were locked out in the car for exactly seven hours, surrounded by the police," the minister said.

"They stopped us in a way incompatible with democratic understanding and human rights. What we suffered is a dark night for the Netherlands in diplomacy history. This is a shame for them."

She added: "I wonder what kind of democracy stands by while a woman is surrounded by riot police aiming their pistols at her, not allowing her to do the basic necessities."

Kaya addressed the U.N. General Assembly in New York on Wednesday to describe the events of Saturday night, which ended with Dutch police escorting her to the German border and deporting her.

Following her treatment and the earlier refusal by the Dutch authorities to allow Foreign Minister Mevlut Cavusoglu's plane to land so he could address Turkish nationals on next month's constitutional referendum, relations between the NATO allies have plunged to a new low.

Turkey has refused to allow the Dutch ambassador to Ankara to return to the country and President Recep Tayyip Erdogan compared the Dutch authorities to Nazis and accused Dutch soldiers of complicity in the 1995 Srebrenica massacre in Bosnia.