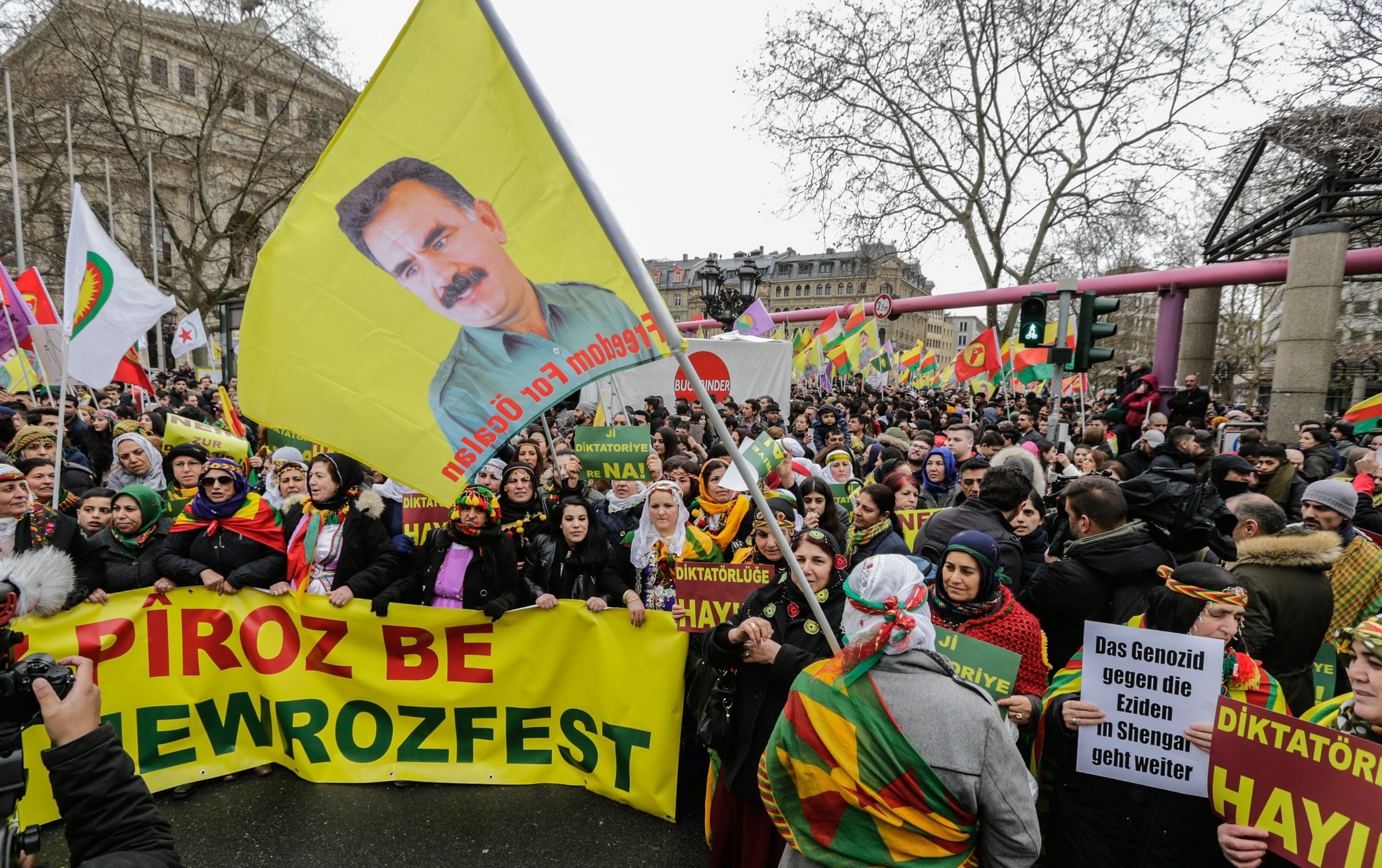 PKK followers carry a flag with a picture of terrorist groupu2019s leader and other banned posters and flags in Frankfurt, Germany. (EPA Photo)
by Daily Sabah Mar 18, 2017 12:00 am

The recent PKK march in Frankfurt drew the ire of President Erdoğan, who slammed the EU for the protective permission afforded to the PKK in stark contrast with the recent ban of Turkish ministerial meetings

President Recep Tayyip Erdoğan said on Sunday that the latest PKK march organized in the German city of Frankfurt reveals the hypocritical and hostile attitude of the EU toward Turkey. He slammed Germany for allowing the PKK terrorist organization to carry out a demonstration, emphasizing that such activities directly contradict the German and Dutch officials' recent bans on meetings that were to be held by Turkish ministers in those countries. Speaking during the meeting of a Turkish foundation in Istanbul, President Erdoğan slammed the recent bans on Turkish ministerial meetings in Europe, pointing to the EU's preferential treatment shown to the "no" campaign compared to the "yes" campaign meetings which were prohibited in Germany and the Netherlands.

"They don't give our ministers or our deputies permission to speak. Why? They let members of the PKK and FETÖ (Gülenist Terror Group) speak, however. The recent events have revealed that the EU's aims against our country have entered a new phase," he said. Erdoğan also reiterated his accusations of "Nazism" in response to Germany's recent implementations against Turkey. "Merkel, you are carrying out Nazi practices. Those [banned] ministers and deputies intended to visit Germany to address our Turkish brothers living there. Is this [ban] politically ethical? Your duty was to hand over the supporter of terrorists, not to protect them," the president said.

German officials allowed terrorist PKK followers to march in Frankfurt on Saturday, in stark contrast to the recent blocking of Turkish ministers and politicians from addressing Turkish voters in the country. Around 9,000 people marched in the central German city of Frankfurt with PKK posters and flags, openly defying the federal government's prohibition of terrorist symbols in public places.

PKK sympathizers also carried terrorist posters and flags, shouting slogans against Turkey, even though Germany's Ministry of the Interior, on March 2, updated its list of prohibited PKK symbols to include the image of the terrorist organization's jailed leader, Abdullah Öcalan.

A Frankfurt police statement said the group was permitted to carry out celebrations of Nevruz, a spring new year's festival, in two parts of the city on Saturday, adding that the main topics of the meetings were "Nevruz," "Freedom for Öcalan" and "Freedom for Kurdistan."

Meanwhile, President Erdoğan also responded to criticism that the proposed presidential system would pave the way to a "single-man" regime, saying that the new system will not dissolve the Parliament despite assertions by the main opposition Republican People's Party's (CHP). He emphasized that the system will regulate the relation between the powers.

Meanwhile, Presidential spokesperson Ibrahim Kalın said on Saturday that Turkey condemned Germany for openly supporting terrorism by allowing a PKK march. Kalın stated that the PKK march in the city of Frankfurt was just the latest scandal in what Turkey has observed as European countries trying to intervene in the upcoming referendum on constitutional reform, openly backing the "No" campaign.

"Allowing a terrorist organization to shout slogans about the upcoming referendum in our country while preventing Turkish deputies from meeting with the Turkish community in Germany is a grave example of double standards," read a statement released by the Ministry.

The decision to allow the PKK demonstration came despite German authorities blocking nearly two-dozen planned rallies by Turkish government ministers and politicians ahead of the April 16 referendum on constitutional changes in Turkey.

The moves have drawn the ire of Ankara, with President Erdoğan comparing the move to Nazi-era practices.

Nearly three million Turkish immigrants live in Germany, and around half are eligible to vote in Turkey's April 16 referendum on the proposed constitutional change for a transition to a presidential system of governance, among other changes.

Since the use of the PKK flag was banned previously by German authorities, followers of the group often carry flags bearing the image of Öcalan in rallies organized across the country, although that image too has been recently banned.

The PKK, listed as a terrorist organization by Turkey, the U.S., and EU, resumed its armed campaign against Turkey in July 2015 and has since been responsible for the deaths of approximately 1,200 security personnel and civilians, including women and children.
Last Update: Mar 19, 2017 9:55 pm
RELATED TOPICS