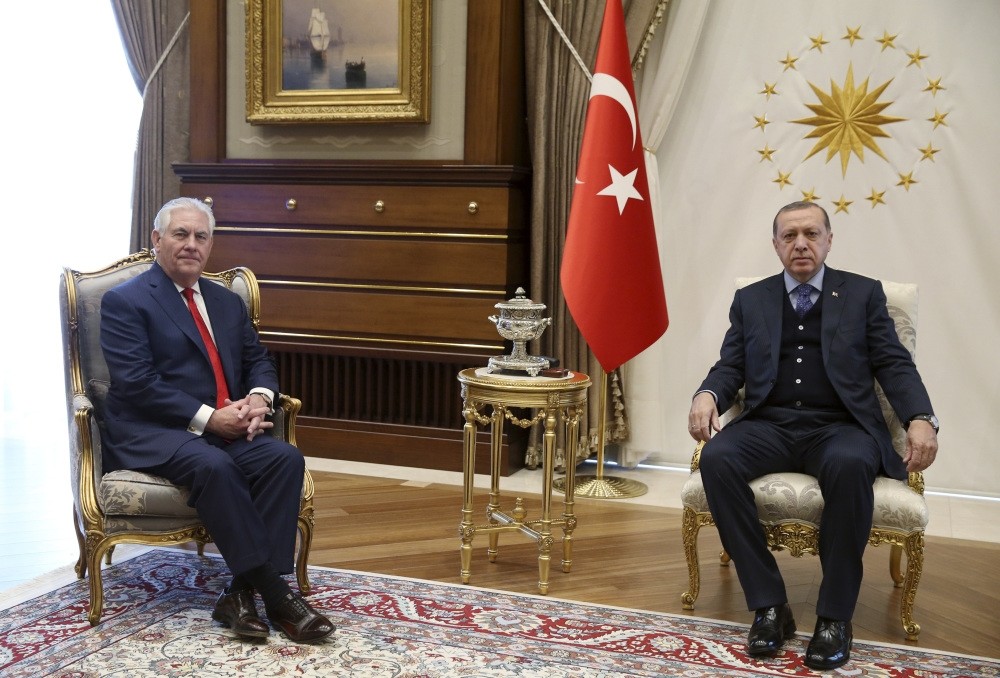 Tillerson's trip was very important due to major issues like the ongoing Raqqa operation and the overall strategy against Daesh. It was Tillerson's first visit to Ankara and his first meeting with Erdoğan.

A videotape of the start of the meeting released by the Turkish presidency shows that Tillerson and Erdoğan had a rather long, awkward handshake. I was among those thinking that Tillerson was either tired or stressed, considering Ankara's endless expectations from Washington.


Multiple sources on both the American and Turkish sides told me that the two-hourlong meeting had only three participants, Tillerson, Erdoğan and Foreign Minister Mevlut Çavusoğlu. There was not even an interpreter in the meeting at the request of Erdoğan, who does not speak English other than some pleasantries. Naturally, Turkish Minister also functioned as a translator during the meeting.

A report published by Al Monitor on last Thursday correctly identified the Americans kept out of the room: Special Envoy for the coalition against Daesh Brett McGurk and U.S. Ambassador John Bass. However, it was not only Americans, but senior Erdoğan advisors were also not present. A senior Turkish official said these types of meetings were not very unusual for Erdoğan since he had many similar meetings in the past with other foreign leaders.

However, the American side interpreted this decision as a snub against both McGurk and Bass. It is not a secret that Ankara correctly believes McGurk is one of the main architects and facilitators of the U.S. partnership with the People's Protection Units (YPG), the Syrian armed wing of the PKK, which is designated as a terror group both by Turkey and the U.S.

Some reports in the Turkish media previously revealed that Erdoğan had personally slammed McGurk during his visit to New York last September, warning him not to take pictures again with YPG officers. McGurk's pictures with YPG officers caused a strong backlash in Turkey at the time.

Ambassador Bass, on the other hand, is known to be a strong supporter of Ankara, especially with regards the stance on the YPG and Fetullah Gulen, the Pennsylvania-based Imam and alleged mastermind of the failed coup in Turkey. This is why his exclusion from the meeting was surprising for American officials. But Turkish sources say Erdoğan was not trying to send a signal, he simply wanted to spend some private time with Tillerson.

During the meeting, Tillerson and Erdoğan watched a short documentary on the failed coup attempt, according to the Turkish foreign minister. "He had asked specific questions on the locations of the attacks. He was impressed. The meeting took longer than intended – over two hours," he told journalists accompanying him to Brussels over the weekend.

The senior Turkish official briefed about the Erdoğan-Tillerson meeting said it was mostly the Turkish side that did the talking. "We reiterated our posture on Syria, especially the YPG's involvement in Raqqa," the official said. Turkey previously offered up to 10,000 troops, consisting of Turkish special forces and Free Syrian Army battalions to retake Raqqa from Daesh. "I personally don't expect any tangible U.S. step in our favor. They believe they are heavily invested in the YPG, which was a McGurk design. Still, they couldn't reject our plan," the senior Turkish official said.

The Pentagon, indeed, is planning to stick with the YPG. "Publicly, the U.S. says it's still working with its NATO ally Turkey to find a role for it in the upcoming Raqqa offensive, but here's the unspoken truth: The U.S. has also judged that the Turkish military is not up to the task, based on its performance in northern Syria," the Washington Examiner reported on Friday. According to the report, Pentagon officials said the major U.S. take on Turkey's hard-won victory in Al-Bab against Daesh was that Turkish troops lack the training, logistics and weaponry to successfully launch the siege of Raqqa.

One Washington insider said the Pentagon came up with this excuse because the U.S. Central Command and top generals do not want to change their plans in Raqqa. "They believe arming the YPG and moving along with Syrian Democratic Forces is the best and fastest plan. They don't want another adventure," he said.

The Raqqa operation is more sensitive than previous ones because the city is overwhelmingly Arab and reportedly suspicious of the YPG. This is why the Pentagon tries to highlight the Arab component of the SDF, which is supposed to be the main force fighting Daesh in the Raqqa area.

Pentagon officials previously told the media that the SDF's Arab component had more than 20,000 soldiers. One senior Turkish diplomat familiar with the Raqqa plan disagrees. "Our assessment is that they have 1,000 or 2,000 Arab fighters," the Turkish official said, showing the depth of distrust between the two allies.