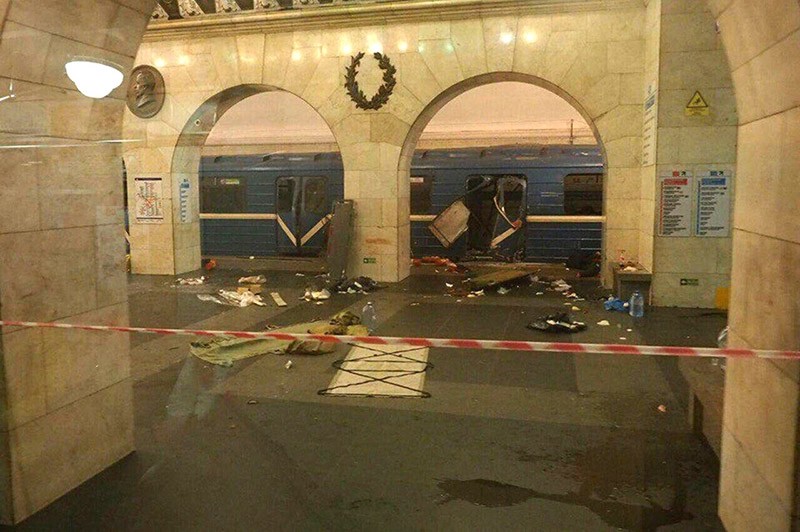 A handout photo made available by megapolisonline.ru via VKontakte (VK) shows a damaged train station shortly after an explosion in a metro of Saint Petersburg, Russia, 03 April 2017. (EPA Photo)
by Daily Sabah with Wires Apr 04, 2017 12:00 am

President Recep Tayyip Erdoğan has extended his condolences to his Russian counterpart Vladimir Putin over the St. Petersburg metro attack that killed 14 people and injured dozens of others.

Erdoğan further offered condolences to the families of the victims killed in the attack and wished for a speedy recovery to those who were injured.

According to presidential sources, the presidents also underlined that Turkey, which has been fighting against terrorism for years, understood the sorrow of Russia.

A suicide bomber was behind a blast on the St. Petersburg metro that killed 14 people, Russian investigators said Tuesday, while authorities in the Central Asian nation of Kyrgyzstan identified a suspect as a Kyrgyz-born Russian citizen.

A man whose fragmented remains have been found in the train's third car could have detonated the bomb, the Investigative Committee's spokeswoman Svetlana Petrenko said in comments carried by state news agency TASS.

"His identity has been established, but the data on him has not yet been disclosed in the interests of the investigation," she said.

There was no immediate claim of responsibility for the Monday afternoon attack, which came while President Vladimir Putin was visiting the city, Russia's second biggest and Putin's hometown.

Russia's health minister raised the death toll from 11 to 14 Tuesday and said that 49 people were still being hospitalized.