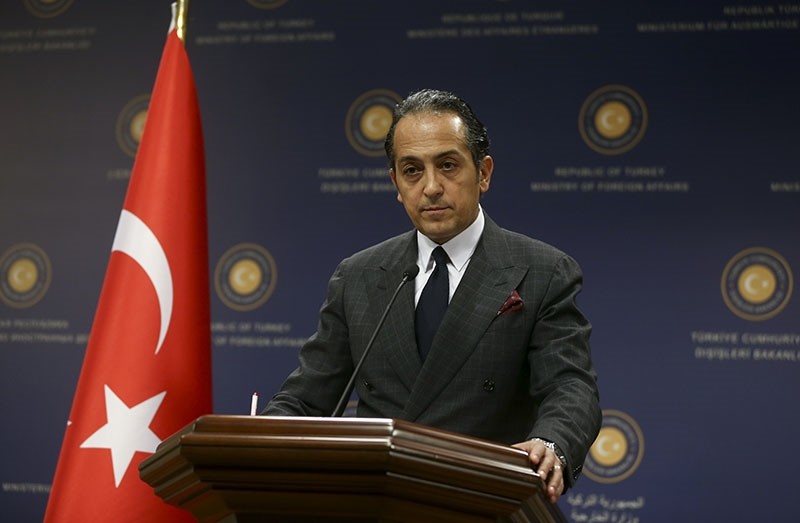 Turkey has reminded Russia and Iran of their responsibilities for preventing ceasefire violations in Syria, Turkish Foreign Ministry Spokesperson Hüseyin Müftüoğlu said after a chemical attack killed dozens of civilians in Syria's Idlib.

"Following the chemical attack, which was carried out by the Syrian regime's air elements in Idlib's Khan Shaykun town yesterday, immediate attempts were made before the embassies of Russia and Iran to bring the to the attention of our counterparts that this nefarious attack has constituted a severe violation of the ceasefire deal. The two other guarantor countries of the deal has been reminded of their responsibilities to prevent such violations to occur again and warn the party that carried out this attack, which constituted a very risky situation for the continuation of and soundness of the ceasefire deal," Müftüoğlu said during the weekly press conference in Ankara.

He added that Turkey had made extensive efforts for the ceasefire, which came into effect on December 30, 2016 to prevent further armed clashes.

Müftüoğlu noted that ceasefire-monitoring mechanism was established between Turkey and Russia and that the U.N. and International Syria Support Group countries had shared the information gathered by the two countries.

Iran has also announced that it became a guarantor of the deal in the Astana meeting held on March 14-15, 2017.

Spokesperson Müftüoğlu noted that Turkey had undertaken the responsibility of making efforts for opposition groups to abide by to the deal, whereas Russia and Iran undertook the same responsibility for the regime and its allied groups.

More than 100 civilians were killed Tuesday and 500 others, mostly children, were injured by a chlorine gas attack carried out by regime warplanes in the town of Khan Sheikoun, according to Syrian opposition Health Minister Firas Jundi.

The Britain-based Syrian Observatory for Human Rights put the death toll at 72, adding that 20 children and 17 women were among the killed. Abu Hamdu, a senior member of the Syrian Civil Defense in Khan Sheikoun said his group has recorded 70 deaths.