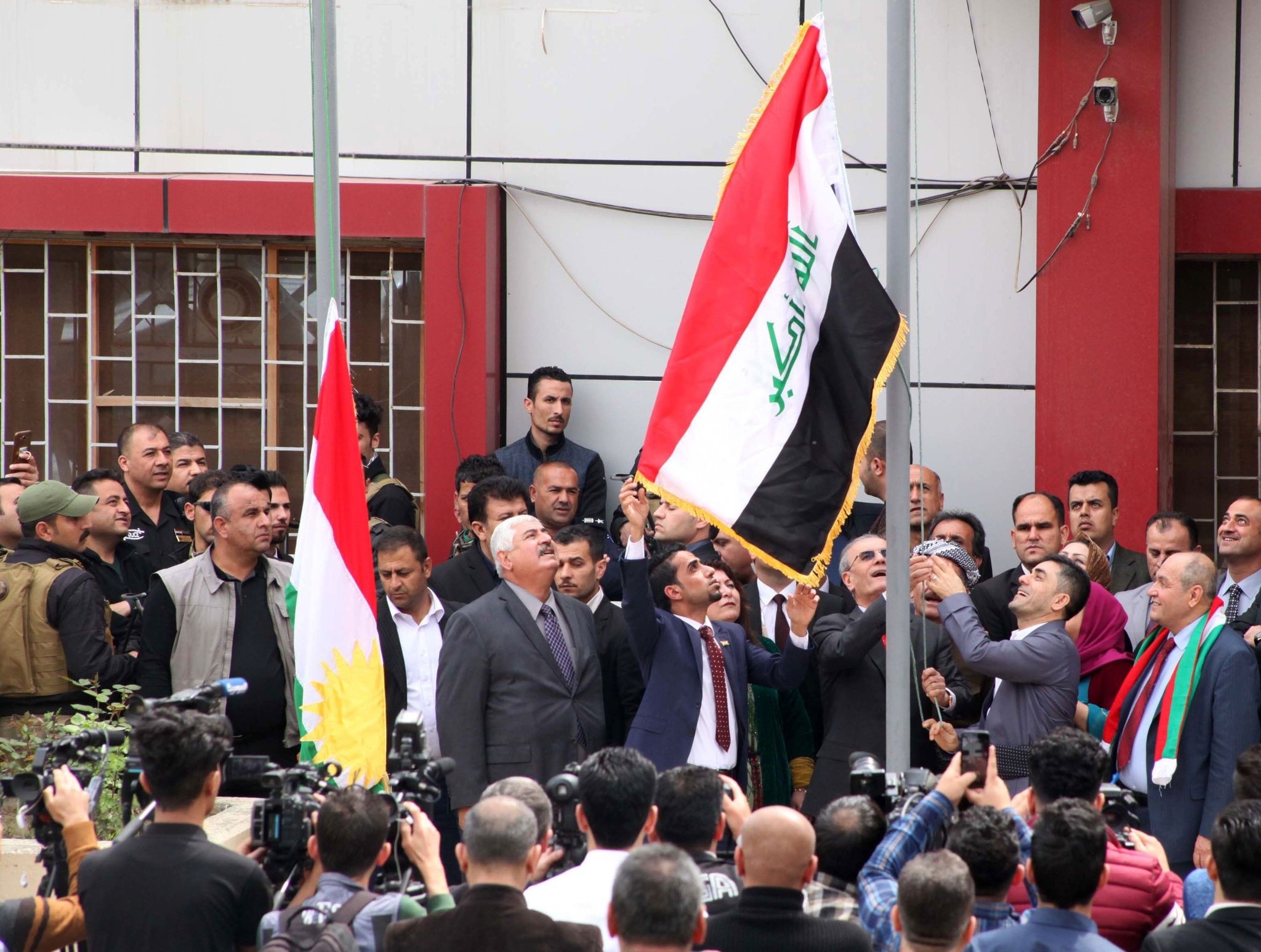 Kirkuk provincial Governor Najim al-Din Karim (C-R) raises the Iraqi flag to fly next to the Kurdish flag over a government building in the northern Iraqi city of Kirkuk on March 28. (AFP Photo)
by Daily Sabah Apr 06, 2017 12:00 am

Ankara warned the Kirkuk Provincial Council over its decision to hold a referendum on the status of the disputed province and annexation by the KRG. Turkey also defines hoisting the KRG's flag over goverment buildings as an ‘occupation attempt' of a historically Turkmen town

Speaking in a televised interview with NTV, he said: "The fact that a second flag was raised in Kirkuk seems like an occupation attempt to me. We all know that, historically, Kirkuk was a Turkmen town."

Previously, President Erdoğan urged Kurds in Iraq's Kirkuk to take down the flag of the Kurdistan Regional Government (KRG), warning that the flag might disrupt relations with Turkey. "Kirkuk belongs to everyone, including Turks, Arabs and Kurds. So do not make such claims saying 'it is ours.' There will be consequences for this; it could ruin relations with Turkey. Do not spoil these good relations," he said.

Foreign Minister Mevlüt Çavuşoğlu also spoke on Tuesday regarding the decision: "The parliament in Kirkuk does not have such authorization. The Baghdad government alone can make a referendum decision. But it is clear that something is fishy here. These steps, especially during such a fragile time, risk the future of Iraq."

Meanwhile, the parliament head of the Patriotic Union of Kurdistan (PUK), the Kurdish political party in the Baghdad Parliament, Ala Talabani, calls on the people in Kirkuk for calm. He said that Kirkuk, where "Arabization policy was implemented on Kurds and Turkmens" in the past, now hosts 750,000 immigrants.

The Kirkuk Provincial Council (KPC) ruled on Tuesday to hold a referendum on the status of the disputed province and annexation by northern Iraq's Kurdistan Regional Government (KRG) in a session boycotted by Turkmen and Arab members.

According to the unilateral decision by the KPC, the status of the city and surrounding area, classified as a disputed area in Article 140 of the Iraqi constitution, will be determined by a referendum that will ask whether the central government or the KRG should rule the province. There are 26 Kurdish members in the KPC, with nine Turkmen and six Arab members.

The Iraqi Parliament decided on Saturday to reject the decision to hoist the flag of the KRG alongside the Iraqi flag on government buildings. The Council of Representatives also ruled to suspend the sale of oil extracted from Kirkuk, noting that the income from Kirkuk's oil belongs to all Iraqis as cited in Article 11 of the Iraqi constitution, adding that it should be distributed equally amongst the KRG and other Iraqi provinces.

Speaking on the issue, Iraqi Prime Minister Haider al-Abadi has declared that political differences should be resolved -- and national unity maintained -- within a "constitutional framework." He made the assertion at a Baghdad press conference held late Tuesday to address the recent appearance of the Kurdish regional flag in the northern city of Kirkuk.

Kirkuk's local administration must comply with the Iraqi constitution and not make unilateral decisions," al-Abadi said at the press conference. "I urge Kirkuk's governor and provincial council to work towards preserving the city's unity," he said.

Addressing Governor Nahmiddin Karim and Kurdish provincial council members, al-Abadi asked: "Why take such steps when the various components of the city must cooperate in the fight against Daesh?"

The decision sparked widespread criticism in Turkey, with many officials and politicians warning the KRG to avoid unilateral moves on Kirkuk. The Turkish Foreign Ministry expressed concerns about the decision, noting that the unilateral steps regarding the status of Kirkuk will damage dialogue between those representing different ethnic and religious groups, as well as breach the country's constitution.

The flag issue also came at a time when KRG leader Masoud Barzani made remarks on holding a possible referendum on independence at the "earliest time."

Meanwhile, the Iranian foreign ministry also said the recent move by the KRG to raise its flag alongside the Iraqi national flag on government buildings is "concerning." In a statement released Monday on the ministry's website, Iranian foreign ministry spokesman Behram Kasimi said, "Raising any flag apart from the Iraqi national one is against the Iraqi constitution and might raise tension in the country."

Kirkuk is among the territories disputed between the central government and the KRG, which is defined in Article 140 of the Iraqi constitution, adopted after the U.S. invasion of Iraq and toppling of Saddam Hussein. Accordingly, the administrative statuses of these areas were to be determined with referendums by 2007, but the referendums have not yet been held due to political turmoil in the country.

Although the countryside of Kirkuk is predominantly inhabited by Kurds, the city itself is predominantly inhabited by Arabs and Iraqi Turkmens. The region was subject to an Arabization policy during the Baath Party rule, but after 2003 this policy was reversed in favor of Kurds, prompting protests by the local Arab and Turkmen population and raising concerns in Ankara. During the Daesh terrorist group's advance in northwestern Iraq in June 2014, KRG forces assumed control of the city.
RELATED TOPICS